The rising intensity and frequency of extreme weather and climate events in Canada has had an impact on many residents’ lives. It has prompted us to ask – who is vulnerable? To what extent can extreme climate events affect others around us? August’s App of the Month, a visually stunning web application called the Interactive Atlas of the Vulnerability of the Québec Population to Climatic Hazards, seeks to answer these questions for the province of Québec.

In the spring of 2017, the province of Québec experienced an extreme weather event which resulted in the flooding of 5,371 homes and evacuation of 4,066 residents. These floods were considered the third most significant weather event of 2017 by the Canadian Meteorological and Oceanographic Society.

In response to this event, the Québec government and other institutions and organizations took action. In partnership with the Ouranos consortium and the National Institute of Public Health of Québec, and with funding from the Government of Québec ’s Green Fund, the Department of Geography and the Department of Geomatics Sciences at Laval University created the Interactive Atlas of the Vulnerability of the Québec Population to Climatic Hazards.

The main objective of the app is to provide public health and land-use planning professionals, as well as the public, information on the geographic distribution of sensitive populations and their ability to cope with heat waves and hydrometeorological hazards such as floods, for prevention and intervention purposes. In other words, the app identifies groups of people in a neighbourhood who may be more vulnerable if a disaster occurs. 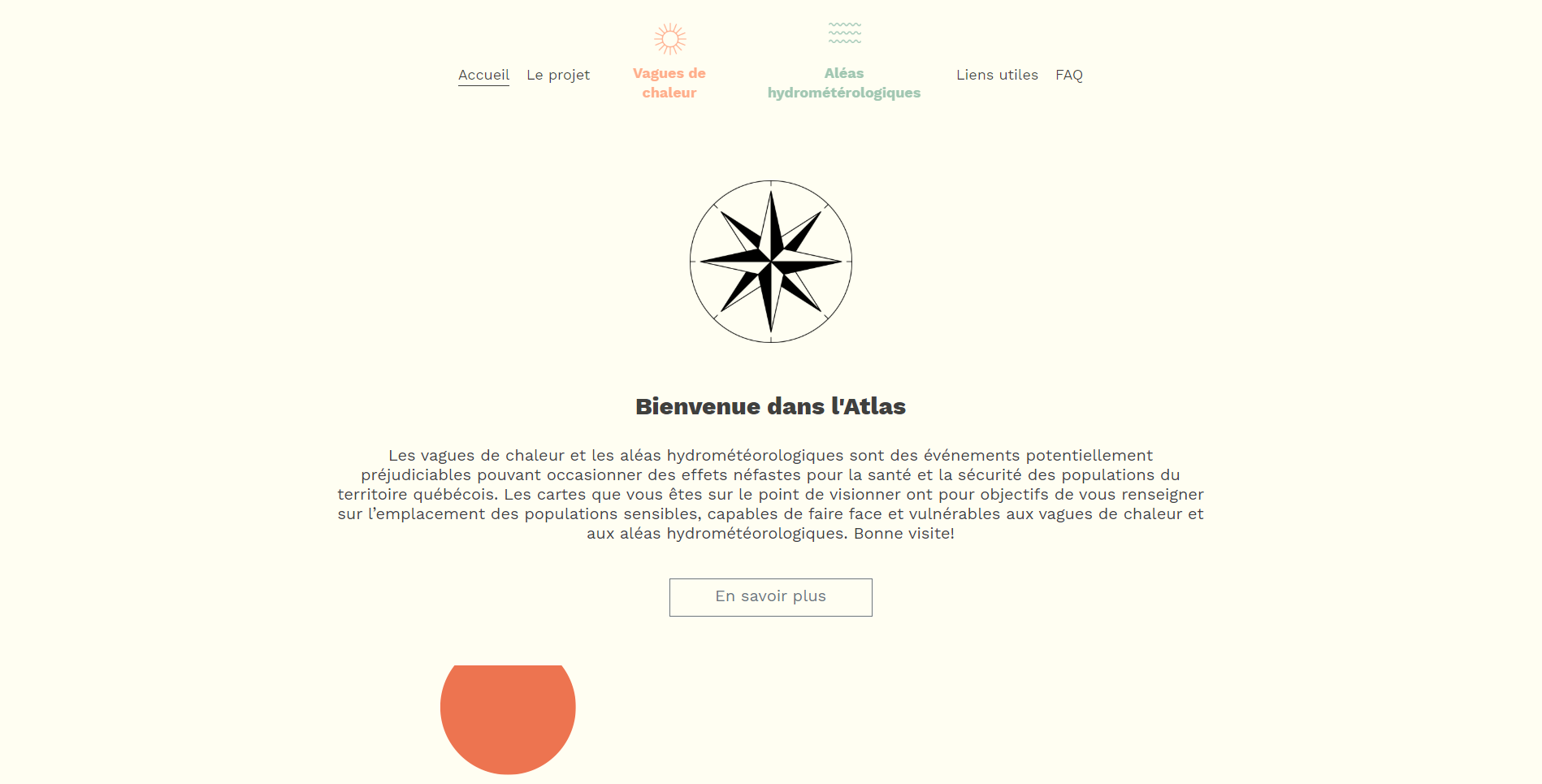 Figure 1: The homepage of the project offers a simple and visually pleasing interface to navigate.

On the homepage of the website, users have the option to click on either of the two apps in the header bar - Vagues de chaleur (heat waves) or Aléas hydrométéorologiques (hydrometeorological hazards).  There are plenty of other useful resources about the atlas available on the site, including information on data gathering and calculation processes on the FAQ page.

Each of the two links directs the user to a specific web application. The research team used ArcGIS Web AppBuilder to create two user-friendly web applications (one for heat waves and another for hydrometeorological hazards). Each app incorporates several simple analysis tools in the form of widgets so that users, especially the general public, can view and interact with the results of the project.

Nathalie Barrette, a professor at Laval University who was part of the research team, said: “ArcGIS Web AppBuilder is a great solution for presenting geospatial data. It allows you to integrate several functionalities for easy web map navigation and performing simple spatial analysis, for example, into your app using widgets.”

In both apps, users can choose to view various indices on the map using the Layer List widget. Once an index is selected, users can interact with the polygons and get a general overview of the areas that are at greater risk. 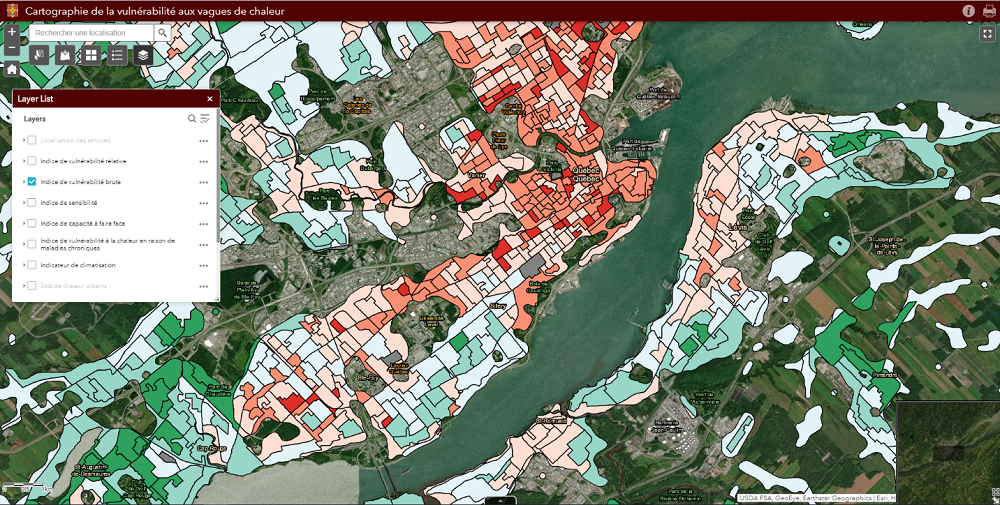 Figure 2: Using the Layer List widget to select an index to view. 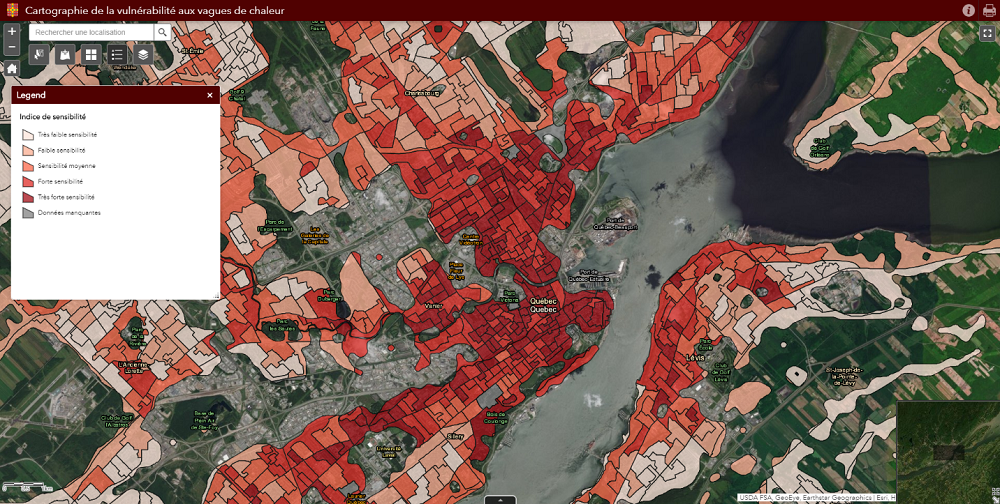 Figure 3: Viewing the sensitivity index in the Québec City region.

The second app focuses on the population’s vulnerability to hydrometeorological hazards. It includes indices such as Location of Services, Gross Vulnerability Index, Coping Ability Index, Flood Risk Areas, and 2020 Flood Mapping in Québec, among others. 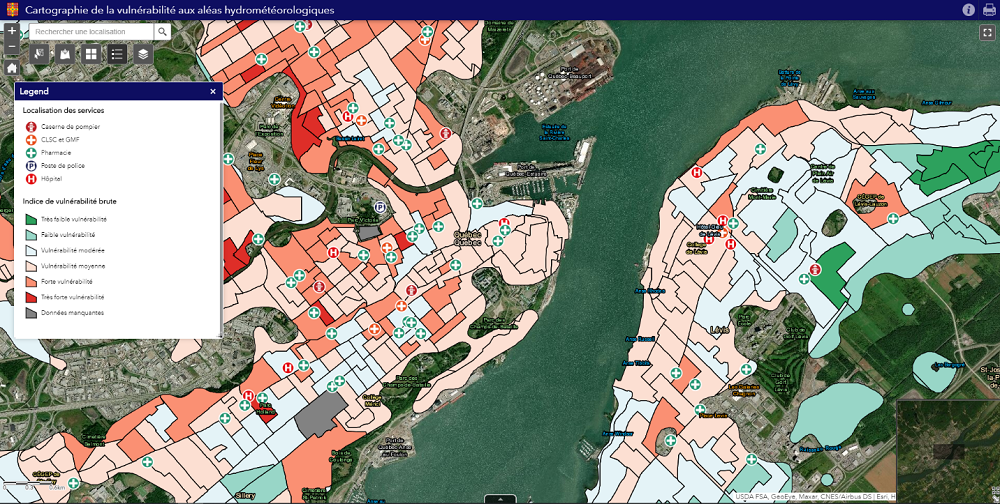 Figure 4: Viewing locations of services alongside the gross vulnerability index in Québec City. 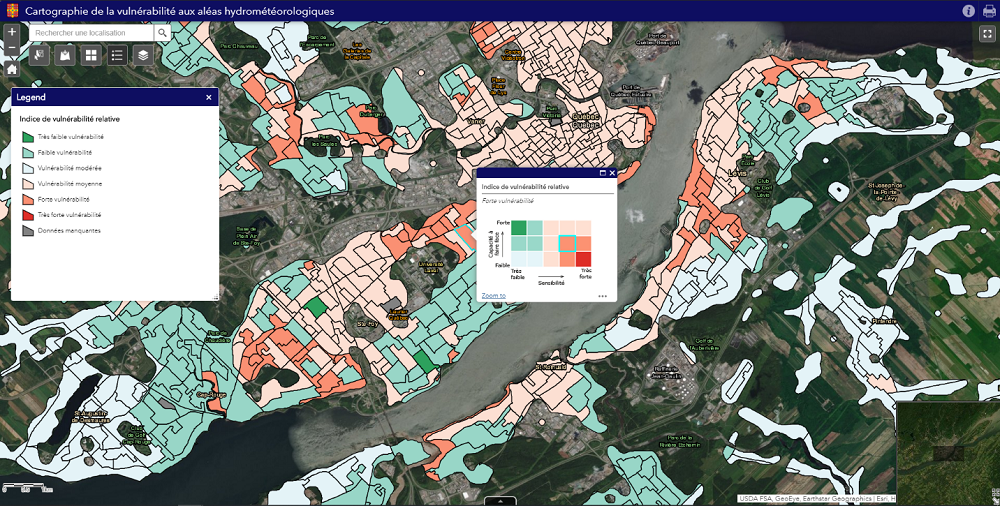 Altogether, the atlas does an amazing job of highlighting social and environmental inequalities in relation to climate change. For both academic and non-academic users, the apps display complex layers in an understandable way – using colour, graphs, descriptive fields and thorough documentation. This gives users a clear picture of how the safety and security of the population varies over different areas in Québec and stresses the importance of addressing those disadvantaged areas.

“We were surprised at how easy it was to use Web AppBuilder to develop applications for desktop or mobile devices. It enabled us to complete a web mapping project without involving programmers or developers. It helps that a large community of users for the product exists, making it easy to find information online about designing mapping projects and troubleshooting issues,” continued Nathalie.

In the future, the team would like to continue improving the app by updating climate event data, creating new variables to be used in analyses and updating demographic indices from the next Statistics Canada census. Their hope is that other research teams can draw inspiration from the methodologies that were developed and used for this project.

For a brief introduction and demo of the app (in French), check out this video.