Autumn is my favourite season because it has a lot to offer – the changing colours in tree foliage, the early sunset you see on your commute home, the pumpkin spice latte available at every coffee shop, the Halloween candies to binge on and much much more.  And like a plentiful autumn, October’s App of the Month offers an abundance of information to the public.

For October’s App of the Month, we look at Planning Information Hub, a story map created by City of Mississauga’s Planning and Building Department. We featured this app in a previous blog post when it was released a few years ago, highlighting the City’s effective use of the classic Esri Story Maps for organizing and sharing information and engaging their city planning community. Since then, the City has enhanced the app to include a 3D model of Mississauga.

With computers widely accessible to compute and visualize data at record speed, the trend in recent years is to turn 2D data into 3D. You can see that happening with the rise in augmented reality games, which offer a simulation of real-life environments. 3D visuals are great for presenting an idea because they deliver greater impact with more accurate and “true to life” measurements. Modelling in 3D also aids in driving more informed decisions faster.

These are the reasons why Mississauga created a 3D massing model of the city as part of its 3D Visualization Strategy. It was essential to include a 3D model in the Planning Information Hub to provide decision support and help engage the community in various planning projects.

When you first open the link to the Planning Information Hub, the first thing you’ll see is the impressive 3D model of the City of Mississauga. Upon further researching on the title “3D Massing Model” (since I am not an architect or planner), I learned that the purpose of a massing model is to provide the sense of space between buildings to help give perspective to planners. Previously, physical structures/models needed to be built for planners, but with technology advancements, the focus has shifted to digital modelling.

There are several Esri applications you can build 3D models with. The 3D model in this story map is displayed using ArcGIS Scene Viewer, which allows you to share interactive 3D content with your colleagues or with the public. In Scene Viewer, you can also add a narrative to the views and clips of your 3D model.

Mississauga’s 3D model was built using Esri CityEngine. According to Steve Czajka, manager of the Data + Visualization Studio in the City’s Planning and Building Department, “It was easy to generate and develop 150,000 building structures using CityEngine.”

Building a 3D model is not rocket science, majority of the time is spent on capturing the data. The workflow to build this 3D model began with capturing orthoimages then sketching 2D building outlines. Once that was completed, it was brought into CityEngine where the height of the model, as well as the details of the building, were established. The model is very detailed, as you can see in the Absolute World Towers, also popularly known as the “Marilyn Monroe Towers”. 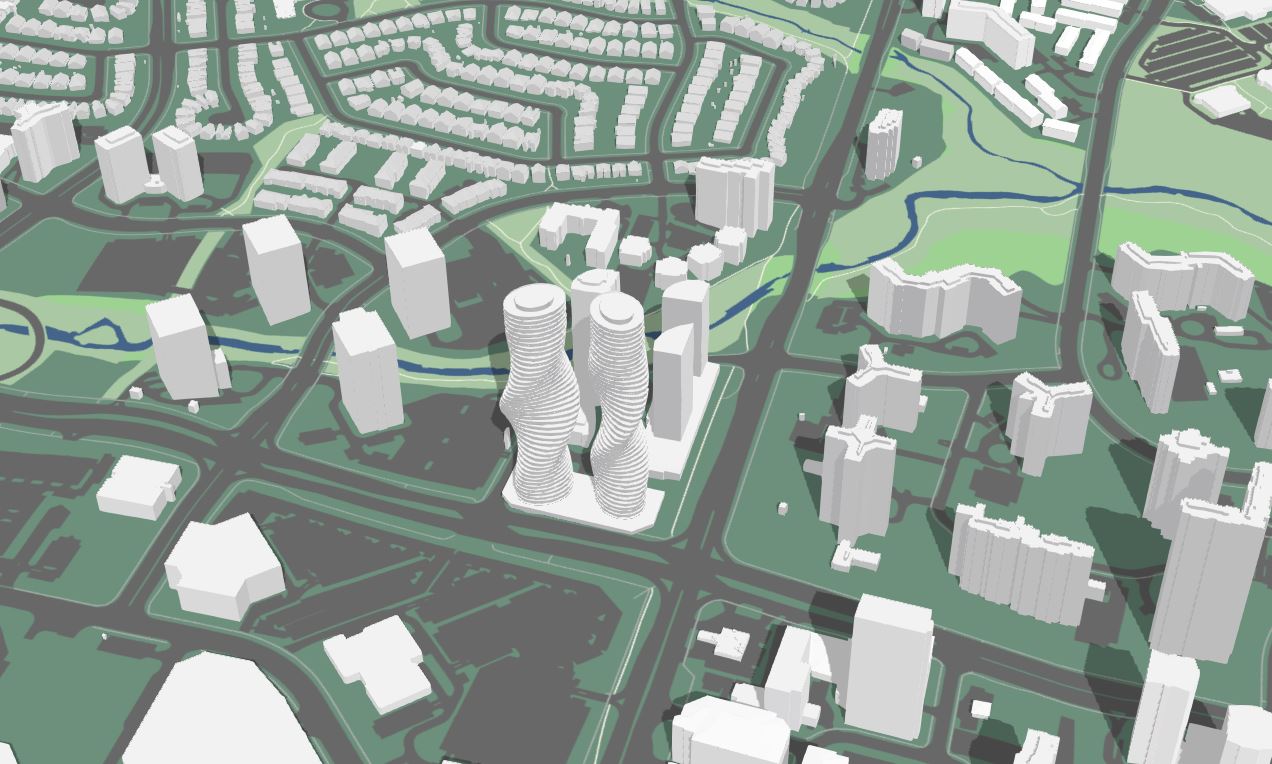 To learn more about building 3D models, I recommend watching this recorded webinar on Urban Modelling with CityEngine. You can also read this cool case study (one of my favourites!) in which CityEngine was used to help build a virtual world for the Walt Disney film Zootopia.

Mississauga’s population has grown by 8,156 people between 2011 and 2016 (Statistics Canada) to 721,599 residents. With continued population growth, there’s increasing demand for the City to share more and better quality information. The classic Esri Story Maps and the new ArcGIS StoryMaps are the perfect tools for sharing information on planning projects with the community. These tools allow you to display simulations of various planning scenarios.

Steve recalls the positive feedback they received when the Planning Information Hub was introduced, “Our planning consultants were shocked by the accessibility of the tool and the capabilities it provides to help them make informed decisions.” Regarding creating the app, he shares, “It does take time to test and develop the app, so having a well-documented workflow is key.”

Although I’ve focused this blog post on the 3D Massing Model, I encourage you too see the other components of the Planning Information Hub. It’s a good example of how Esri’s storytelling tools can be used to compile large amounts of information efficiently while providing end users with great flexibility for using the data. More importantly, it’s an effective demonstration of how cities such as Mississauga are becoming “smarter” and leveraging the data and tools they have to provide all the necessary information for their community to grow.