Dawn Wright is the chief scientist at Esri. She talks to Guan Yue about how she sees the intersection of science with the Science of Where.

Dawn Wright is the chief scientist at Esri. She is an oceanographer and an academic. I was excited to talk to her about how she sees the intersection of science with the Science of Where. 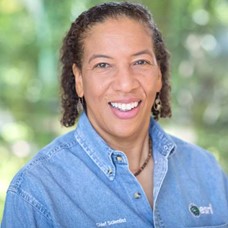 Dawn basically designed her position and she sees it as having both an internal and external objective.

Within Esri she is consulting and strengthening the scientific basis for Esri products. She introduces the business and product development teams to scientists who can help improve our products and services. While they work on spatial statistics, 3D and GeoAI, developers need to have real life thorny problems on which to test them. That’s when the scientists come in. They bring Esri’s teams issues they may have been grappling with for years. It was scientists who asked Esri to develop voxels for their 3D imagery, which give volume and produce a much more accurate depiction.

Dawn is also the face of Esri to the science world, representing Esri as a science company. That means she’s on a lot of advisory councils and boards, like the National Oceanic and Atmospheric Administration, (NOAA) which—among other things—shares information about coastal protection and marine ecosystems. She reminds them that while we work in geographic science we also touch—as Dawn calls them—“the ologies”, including biology, geology, hydrology, ecology and conservation biology, and not to forget climate science and its effect on the social sciences. She attends events held by these organizations with her colleagues who present papers and develop patents just like other big software companies do. Esri is more than a software vendor.

As she’s an oceanographer I wanted to know what she thought of our efforts to keep the ocean sustainable and how GIS is helping with that. She calls it one ocean based on the Spilhaus projection, which puts the Antarctica at the centre and shows how all oceans connect.

The ocean is in deep crisis and one way GIS is helping is by giving scientists the tools to map the ocean floor. I was shocked to learn that we have only mapped 20% of the ocean floor! Two big reasons are the technological limitations and the depth of the ocean. We can’t use satellites that we use on land. To map the ocean bottom, we use vessel-carried sonar systems that send sound pulses. These are much slower and pricier than traditional radar and the average depth of the ocean is three miles, so that also makes mapping it even more difficult. GIS is used to monitor the various parameters that affect the ocean, like the erosion of coral reefs through bleaching. You can see a dashboard on reefs on the Living Atlas (and it was on the BBC show about oceans).

Dawn Wright is doing fascinating work on using the Science of Where for nature conservation. To hear our full conversation, go to the podcast.

If ocean conservation is as near and dear to you as it is to Dawn, sign up for the Esri Canada GIS Ocean Forum.