“Our crime analysts are able to build apps and make them available internally through Portal for ArcGIS or externally through ArcGIS Online very quickly. Before, it would have taken extended periods of time, high levels of technical ability, and a lot of administration to maintain comparable applications.”
- Ian Williams, Manager of Business Intelligence and Analytics, Toronto Police Service

Did you know that the Toronto Police Service (TPS) is the oldest municipal police agency in North America? Created in 1834, the TPS predates the police departments of New York City and Boston, and is even older than Canada itself. Like the City of Toronto, the TPS has undergone many changes in its almost two centuries on the beat, having grown from five constables to more than 7,000 officers and civilian employees.

Earlier this year, the TPS officially embarked on an agency-wide program of renewal and modernization. As outlined in its recently published action plan, “The Way Forward: Modernizing Community Safety in Toronto,” the Service is placing greater emphasis on transparency, collaboration and information sharing. This major operational and cultural shift is being supported by the development of map-based software applications that present crime data and other community safety information in easy-to-understand, interactive formats.

“We used to post this type of content as static maps—PDFs or JPEGs—on our website every week,” said Ian Williams, Manager of Business Intelligence and Analytics at the TPS. “It was a manual process, very labour-intensive. At the end of the day, those maps didn’t provide much analytical value.”

Now, the TPS is gearing up to launch a whole slate of self-serve geographic information system (GIS) apps that will give the public unprecedented insight into policing activities and connect staff members with highly specialized analytical tools.

The TPS’ first foray into the world of GIS web apps was the Maps and Data Portal, a collection of crime maps, that it released to the public in October 2015. The Major Crime Indicators (MCI) map, showing a weekly tally of break and enters, robberies, assaults, major thefts and auto thefts, was developed first, followed closely by a map of shootings and homicides for the year to date. All of the mapped incidents feature clickable links for contacting Crime Stoppers or the local police division with information. The TPS later released a third app summarizing 2014 MCI data by neighbourhood.

“The public had been requesting MCI data on an ongoing basis,” said Williams. “Freedom of Information is a fairly labour- and time-intensive process for both parties, so we released the app to meet the demand for information, reduce the workload on both sides and provide more expedient public access to this content.”

When it came to developing the Maps and Data Portal, the TPS had very specific technological requirements. Since the apps were intended for the broadest possible audience (i.e., every segment of the public) they had to be accessible from all popular types of phones, tablets and computers. The apps also had to be easy to develop and maintain, with little or no need for manual updates. To satisfy these requirements, the TPS chose ArcGIS Online.

Buoyed by the success of the Maps and Data Portal (which receives thousands of hits per day) and spurred on by its new mandate for internal innovation, the TPS is now preparing to roll out the Public Safety Data Portal, an expanded collection of datasets and web mapping applications.

“We’re transitioning to an open data site where people can download the data and map it all on their own,” said Williams. “Many members of the public actually want to access the raw data; they have the tools, technology and background to do so. Other people just want to see the trends, so we’re providing embedded analytical tools as well.”

Developed in-house and powered by ArcGIS Online and the ArcGIS Open Data platform, the Public Safety Data Portal will replace the Maps and Data Portal, becoming the TPS’ central hub for public information. This upgraded toolset will offer new versions of the MCI and shootings/homicide maps, plus a variety of apps related to traffic incidents, pedestrian and bike safety, awareness campaigns and other initiatives.

“The public expects us to be more transparent with our activities, to properly and thoroughly explain our work,” said Williams. “We want to provide the public with information about what’s happening in the community. The community connection is very important for us.”

While ArcGIS Online has proven ideal for sharing community safety information with the public, it was never intended as a GIS panacea. The TPS also identified the need for a separate, secure environment in which to host internal GIS apps and sensitive operational datasets.

“We’ve been using GIS for at least 15 years, but until three years ago, we were using desktop only—no centralized GIS functions or geodatabase,” said Williams. “We took a big step forward when we partnered with Esri Canada to develop an enterprise solution.” 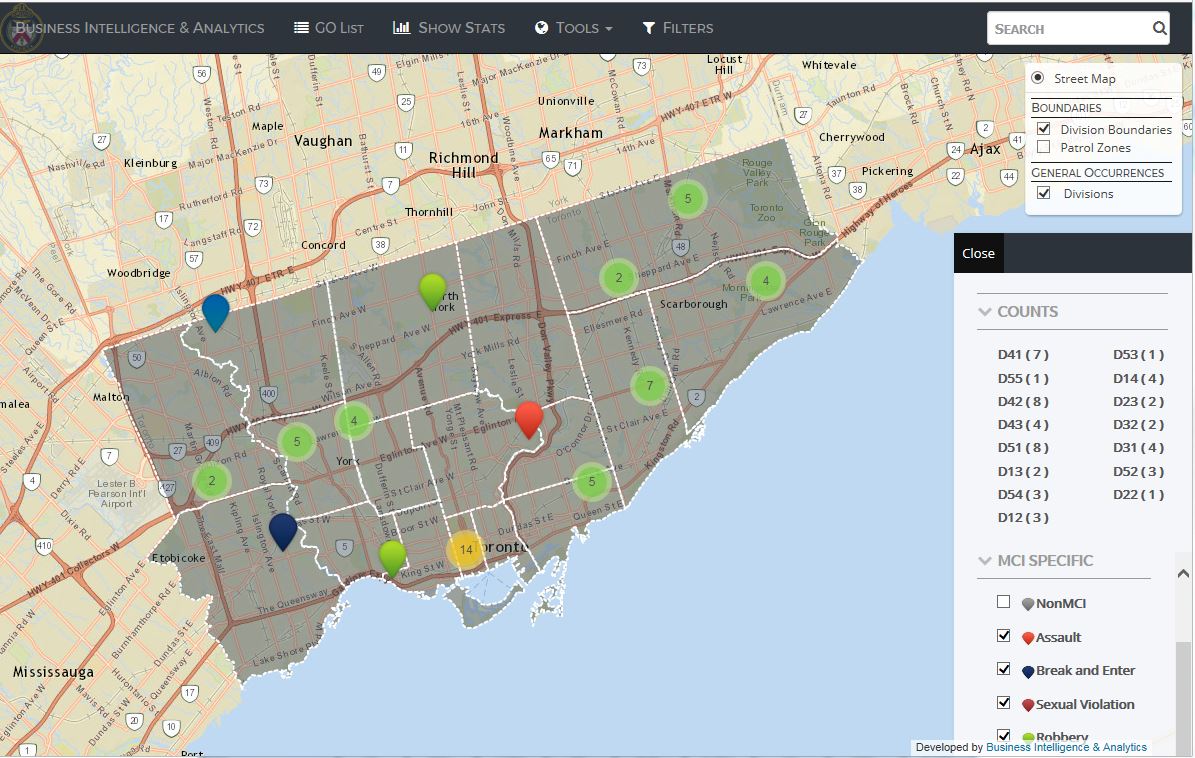 At a glance, TPS analysts and officers, and the public can easily view the number and distribution of crimes across the city through the Major Crime Indicators (MCI) map. 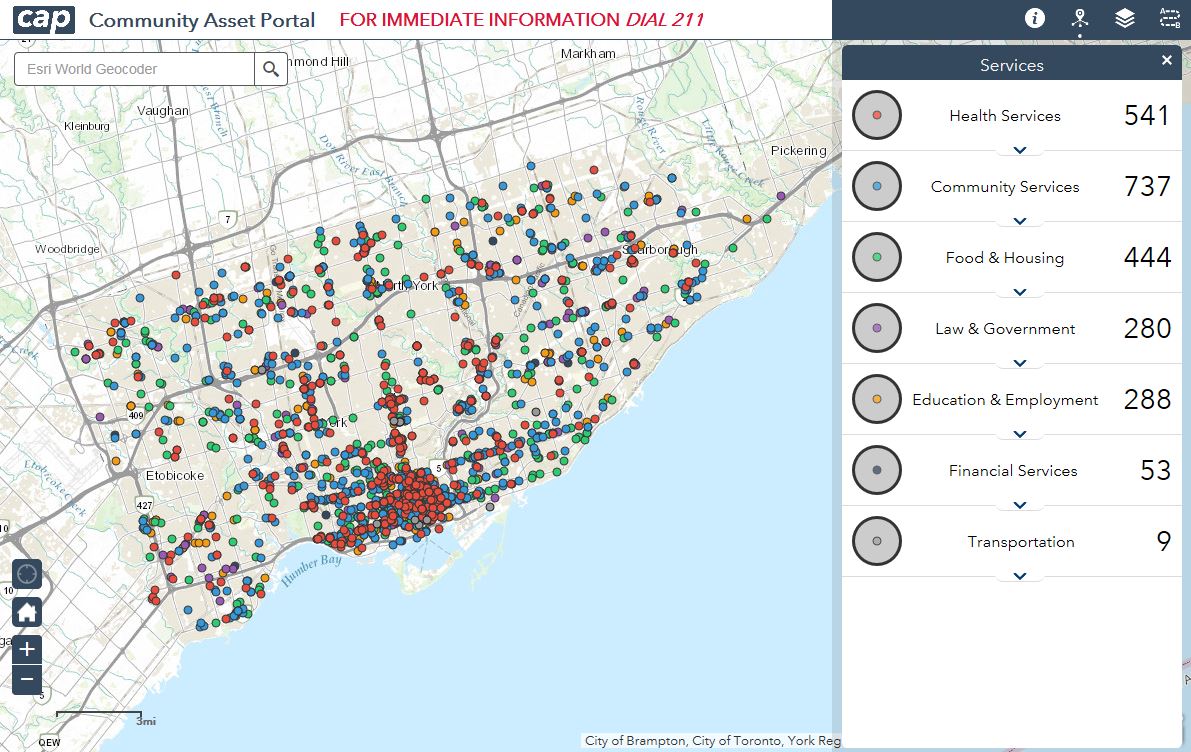 Through the Community Asset Portal, TPS officers can quickly locate nearby Findhelp/211 resources and connect people with the appropriate service they need.

The TPS selected ArcGIS Server as the foundation for its internal system. As befits an essential service like policing, the enterprise solution was designed for high availability—zero downtime—and has built-in disaster recovery. The system features Portal for ArcGIS, for securely deploying internal apps, as well as a central geodatabase.

“Our crime analysts are able to build apps and make them available internally through Portal for ArcGIS or externally through ArcGIS Online very quickly,” said Williams. “Before, it would’ve taken extended periods of time, high levels of technical ability and a lot of administration to maintain comparable applications.”

The ease with which staff members can now develop ArcGIS apps is allowing them to build highly role-specific internal tools. One example is an app that gives analysts direct access to the RMS and CAD data they need to present local crime scenarios in real time. Another example is the Community Asset Portal.

The Community Asset Portal (CAP) is a new app the TPS has developed in partnership with Ryerson University, the City of Toronto and Findhelp/211, a Central Ontario Region agency that provides 24/7 helpline and community and social services information.

The CAP is designed to provide frontline officers with locational awareness of nearby Findhelp/211 resources, such as mental health or youth services, along with contact details and hours of operation. When officers encounter a situation that is beyond the scope of traditional policing, the tool will enable them to quickly connect people with the type of help they actually need, ideally within their communities.

This app is currently being piloted by a group of frontline officers equipped with small-form tablets. Feedback has been positive so far, to the extent that the TPS released the app as part of Mental Health Awareness week.

According to Williams, much of the agency’s success with GIS can be attributed to good listening skills. In particular, he emphasized how crucial it is to spend time with stakeholders, understanding their concerns and learning about their needs, whether it’s through workshops, meetings, surveys or job-shadowing arrangements.

“All of our analysts do ride-alongs with frontline police officers, and they also spend time at the divisions supporting crime, traffic and order management at the local level,” said Williams. “They get feedback and input in real time, and see firsthand how the technology is used and how it can be enhanced.”

The TPS has also benefited from the use of templates. In fact, analysts are encouraged to put more upfront work into their projects because experience shows that even the simplest of tools often have unforeseen applications. Sometimes, that just means sharing the app more widely; other times, it means using it as a template for a brand-new tool. Sharing apps is just one example of a broader knowledge-sharing culture that is taking root at the TPS.

“Part of our evolution has been to create a user group to discuss key GIS-related issues,” said Williams. “Members include central crime analysts, analysts from other investigative units, as well as people from operational support, communications and IT. Our vision is to merge GIS technology with business technology and really empower people’s use of information.”

As Williams sees it, the Way Forward is taking the TPS into uncharted and exciting areas of innovation that pose the possibility that smart, map-based solutions will be in great demand for the foreseeable future.