Poor or incorrect map labelling will not only detract from your map but render it useless to your users. Learn what the Community Map of Canada is doing to ensure that the correct labels are being used across the country.

Judge a Map by its Labels

Picture this. It is sometime in the early 2000s. Smart phones are not yet widely available. (Yeah, I know that is like 20 years ago). Just stay with me.

You’re in a new city, and you’re lost. You have a paper map in hand – remember those? – and you’re trying to figure your way around. The thing is, the map is poorly labelled that you’re more confused reading it than you are trying to understand where you are.

As a cartographer and someone who creates public consumption maps for a living, I can assure you that accurate map labeling is imperative to the success of your map. Bad labelling decreases the legibility of your map and therefore defies its purpose.

It gets more complicated when labelling is associated with a controversial feature. For example using  Sea of Japan vs. East Sea vs. Korean East Sea or Persian Gulf vs. Arabian Gulf vs. the Gulf can turn the map into a political statement, which brings us to conclude that determining which name to use is equally important, if not more in certain instances, than the label placement itself.

Here at the Community Map of Canada, we rely on national and authoritative sources for everything on the map; be it content or feature names and labels.

English and/or French labels on the Community Map of Canada basemap have always come from the Canadian Geographical Names Database, an open government license database of over 350,000 features across the country. This database is recognized by the Geographical Names Board of Canada, the authority figure on geographical names in the country comprising members from each province and territory as well as the federal government. 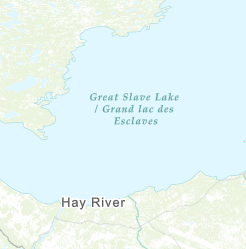 Leveraging this federal authority, the Community Map of Canada basemap saw an improvement on its bilingual labels for 75 pan-Canadian significant features, as well as 101 places with official names in both languages. 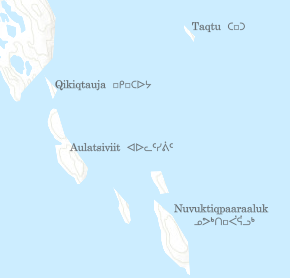 Also included in the Geographical Names Database are over 23,000 feature names in 84 Indigenous languages and dialects, something previously missing from the Community Map of Canada basemap.

Missing that is until late last year when the team embarked on a journey to see the addition of 1,819 Indigenous place names with syllabics, mostly in the eastern Arctic, to the basemap. This is only the start, we promise.

We’ve ran into a snag once or twice with features that have multiple official names. Mackenzie River, for example, has seven (7) different names. Meeting all official requirements remains a foundational component of the Community Map of Canada and we will continue to work on it.

If you come across an error of any sort, incorrect or missing contents and labels, let me know using this nifty little survey.

I encourage you to check it out. Use it for your next application or just give it a whirl for the fun of it, if you’re a geo-geek like I am.