This past month I celebrated not one, but two, milestones at Esri Canada. I've completed 10 years of service with Esri Canada and I now also hold the honour of being the technical support analyst with the most support cases under his belt (6,740 cases, but who's counting, right?) This officially surpasses our previous titleholder, my Esri Canada colleague Mike Gregotski, who held the honour since 2005. Over the years, I've experienced the release of 10 versions of ArcGIS for Desktop and a myriad of new products. Mike started with Esri Canada in 1998, so I thought it would be fun to take a look back at some of the popular products from that era, which have long since faded into memory.

So, let's go back. The year is 1998. Just picture it. On TV, it's Seinfeld's last season and everyone is watching E.R. and Friends. When you flip on the radio you inevitably hear Will Smith's "Gettin' Jiggy Wit' It" or the Barenaked Ladies' "One Week". Grunge and goth are both pretty popular looks with younger folks. And every single time you go to the water cooler you hear a new joke about Bill Clinton and Monica Lewinsky. Remember? At Esri Canada, our eight-person technical support team is hard at work supporting the latest version of ArcView 3.x running on the very new and sophisticated Windows 98 machines. We're still going by the acronym 'ESRI'. 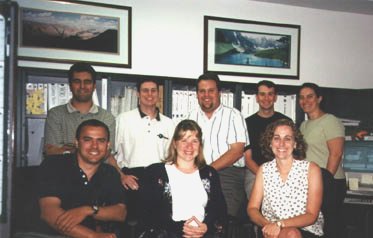 Back then, ArcGIS for Desktop was still in development, the launch of ArcGIS for Server was off in the distant future and ArcGIS Online was not even something the average GIS user could imagine. However, ArcView Internet Map Server (IMS) was introducing users to the power of GIS on the Web, MapObjects was opening doors to developers and ArcInfo Workstation was helping GIS technicians accomplish complex geographic analysis.

So, aside from ArcView 3.x, ArcView IMS, MapObjects and ArcInfo Workstation, what other products were being used by Esri users back in 1998? Out of the 6,207 cases that were logged by customers in 1998, here are the other products that were heavily used:

Flashforward to 2014, our technical support team now has a little over 30 analysts and we handle approximately 11,000 support requests per year. The number of products we support has grown considerably since 1998; we are helping users with newer products like ArcGIS Online, Esri Business Analyst for Canada and the ArcGIS API for JavaScript. We also support more established products like ArcGIS for Desktop, ArcGIS for Server and ArcPad. Behind the scenes we are always busy trying to stay ahead of the curve by learning new products, such as ArcGIS Professional, so we're ready to help users once they're available to the public.

Do you have GIS memories that you'd like to share with us? Leave us a comment below; we'd love to hear some of your GIS stories from yesteryear.