What is intelligence? And does it apply to the commonly used term, artificial intelligence? In my last blog post, I discussed the origins of GeoAI and how it has evolved over time in parallel with the advancements of AI in general. To move beyond this point and understand the fundamentals and mechanics of a GeoAI system, we need first to take a small step back and ask ourselves larger questions about the nature of intelligence.

Pause for five minutes and write down answers to the following two questions on a sheet of paper: “What is artificial?” and “What is intelligence?” Now consider how you might concatenate your answers to the term “artificial intelligence.” If you can do so in a simple way that can be mutually understood and agreed upon by the general public, philosophers, and scientists, then you have achieved a true definition of AI.

Artificial can be defined simply as matter that has not been constructed either organically or by geophysical (or atomic) forces. Intelligence is a far more complex term to define, as it is a relative concept. There are multiple theories on the nature of intelligence, but we’ll focus on Gardner’s Theory of Multiple Intelligences, as this is a recent, popular theory that is straightforward to explain. According to this theory (Frames of Mind: The Theory of Multiple Intelligences by Howard Gardner), there are eight types of intelligence:


If we examine the eight types of intelligence separately, it is difficult to find a single definition for the term intelligence, because it comprises multiple and often interlinked components. Even if we can establish a unified definition of intelligence, based on the figure below, could we use it to answer the question “Who is intelligent – a scientist, a self-sufficient hunter, or a musician?”

Many people will select the scientist as being intelligent without giving the question much thought because scientists are associated with inventions, they provide insights to decision-makers, and make historic discoveries (e.g., vaccines, nuclear weapons, transporting astronauts to the moon). In contrast, what can we say about the abilities of self-sufficient hunters and musicians? A self-sufficient hunter can memorize every detail in their environment for navigation and resource inventory purposes and know how to hunt efficiently, while a musician has the ability to create sounds that vary in tone, pitch, and length and to follow aural and visual cues from other musicians.

The purpose of these examples is to convey that each individual is intelligent in their own way and in their unique approach to problem-solving. Thus, as shown in the following figure, intelligence can be defined as the continuous ability to learn by recognizing problems and recursively solving them with logic and creativity, and then making inferences from the problems and solutions to make decisions and bring about changes. 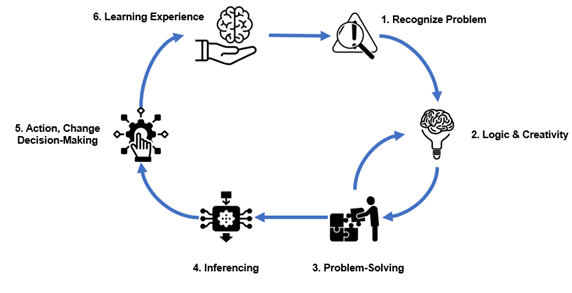 However, many studies have shown that the concept of intelligence including human intelligence is shaped by goals that reflect an individual’s socio-cultural values, which are heavily influenced by their environment (e.g., Sternberg et al., 2004). For instance, in some cultures, intelligence may be seen as applied problem-solving and verbal and social competence, whereas, in other cultures, it may be seen as inter- and intra-personal intelligence, intellectual self-assertion, and intellectual self-effacement. Perceptions of intelligence also change over time due to a continuous feedback loop formed by applied intelligence (the way of thinking and of applying thought which is in a state of constant evolution), cultural values (societal needs and wants), and environmental backgrounds (economic and political circumstances). You can read more on how these components interconnect in the book, Sapiens: A Brief History of Humankind by Yuval Noah Harari.

This cycle of the evolution of intelligence remains integral to a culture until a catastrophic event (e.g., collapse of civilization, major population loss) or a radical change (e.g., democracy to authoritarian rule, extraterrestrial colonization) occurs. In general, we experience this cycle subconsciously in our everyday lives and the by-product of applied intelligence continues to shape our cultural values and surrounding environment.

How AI has evolved

The concept of AI has progressed over the past six decades, and as a result has changed our cultural values and surrounding environments. AI in the 1960s was perceived as the automation of robots (e.g., Unimate) that could perform repetitive tasks that did not require much if anything in the way of decision awareness. These devices were embraced by executives for use primarily in manufacturing industries and remain centrally important to manufacturing automation today. As a result of automation, many factory workers lost their jobs, but machine automated manufacturing inaugurated an era of computing and information and significantly increased economic output. In response to this new (3rd) industrial revolution, developed nations (e.g., Canada, United States, and countries in the European Union) made significant investments in science, technology, engineering, and mathematics (STEM) programs at universities; fostered growth in companies; and recruited talented immigrants to work in these new high technology fields. These changes in environment and cultural values have immensely transformed applied intelligence, eventually contributing to the evolution of the concept of AI beyond simply machine automation.

Present-day AI co-exists with us and has altered decision-making in our daily lives for everything from research to business to consumer behaviour. For example, if you were born in the 1990s and earlier, do you recall a time when movies were rented from stores like Blockbuster? If you wanted to watch a movie, you would have to go to the nearest store and then spend time looking through the options and choosing which movies you wanted to rent. Fast forward to 2006, when Netflix introduced machine learning (a branch of present-day AI) to predict the movies an individual would like to watch based on their prior viewing choices. This allowed Netflix to make personalized movie recommendations, sparking the sudden shift of users from rental stores to online movie subscriptions and then movie streaming, which changed consumer culture. Originally, Netflix founders wanted to sell their company to Blockbuster for $50 million. Blockbuster didn’t take them seriously. Four years later (2010), Blockbuster declared bankruptcy and Netflix became the dominant streaming platform globally. Just as automated machines displaced factory workers, a machine learning-based business model is displacing one more reliant on human time and attention.

The diagram below illustrates other examples of the intelligence feedback loop from the 1950s to present day where applied intelligence has led to the creation and development of AI use that has made an impact in our culture and environmental settings, and environmental and cultural forces that have driven the development of AI. The AI of today is not the same as the AI of the past, nor will it be the same in the future. Thus, it is difficult to establish a universal definition of what constitutes AI. Each letter in the diagram (a through m) is described in the next section.

How can we define Artificial Intelligence?

Return to the sheet of paper from your brainstorming at the start of this blog. From the above discussion, again try to define artificial and intelligence separately, combine your definitions, and then simplify the result. What do you get?

Artificial: Not been constructed either organically or by natural forces.

Intelligence: A continuous ability to learn by recognizing problems and recursively solving them with logic and creativity, and to make inferences to bring about changes for a purpose.

Artificial Intelligence (rough definition): Not constructed either organically or by natural forces, but can learn continuously through recursive logical and creative problem-solving methods and make inferences from problem-solving in order to bring about changes for a purpose.

Artificial Intelligence (refined): A computer or machine that continuously learns through recursive problem-solving abilities and uses its learning to make decisions for a specific purpose.

In this context, what is the purpose of AI? In the diagram above, the first use cases were the Cold War and space race 1.0. The sudden advancements in military, space and aerospace research and achievement, and computational technology were by no means an accident. They were caused by ideology and superpower competition between Communism, led by the Soviet Union, and Capitalist-Democracy, led by the United States. Similarly, this applies to the first AI race and space race 2.0 amongst advanced nations (e.g., China, USA, Israel, and advanced countries of the EU). Competition fuels innovation and evolution. Whichever nation has successfully built advanced AI systems will lead the entire world as an economic, military, and academic superpower. Below is a description of each step from the previous diagram. Note that the diagram is quite simplistic to cover six decades of global change, but it paints the idea.


In summary, we have globally gone through four major changes in environment, six transitions in culture, and three applied intelligences or three transformations in AI. At the micro-level (e.g., businesses or individuals), the transformations of AI have been caused by personal and societal initiatives to improve current lifestyles, such as reducing advanced manual labour (e.g., driving) through automation and augmenting human intelligence. Additionally, advancements in AI have the potential to open up new technologies and opportunities that we have yet to see, such as creating new material composites and propulsion technologies, shifting educational standards, developing novel medical treatments, and augmenting the human body to create superhumans (Homo Deus by Yuval Noah Harari).

Current AI systems have achieved moderate proficiency in visual-spatial, logical-mathematical, and musical intelligence but remain in a state of relative infancy in bodily-kinesthetic and linguistic verbal intelligence. As for interpersonal, intrapersonal, and naturalistic intelligence, we are nowhere near to developing such AI systems. Even we, as humans, have difficulty mastering one or more of the types of intelligence that encompass emotional understanding. Developing an emotionally intelligent system will require a monumental effort and collaboration between visual-spatial, logical-mathematical, interpersonal, intrapersonal, and naturalistic professions, such as AI researchers and computer scientists paired with psychologists and neuroscientists among others.

If an emotional artificial intelligent system is successfully developed, it may become less “artificial” and more aware of other types of “intelligence” so that it could function without needing to be programmed or directed by a human being. At that stage, humanity would have achieved artificial cognition – a system of interconnected AI systems that can truly create and execute decisions on its own, consider consequences, and master problem solving.

Many people think of AI as a machine or computer that intends to emulate human cognitive abilities. However, the concept of intelligence is dependent on the types of intelligence involved and is constantly changing as the surrounding cultural and environmental settings change. Fundamentally, our ways of thinking have remained the same throughout history but there have been small changes over time due to creativity, competition, and ambition, and these changes are reflected in the evolution of AI. Both AI and its definition continue to change over time but there is a preference to not “emulate human cognitive abilities” in the definition as we don’t know if AI can achieve the level of human cognition nor if it will have its own unique problem-solving approaches.

Artificial cognition is a more appropriate term when a machine or computer is able to think on its own to execute tasks for a cause, regardless of whether it is aligned with human interests or not. The current state of AI is in no way close to artificial cognition. Rather, AI, especially in deep learning, contains complex elements that often surprise us in how it automatically learns and solve problems in which it augments our decision-making processes. In the next post, we will flesh out what the elements are that make up an AI system, delineate the types of AI abilities, and illustrate possible approaches to achieve artificial cognition.