Branham Group is the analyst firm behind the Branham300, an annual report that ranks public and private information and communications technology (ICT) providers in Canada. Find out how Branham enhanced its report with interactive maps.

The statistics speak for themselves. In 2016, the Top 250 ICT Canadian companies set a new revenue record of $105.3 billion, representing a year-over-year increase of 9.6%. In addition, 73% of these companies grew their revenue and 54% achieved double- or triple-digit growth. The Top 250 Canadian companies have delivered annual revenue growth since 2010. 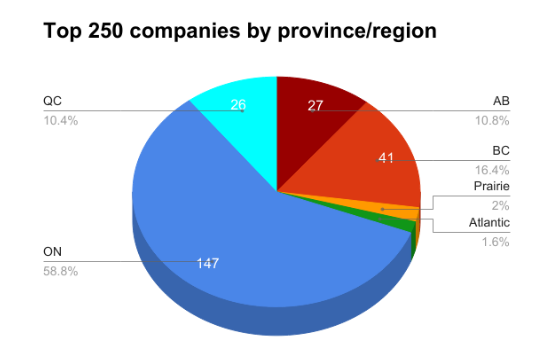 The majority of Canada’s ICT activity takes place in four provinces: Ontario, British Columbia, Alberta and Québec. These provinces represent 96% of the Top 250 ICT companies, delivering 98% of the Top 250 revenues.

And for the second consecutive year, Esri Canada was pleased to partner with Branham Group to celebrate our tech industry’s achievement. We provided expertise to create the Branham300 interactive results map and Movers and Shakers story map.

I had the opportunity to catch up with Peter Wolchak, director of Branham Group, to learn more about how they employed the interactive maps to engage the public in the Branham300.

The Branham300 interactive results map allows the public to view the headquarter locations of the top ICT companies in Canada; search them by name, rank or ownership type; and view charts with quantitative analyses of the companies. The map was built using Web AppBuilder for ArcGIS.

What were the benefits of presenting the rankings in interactive maps over a static table?

We try to emphasize that this is a national ranking. You’d think that would be easy, but most of the tech activity in Canada is in Ontario and specifically in the GTA. That's just the reality; and because of that, people in other areas may feel ignored. I believe the maps effectively show that the Top 250 companies come from across Canada.

Also, there’s a wealth of information in the Branham300 data, but it may be underutilized because lists and charts can be "unfriendly" media. The maps make the same information far more accessible and visually appealing.

Why does Branham Group partner with Esri Canada?

Internally, we are entirely behind this project because we’re always looking to use the data in new and useful ways.

Did you have any challenges with using the interactive maps?

No, we didn’t encounter any challenges with using the maps at all. The technology simply works.

Why was a story map the best way to present the Movers and Shakers?

We already present that information as a bunch of lists and it is useful, but the story map gives users more information and, as the name suggests, it tells a story that goes beyond the raw data. And the presentation style is also very engaging.

The Movers and Shakers story map leverages the Story Map Series (Side Accordion) template to showcase the top 5 companies that climbed the most spots among the top 250 Canadian ICT companies.

How did you get the data ready for the interactive map?

I adapted the spreadsheets that we use already. By adapted, I mean that I stripped out the data that is not relevant to present in the map.

The other thing I had to do this year and last was to add in address data to the spreadsheet so the companies’ locations could be mapped. We have that already for most companies, but I had to find it for others. The only challenge was the non-North American multinationals, because I often don’t understand their address conventions.

What did you enjoy the most about working with Esri Canada?

What functionality would you like to see next year?

I can’t think of anything new that is mapping related. We would love to do video interviews with selected execs and have those linked to the map, but we haven’t produced that content yet.

Building the interactive maps was easy using configurable apps in ArcGIS Online, such as Web AppBuilder for ArcGIS and Story Maps. As long as you have all the content ready, you can transform your static tables into interactive apps with these tools in no time.

Check out the Branham300 interactive results map and Movers and Shakers story map. Don’t forget to tell us what you think in the comments section below.