The GeoFoundation Exchange  is a cloud-based collaborative platform aiming to build a single, reliable and sustainable community map of Canada. The province of New Brunswick's Department of Justice and Public Safety  shares its experience of how the GFX helps them maintain a comprehensive and up-to-date road network database, the New Brunswick Road Network.

Governments across the country are working hard to build a sustainable digital economy in Canada. One of the key building blocks is a sound digital infrastructure that enables accurate, complete and up-to-date mapping of assets, such as roads, buildings, address points, parcels and other features. By empowering communities with a digital basemap infrastructure and by fostering a culture of innovation, collaboration and creativity, Canada can create more efficient systems, increase productivity, and ultimately, build smarter cities.

The GeoFoundation Exchange (GFX) is one innovative step in this direction, enabling Canadian communities to collaborate in building authoritative digital basemaps for mutual benefit in an efficient and cost-effective manner.

In the past — from the movement of indigenous peoples throughout the vast Canadian north, to the development of fur trading posts and routes, and to the establishment of the railroad that connected east with west — mapping has been integral to the development of Canada’s economy and sense of nationhood. In the 1920’s, Natural Resources Canada embarked on a program to map the entire country at a detailed scale. In the 1980’s, with the widespread adoption of computer mapping technology, these initial topographic maps were converted to a digital format. From this data came many widely used datasets such as the National Road Network, which is a freely available dataset created through the collaboration of the federal government and the provinces via the GeoBase program.

Provinces built their own digital road networks and relied on municipalities to supply them with content and updates. Municipalities, however, often worked in isolation and developed and maintained their digital data using various software, projections, schedules, standards, schemas and definitions. Each province would gather up these disparate datasets from various municipalities and standardize them in their own way for provincial use. The idea of relying on the most authoritative data sources (usually those closest to the source, the municipalities) across the country to keep the national dataset up to date, was noble. However, it was difficult to execute effectively, simply because of the hundreds of sources and their different approaches to data collection and maintenance.

The federal and all the provincial governments face these challenges daily. Recognizing the need for a single, reliable and sustainable community map of the country, Esri Canada, with the support of Natural Resources Canada, built a prototype of the GeoFoundation Exchange (GFX), which is a cloud-based collaborative platform that supports contributed data storage and exchange from multiple data sources.

Subsequently, the GFX has moved from a prototype to a production system.  It is now the source of transactional geospatial data used for building a single, national web basemap – the Community Map of Canada.  As a cloud-based collaboration platform, the GFX is accessible 24/7, thus allowing participating organizations to stay connected with any other participant in the country that shares a common interest in maintaining the same datasets. Updates are done locally but are immediately available nationally to all participants.

A province looking to maintain its own provincial roads database can view and download the deltas from a participating municipality and include those changes in their provincial database. The provincial road network, in turn, can be automatically uploaded to the GFX which other participants in the exchange, such as the federal government and municipalities, can view, download and use to update their own database. All of this can be done in near real time with the various participants communicating with each other and commenting on each other’s content for clarification and continuous improvement using a suite of GFX productivity tools. Aside from the digital hardware and software required to build such a solution, the GFX also standardizes the approach, content and schema of the contributed datasets, thus allowing the creation of a sustainable digital infrastructure. 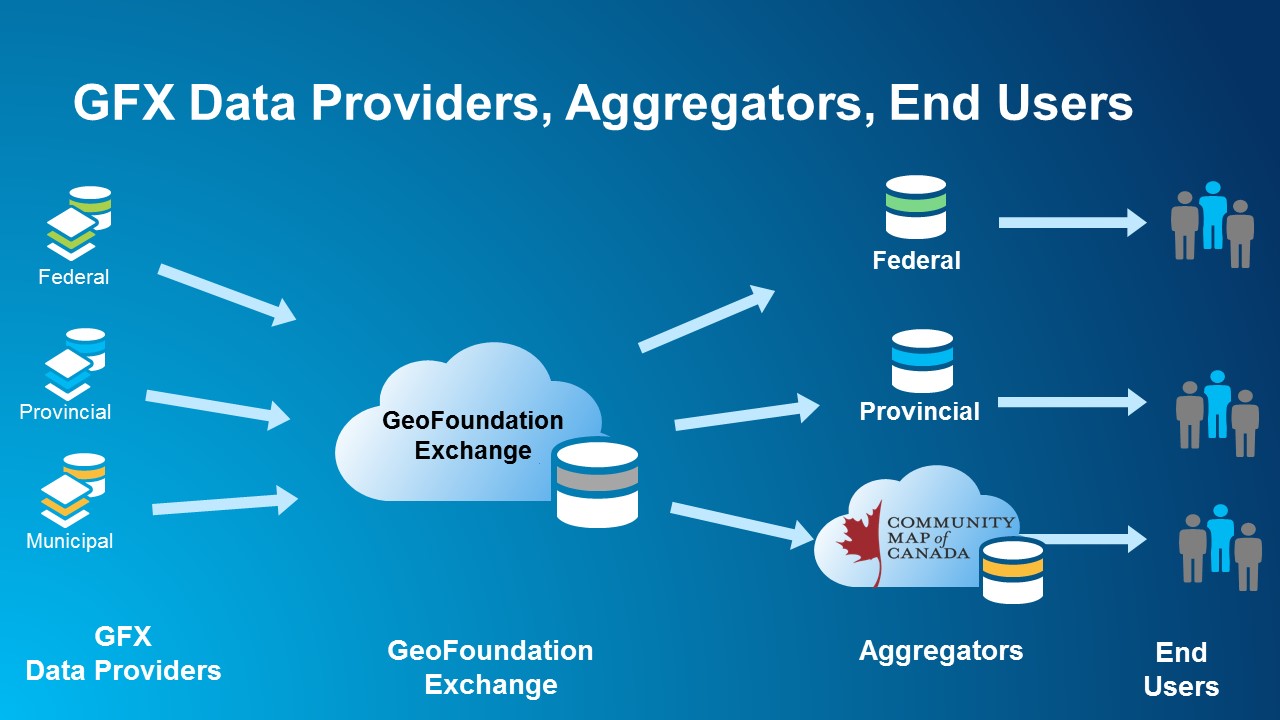 The GeoFoundation Exchange is a national open data exchange for accurate and authoritative basemap data.

The Province of New Brunswick, like other governments across the country, is responsible for building and maintaining an accurate road network database. The province’s Department of Justice and Public Safety (JPS) currently faces the need to maintain a single, comprehensive and up-to-date road network database, the New Brunswick Road Network (NBRN), to help meet the Canadian Radio-television and Telecommunications Commission’s (CRTC) requirements for Enhanced 9-1-1 (E911) services and position themselves to implement the Next Generation 9-1-1 (NG9-1-1) emergency response system.

NG9-1-1 requires accurate and reliable data on roads and address ranges so 9-1-1 dispatchers can locate and route emergency responders to correct locations efficiently. JPS and Esri Canada are enhancing JPS’s ability to keep their road and address data up-to-date by including the GFX in its workflows. JPS is contributing its road network (as open data) to the GFX for other participants to access, plus JPS shares this data with the public and other government departments through the GeoNB Portal under the province’s GeoNB Open Data License.

“All of this information and data has existed before but in different locations, and in a disparate and haphazard format,” says Robert Harris, manager of JPS’s GIS unit. “The GFX brings them all together in a consistent manner and enables us to focus only on the changes as they are published by the municipality. We don’t update once every 6 months or once every year – we update all the time.”

Several New Brunswick municipalities are also set up to contribute their data directly to the GFX.  JPS then extracts the data changes from the municipal data contributions, allowing JPS to minimize its maintenance efforts and focus only on checking and applying the changes.

Other departments in the NB government are looking to contribute to and leverage the NBRN via the GFX and the GeoNB Portal. This will bring another layer of cost savings to the provincial government. By using the same road network data, multiple departments can dispense with collecting and maintaining their own road network data to focus their efforts on other priorities.

New Brunswick’s use of the GFX to maintain its digital road network sets the pattern for using the GFX across the country and across different data layers. Municipalities can continue to do what they do – collect and update their data content – and automatically contribute that data to the GFX. The federal and provincial governments can then use the GFX as their collaboration platform to enable efficient data aggregation as well as contribute their own additional data content and updates back to the community. This additional content, in turn, can be used by the municipalities and incorporated into their operational database. With the constant back-and-forth flow of data and feedback via the GFX, the most up-to-date and complete database can be made available to all of the GFX participants and their respective end-users in near real time, as changes are made to the data.

Clearly, the Department of Justice and Public Safety’s use of the GFX to help maintain their provincial road network database demonstrates how issues such as the duplication of effort and collaboration at all levels of government, can be resolved. For years, governments have recognized the strong need to collaborate in order to maximize the efficiency of mapping at the municipal, provincial and federal levels, but such collaboration has been a challenge due to the lack of a modern, efficient and cost-effective collaboration environment. The GFX has emerged as an effective solution – a fully sustainable collaboration platform.

With the CRTC’s requirement that all jurisdictions across Canada have an NG9-1-1 system in place by 2020, nationwide collaboration on creating and maintaining an accurate, sustainable road network database for Canada needs to happen sooner rather than later.