Roads and highways connect communities; and are akin to arteries vital for survival. These are the busiest and most used assets, especially in rural areas and smaller towns that lack marine or aerial transportation options for travel and logistics.  In Canada, over the past few decades, the burden of infrastructure ownership and maintenance has been moving from senior levels of government to municipal levels, which not only calls for easy and abundant availability of advanced technology and workforce but also finance. Municipalities require funds to manage physical infrastructure in their region: buildings, parks, roads, highways, curbs, sidewalks, streetlights, poles and more. These funds are mostly sourced through federal or provincial funding such as the Municipal Asset Management Program (MAMP), or taxes from residents, businesses and property owners. In other words, our physical infrastructure directly impacts our taxes.

Faced with $76.8 million general infrastructure deficit in 2015, the City of Penticton – located in the beautiful Okanagan Valley in central-southern British Columbia – was looking for ways to deal with the increasing deficit. With a population of approximately 33,761 residents, the City manages 184 kilometres of roads and 143 kilometres of walkways and sidewalks, among other infrastructure assets. When the municipality completed its asset management audit in 2016, it realized that the aging infrastructure required more attention– the population wasn’t growing as much as the cost of maintaining infrastructure had been. In the long run, it could start impacting municipal taxes if they didn’t consider adopting a foundation for strategic asset management.

Physical infrastructure is defined by its geographical location and a mix of qualitative and quantitative data, and geographic information systems (GIS) can play a vital role in managing spatial data and producing insights that become the foundation of effective asset management. After all, effective asset management requires, first– a complete georeferenced inventory of assets to facilitate easy understanding of the ground reality; next – field data collection and inspections, followed by using automated condition assessment technologies and data management tools to prioritize Maintenance and Rehabilitation (M&R) requirements; and most importantly, a sound infrastructure management system.

In 2015, the City’s new Electrical Utility Manager championed their department’s transition from CAD data and paper-based processes to a consolidated, centralized SDE database in the City’s ArcGIS Enterprise system. Using Schneider Electric’s ArcFM solution with the assistance of Harterra Spatial Solutions, the results were impressive.

“The ROI from consolidating data and building processes into ArcGIS to manage the electrical assets with the Esri tools was seen very quickly,” recalls Dave Polvere, IT manager for the City of Penticton. “The momentum built up from the successful electrical project aligned with Penticton’s asset management planning, which quickly led to the migration of the City’s water, storm water and sanitary sewer data into the enterprise geodatabase. Roads data was next on the list.” 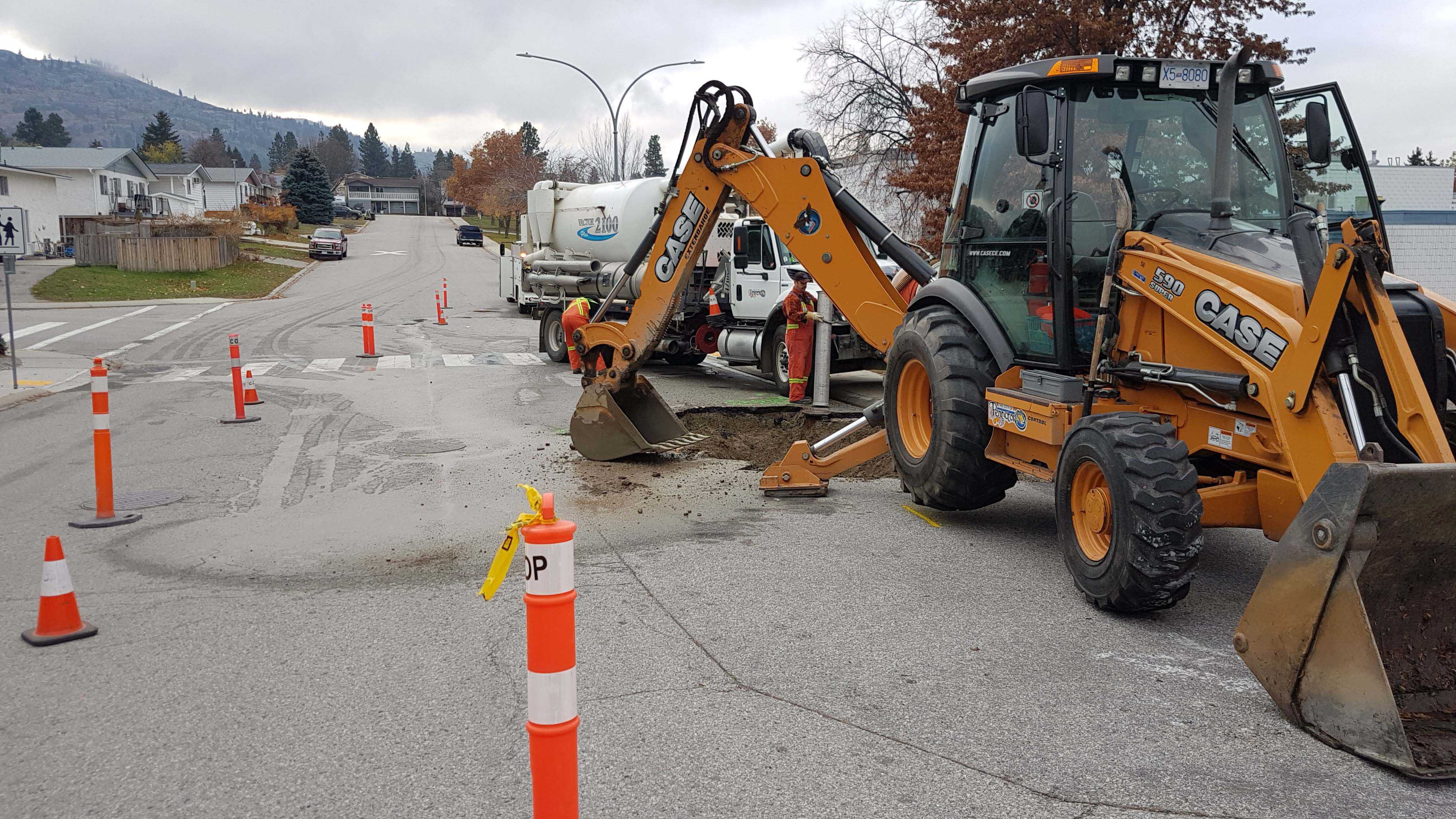 What makes Esri technology more effective when it comes to managing roads and highways?

Esri Roads and Highways is based on an advanced linear referencing system (ALRS) method, which uses positions and locations to reference assets along a route. Locations are relative to the length of the route and may change positionally when the route changes, whereas positions are discrete points on the ground and have no direct relationship to a route. This innovative and highly efficient solution allows government departments to integrate data from multiple linear referencing system networks to get a comprehensive view of their roadways. 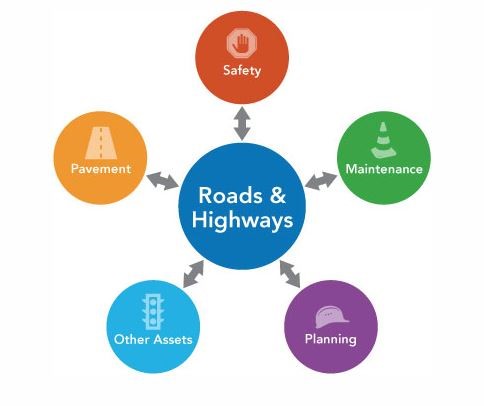 The ease of visualizing and maintaining road networks, creating transparency and eliminating silos go a long way in optimizing available assets in any community – something that the City of Penticton wanted to achieve for effective asset management.

“After reviewing the different approaches for managing road information, we found that Esri’s Roads and Highways, based on Web GIS, is able to record information at a finer level of detail without the need for complex editing of geometries. Its simpler and streamlined data maintenance processes suited to road information were also very helpful,” Polvere explains. “This is the only solution we found that could optimize asset management for our city. We worked really hard and now we have laid a really good foundation for future asset management.” 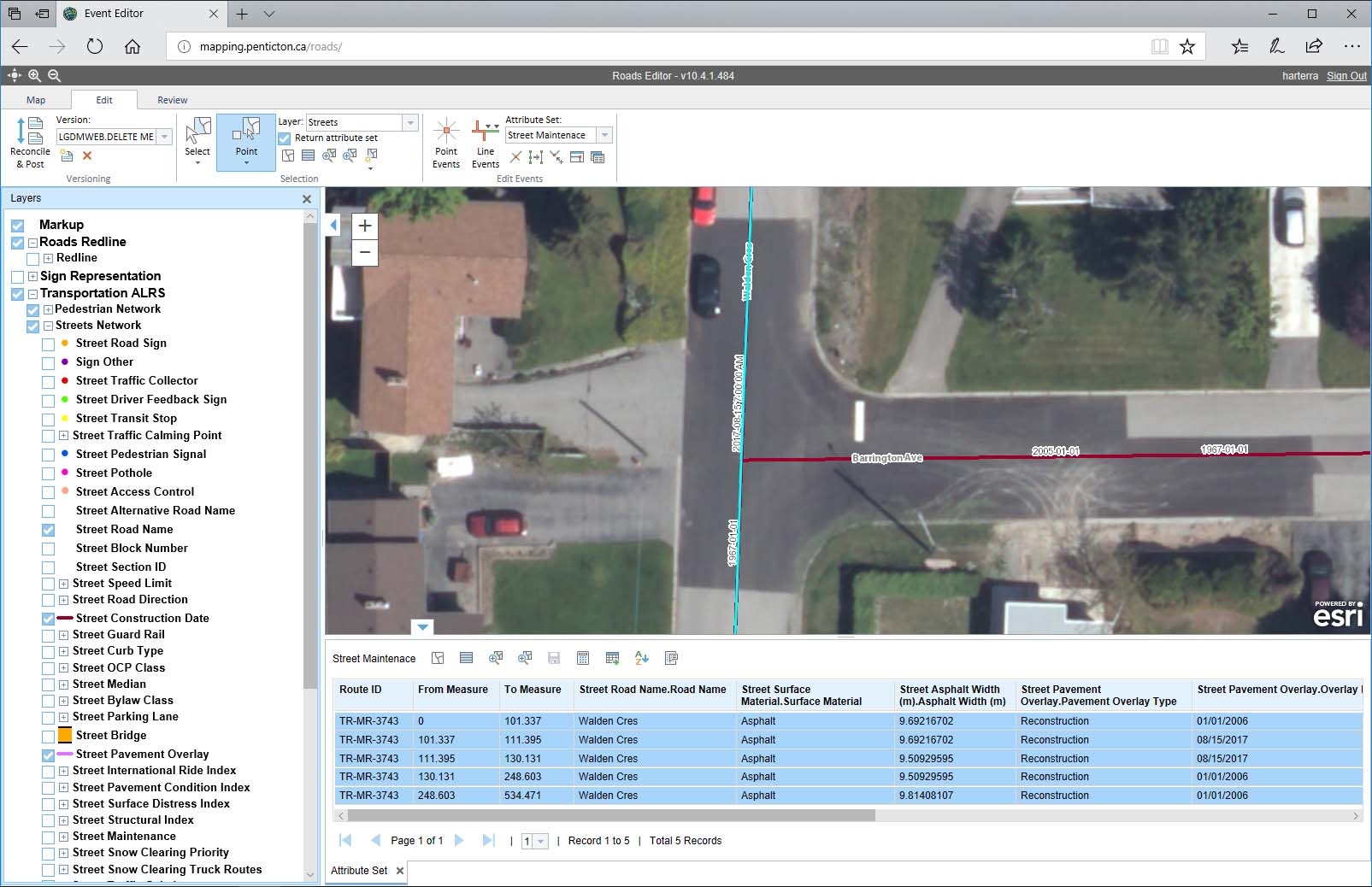 Compared to a traditional intersection-to-intersection model, the Roads and Highways ALRS can accurately represent the details of any construction.

Tyler Figgitt is the design supervisor with the department of Engineering for Capital Works at the City and has been a part of the project from its very beginning. He is happy with the many benefits that the Roads and Highways solution affords: one single centreline accommodates multiple and disparate sets of data; a centralized repository allows everyone easy access to details that matter; Esri’s inclusive technology, with its web-based, user-friendly interface, makes it easier for the team to edit data in real time.

“There are more than 80 layers of datasets on most of the City’s roads or highways such as surface material, attribution, width, repair history, speed limit, direction and so on. Not only is it cumbersome to organize the information from each of these layers separately, but it also impacts intelligent decision-making. By organizing all these layers on one centreline, our GIS team is able to produce more accurate reports,” Figgitt points out.

Using the web-based Event Editor, users specify the start, end and attribute details for a specific section of a road or sidewalk. This simple and intuitive process eliminated the step to create, subdivide or manipulate the centreline geometry.  Roads and Highways handles segmentation – merging coincident information and removing overlapping attributes that may otherwise duplicate.

After the initial scope of the project was fulfilled, it became apparent that the ALRS provided through Esri Roads and Highways had some clear advantages over the traditional intersection-to-intersection segmented road model used by other municipalities. The City decided to establish a second ALRS to manage the complex attribution information of sidewalks, pathways and trails. Now, Penticton has a connected pedestrian network that allows the GIS team to perform advanced reporting and analysis of pedestrian assets.

It didn’t take long for the team to determine that state-of-the-art GIS technology was the answer to many of their challenges. They then created a five-year GIS strategy and got the City’s buy-in to implement it. One of the critical aspects of this strategy was implementing Esri Roads and Highways' desktop and server tools for Penticton’s land route network.

To assist with accelerating projects, the City leveraged Esri technology to manage its assets and also roped in HARTerra Spatial Solutions, a company based in West Kootenays in Castlegar, to support successful implementations and ongoing use of GIS.

HARTerra developed the data models, configured and customized the application to meet the needs of the City, migrated existing data into the ALRS and trained City staff on web editing and desktop workflows.  This led to the development of tools that leverage Roads and Highways web services for extracting data to support the City’s asset management planning processes.

Jason Hart, founder of HARTerra, says, “Our goal is to help organizations understand how to implement GIS and to support them on their path to making geospatial data and technologies a key part of their operations. With our experience in using Esri tools for infrastructure, utility and government projects, we know how important ArcGIS Enterprise is as a platform for the City of Penticton and for all our clients.”

A key goal of the City is to make all geospatial data managed in the enterprise GIS database accessible to all users. Moving forward, part of Penticton’s strategic plan is to enable direct updates of field inspection information into the Roads and Highways geodatabase and continue building upon its Roads and Highways solution to meet the City’s needs for information management. The City also wants to better understand spatial relationships to improve analytics, and be able to weigh expansion or improvement options for more cost-effective asset management.

Bus routes and related transit information is managed in Roads and Highways as linear events along a common road centreline. Bus stops are managed as point events along the routes and represent the actual location as shown to users.

By laying a sound foundation for connecting and managing transportation assets, the City of Penticton is ready to engage city staff and the public with a multi-modal transportation system that incorporates different types of transportation modes (such as walking, sharing a bike, riding a train or driving a car) into city planning. By making data open and transparent, it’s breaking barriers and inter-organizational silos, and encouraging city-wide consumption of data and participation in data management. It’s getting ready for the future, a smart future.

This article originally appeared in the Spring 2018 issue of ArcNorth News.