Like many Canadians, I like to watch Hockey Night in Canada every week, which is where I got the idea of applying GIS to analyze hockey. In the months that followed, not only did I apply spatial analysis to hockey games, but I also submitted this analysis to apply for the Esri Canada Higher Education GIS Scholarship at Brock University.  Find out what made this a winning project.

November 14 is GIS Day, celebrated by geographers, cartographers and GIS users everywhere. At Brock University, GIS students celebrate with a project competition sponsored by Esri Canada. The winner receives an Esri Canada Higher Education GIS Scholarship, which includes funding, software, training and networking opportunities to help students continue to develop their GIS skills and interests. I decided to work on a project applying GIS analysis to hockey games and submit it for the competition.

As Canadians, we all know what hockey means to us: passion, athleticism, power and toughness––a hockey player is as Canadian as the maple syrup. For many people, myself included, the game of hockey doesn’t mean advanced regression models and mathematical formulas. However, this changed for me when I realized there was an opportunity to apply the power of GIS and Esri’s spatial analysis tools to analyze hockey.

Every hockey team wants to understand how they can score more goals than their opponent and win more hockey games. If you are a hockey player, you’d more than likely agree this has as much to do with location on the ice during a game as an individual player’s talent. As a young hockey player, I was constantly taught where to skate to, where to shoot from and where to defend from. That’s applying the science of where to hockey!

Locational understanding on the hockey rink is clearly evident. So, I formulated the basic question for applying spatial analysis to player and team performance: what datasets are needed and can be analyzed to help hockey teams increase their goal-scoring and ultimately improve their chances of winning a match?

To expand on this, three questions came to mind:
a) What kind of data would be easiest to collect and yield the best quality result? (Shot locations, player locations, puck location, etc.)
b) How could I define areas on the ice that are associated with higher likelihoods of scoring?
c) How can the fast and fluid game of hockey be analyzed using hard-defined areas?

Armed with these questions, I approached the Brampton Beast professional hockey team’s manager of hockey operations, who showed great interest in my project and agreed to collaborate with me. Together, we set out to study the location where shots were taken on the ice to conduct statistical analysis. The report I created were not only easy to read and understand, but also provided meaningful insight into the team’s games.

Using data collected from the East Coast Hockey League (ECHL) online game centre , I digitized 705 points representing the location of shots for and against Brampton during 10 of their games. I relied on ArcGIS ModelBuilder to create a repeatable workflow for querying and analyzing the data. This allowed for reports to be created with ease, as the model pulled data that matched certain criteria and then performed analyses, such as kernel density, to highlight hot spots in shot-activity on the ice. I created several reports that were based on individual player performance, single games, certain opposing goalies and comparison charts of games won versus games lost.

The team’s staff used these reports to gain a better understanding of the strengths and weaknesses of their strategy and to adjust their game-day strategy accordingly. Such reports can enhance coaching practices with data-driven and evidence-based strategies. Especially knowing how fast-moving and fluid hockey is––for example, while nobody can tell Sidney Crosby the exact coordinates of where he should shoot from, if you give him a map showing that he scores more often from the middle section of the ice than anywhere else, then he’ll be out there in the next shift doing just that. Using these reports to interact with players can help them better understand their statistics and the analysis of their play––looking at a cool map is a lot easier to understand than numbers on a spreadsheet. 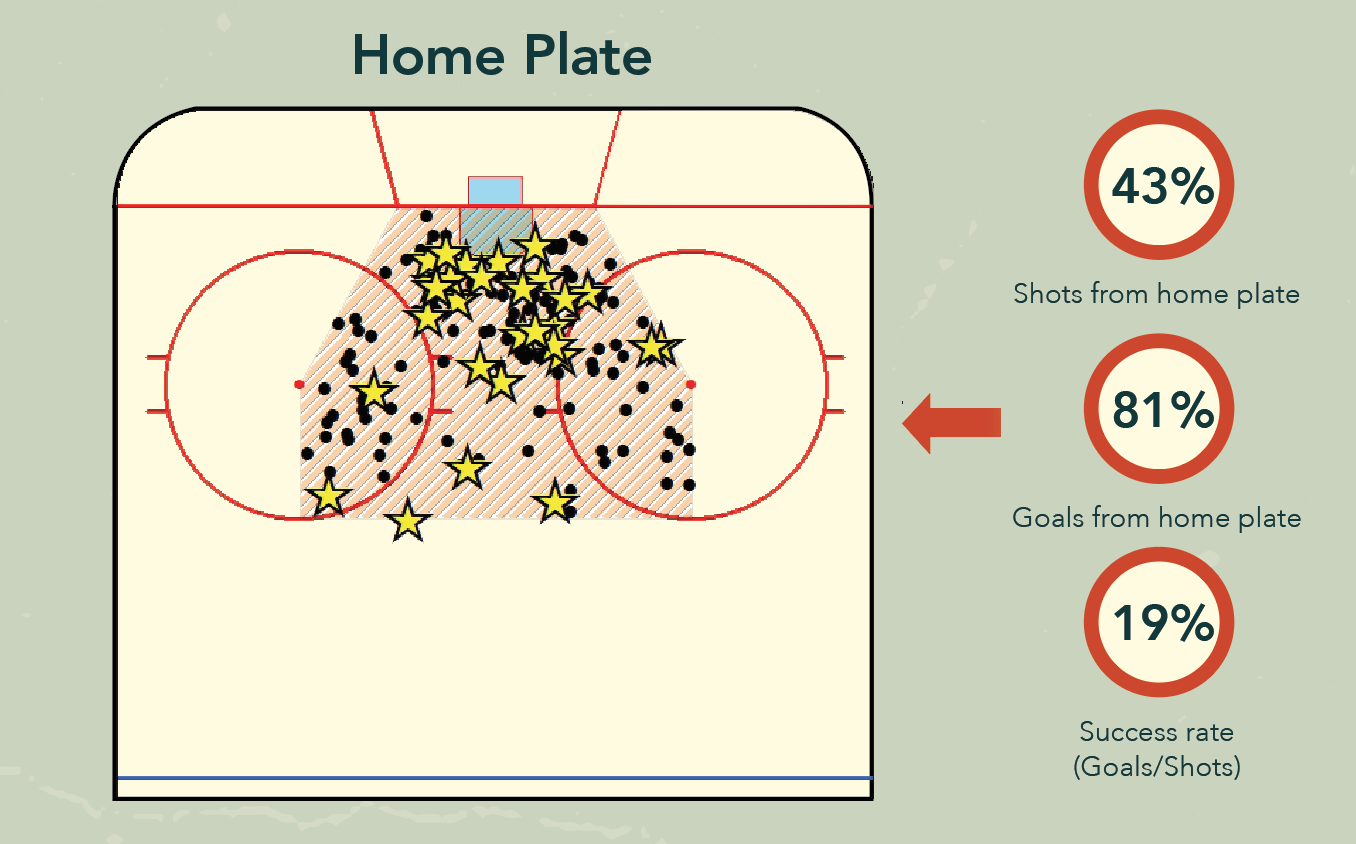 The home plate is right at the centre of the ice in the attacking zone, where most goals and high-quality scoring opportunities occur. Shots from the home plate are more likely to result in goals, which implies that if teams focus on shooting from here, they are more likely to win. The Beast’s staff identified this as a significant revelation––they decided to concentrate on making offense from the home plate, while also channelling their defensive strategies on preventing opponent shots within this area inside the blue line. 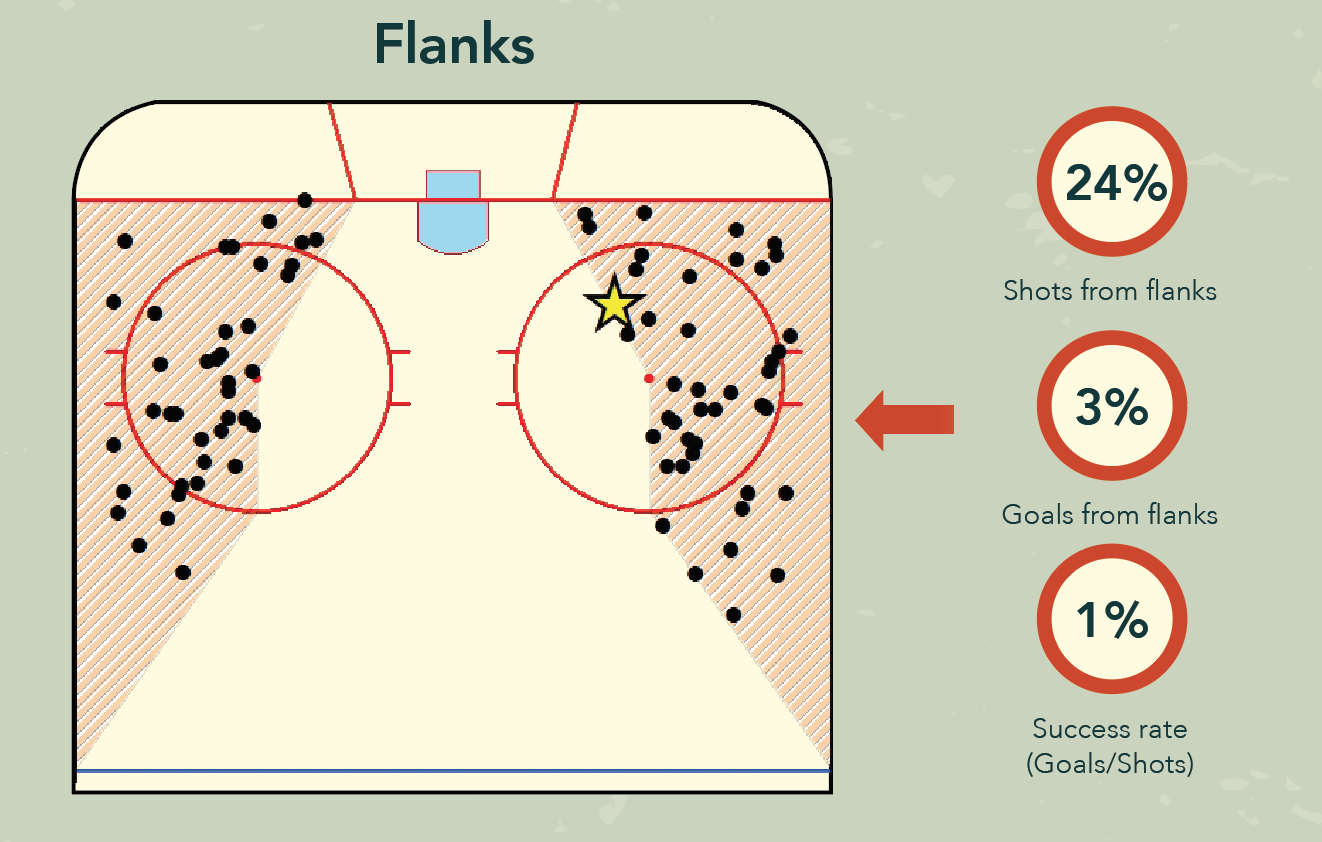 Located along the sides of the rink, the flanks are on the periphery of the action area. Not only do the flanks offer lower possibilities of scoring but also rather lower-quality shots. The Beast’s manager planned a new strategy–– to force the team’s opponents during a game to shoot from the flanks while themselves attempting to break out of here into home plate to increase their own scoring chances. 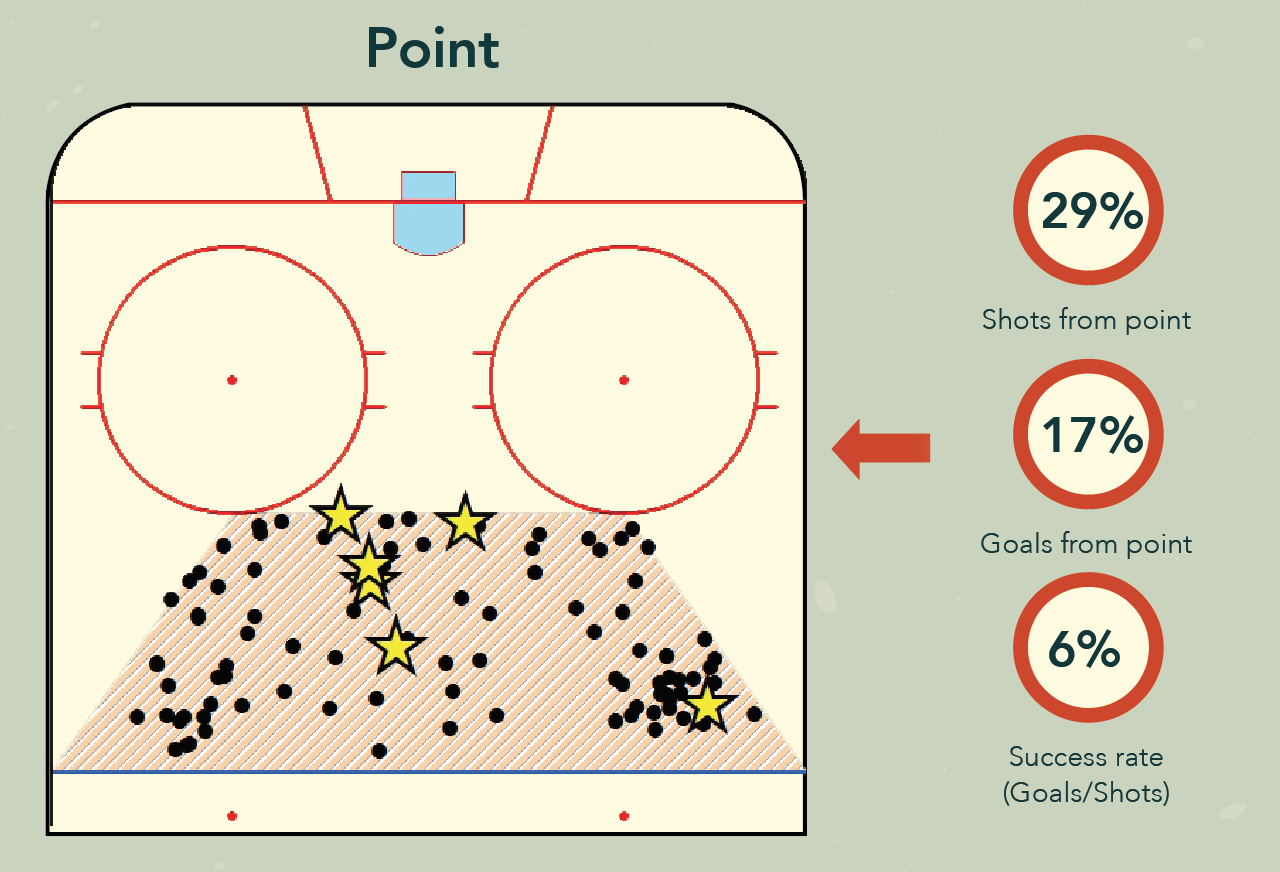 As the area farthest away from the net, and the domain of the defenceman, the point allows for long-distance shots and offers more time to the goalies to react to the shot. However, players here often have more time to set up their shots due to decreased defensive presence. Further, the longer distance allows for more traffic to affect the shot––players flooding the middle to protect and to score can block the goalie’s vision and prevent them from reacting in time to stop the puck. 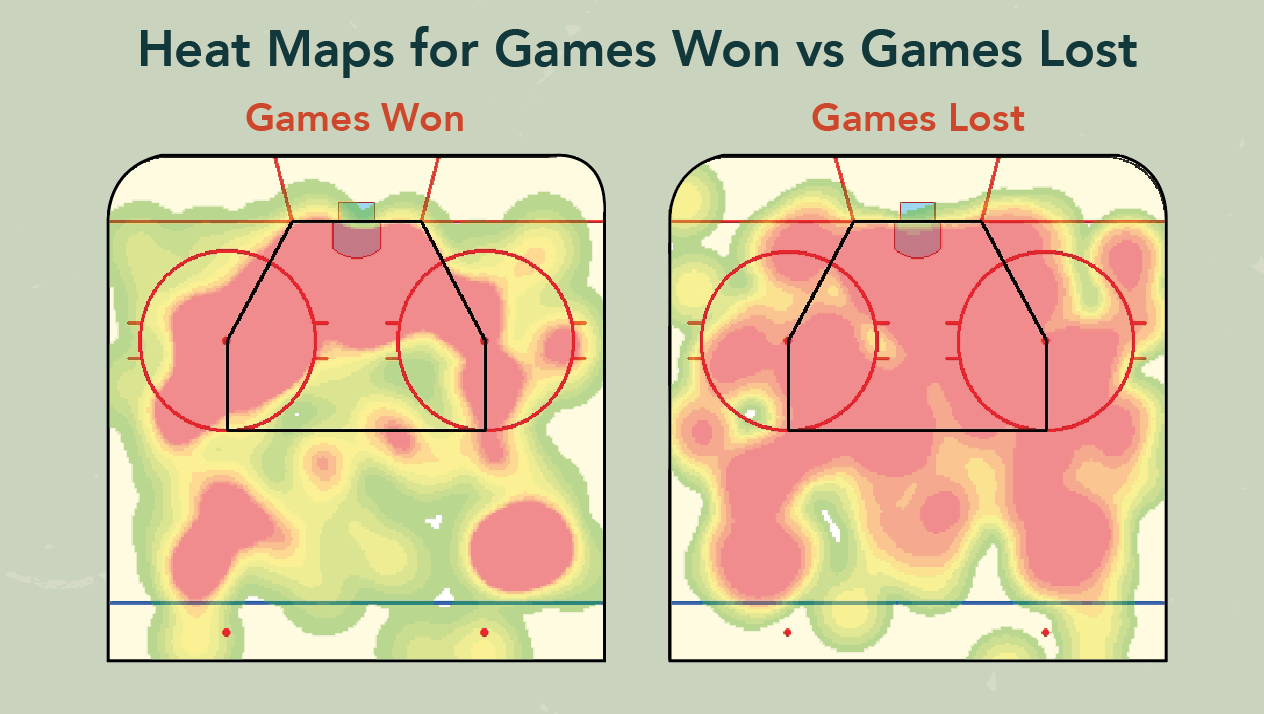 The hot spots in these maps represent the occurrence of shots taken. If we examine the more concentrated areas of “red” that represent where most shots were taken, we can identify the opportunity scoring area of the home plate. In this example, you can see losing games have a much less concentrated spread whereas in the winning games, the red areas are much more prevalent in and around the home plate scoring area. 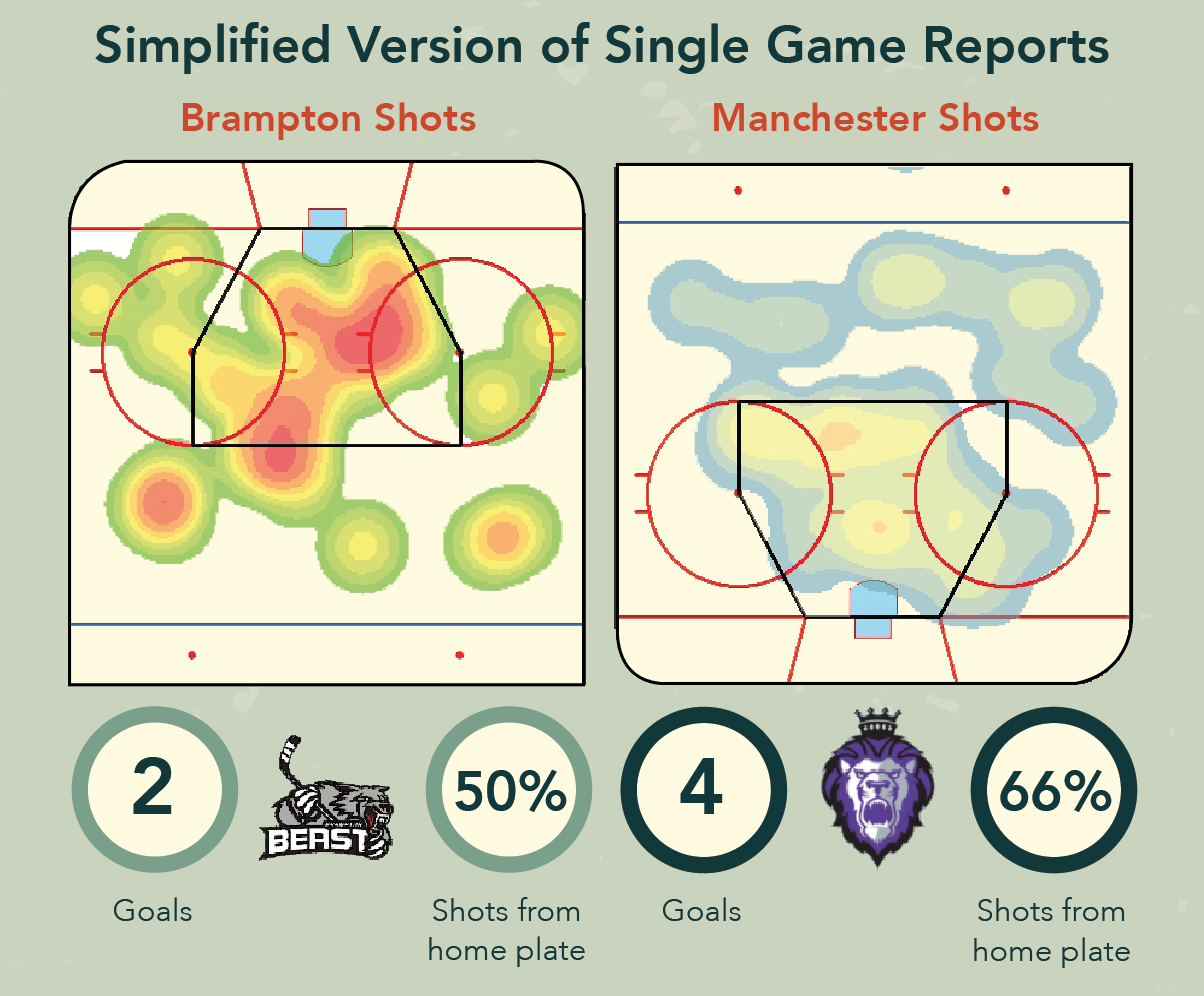 A simplified version of the single-game reports: Here we can see keys to the game based on where shots were taken. Brampton only took 50 percent of their shots from home plate and scored 2 goals. Manchester doubled their goal production with only a 16 percent increase in home plate shots––the area is that important! We can see Brampton defended this game poorly, failing to force Manchester to shoot from the low-scoring areas of the flanks; their density map is much more focused inside the home plate area. 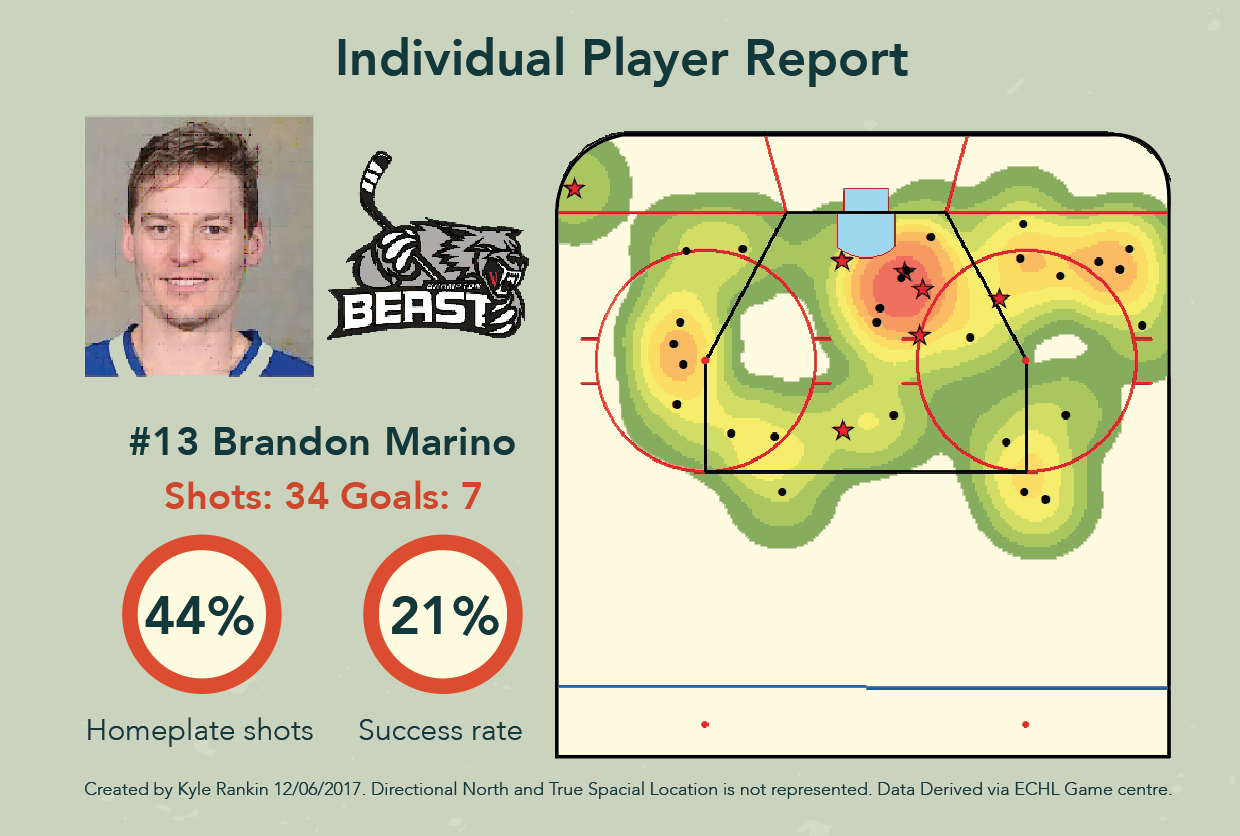 An individual player report: The analysis in this map shows where Brandon Marino took his shots and where he scored from. Notice how most of his shots were concentrated in the home plate area––it’s no surprise he led the team in goals for this sample of games. This information could be used to develop his future shots strategy.

After graduating from Brock University, I entered the Associate Program at Esri Canada where I’m discovering a variety of different GIS tools, programs and applications. As I’m learning more, I’m also noticing a lot of potential in the continued development of location intelligence in sports. While professional teams in leagues such as the NBA or NHL have dedicated analytics staff who collect game data from multiple sources and analyze it at an advanced level, non-professional teams have no reason not to explore new ways of collecting and analyzing their team’s game-day data. Similar initiatives can be taken in other ways. At the pro-level, microchip-embedded jerseys were tested at the Olympics to track players on the ice, and with Esri’s newly announced Location Tracking for ArcGIS app (early adoption stage), player-tracking can integrate seamlessly with the current software environment.

There are endless possibilities for using spatial analysis in the data-rich sports industry. GIS can pull location data from sports fields and rinks and turn it into actionable insights. I wouldn’t be surprised to see Toronto Maple Leafs General Manager Kyle Dubas monitoring and analyzing the puck and players’ data during a game on an Insights for ArcGIS dashboard. But whether it’s Kyle Dubas showing Auston Matthews where he scores his goals from or the next young prodigy at the local rink, spatial analytics in sports can be a powerful tool, not only to enhance the understanding of in-game performances but as a way to inspire young athletes to think spatially on and off the ice.

Hockey analytics isn’t the only way GIS can be applied to ice. RinkWatch, a citizen science initiative from Wilfrid Laurier University that recently partnered with the NHL, is working with outdoor ice rink enthusiasts across North America and even globally to help monitor winter weather conditions and study the long-term impacts of climate change. By asking participants to submit information about skating conditions via a custom Esri web app, RinkWatch is able to provide data on freeze and thaw locations and times throughout the year and make forecasts of future outdoor skating conditions on their backyard rink. Changes in the length of time that a backyard hockey rink is playable provides important information on their recreational activity as well as crowd-sourced reports on changes in temperature levels.

This article originally appeared in the Fall 2018 issue of ArcNorth News.