Steve Buist is the Investigations Editor for The Hamilton Spectator, but because his university degree is in human biology, Buist says he approaches stories “like a scientist”.  Many reporters go through the facts looking for what they think is the story. Buist says he would rather “collect the information and analyze it”. Self-described as the science guy at the paper, he says “when they need someone to figure out the percentages of something, they usually ask me”.

In a room full of word and pictures people, he is happiest working with numbers. He wasn’t surprised when his editors asked him to write a story that involved environmental testing. That was 2006.

The editors wanted a health story on soil, water and air testing using facts that tell their own story about health risks. Buist told them that would take a lot of time and money, so instead suggested that – like scientists – they reverse the perspective and look from the bottom up. Rather than examining specific environmental factors known to affect health, he offered to “look at how people’s health is affected by their neighbourhoods”. What Buist was suggesting was looking at the relationship between social factors and people’s health might tell an important story. His editors agreed. This location-based health story proved so revealing that it became the biggest journalistic project of Steve Buist’s career.

‘Code Red’, Buist’s story, had a big effect on more than Buist. By providing data for government and agencies on the problems of poverty and health, his story “mobilized agencies to help people in need and became a key issue in the municipal election. The series has received international attention and has been integrated into the curriculum of a number of university courses” – as stated in his nomination for the prestigious Michener award, which celebrates professional journalism that generates an impact on the public and an arms-length public benefit.

How did he do it? It wasn’t easy, but the good stories never are.

First, he had to find data on the social factors that affect health.  This proved to be very difficult. Various organizations rejected his request, citing the privacy of medical information.

During one of his visits to McMaster University, someone suggested he talk to Neil Johnston, because he is also interested in health data. It was good advice, and when Buist met Johnston it was a professional match that has lasted a decade.

Neil Johnston is an epidemiologist. While at McMaster, he founded The Ontario Physician Human Resources Data Centre, a collaborative project of the College of Physicians and Surgeons of Ontario, the Ontario Ministry of Health and Long-Term Care, the Ontario Medical Association and the Council of Ontario Faculties of Medicine. It is the definitive source of information on physicians in practice and postgraduate medical training in Ontario. Neil Johnston could access the data that would become Buist’s award-winning story.

Johnston took Buist to meet the resident GIS expert at McMaster, Patrick DeLuca. DeLuca, now co-director of the Esri Canada GIS Centre of Excellence at McMaster, teaches GIS to students from a variety of disciplines, so he is comfortable working with people who don’t have a GIS background. When he heard about Buist’s project, he knew it was a great opportunity. He not only offered to help him, but his expertise would be free. “I’m a life-long Hamiltonian,” says DeLuca, “and I wanted to give back to my community”. DeLuca’s expertise with both geospatial and statistical analysis was the perfect mix for a location-based story like ‘Code Red’.

Buist used health service, education records and socio-economic data from various Hamilton neighbourhoods to create a profile of factors that affected people’s health. It took months to collect all the information. Even then, the statistics – based on 140 census tracts – were difficult to interpret. Buist says, “the results were striking”, but those results were not obvious to the average reader. He turned to DeLuca.

They both knew the impact of the information had to be mapped to be understood effectively, but it was difficult initially to visualize a meaningful pattern. DeLuca suggested displaying the data using quintile maps would make them much easier to understand and read. The quintile maps were created by sorting the census tracts by a given value from lowest to highest, then grouping them into 20% quantiles, or five groups of 28 census tracts. The first quintile represents the lowest fifth of all 140 census tracts, while the last quintile represents the highest fifth. Then they coloured the census tracts on the map based on these quintiles: green for positive and red for negative values. This revealed what Buist calls “the donut effect”.

The more affluent suburbs of Hamilton, where people don’t need to access health care as often was green, and the lower, inner neighbourhoods where poorer people live and go to the emergency rooms and clinics more frequently, was red. It was very clear, and the cutline under the title ‘Code Red’ was created: ‘Where you live affects your health’. As Buist puts it, “the wealthier you are, the healthier you are”. 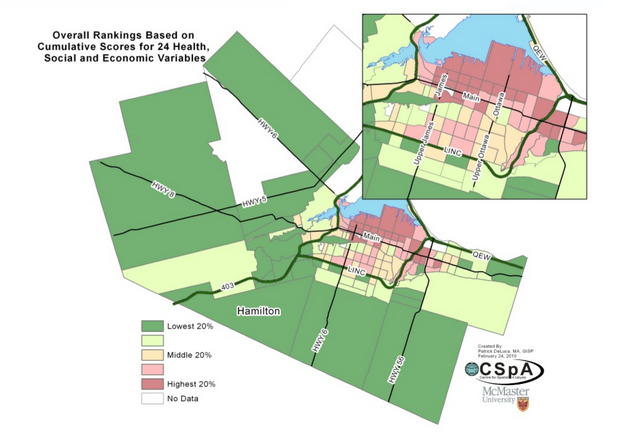 Code Red mapped the overall ranking of Hamilton neighbourhoods based on cumulative scores for 24 health, social and economic variables. 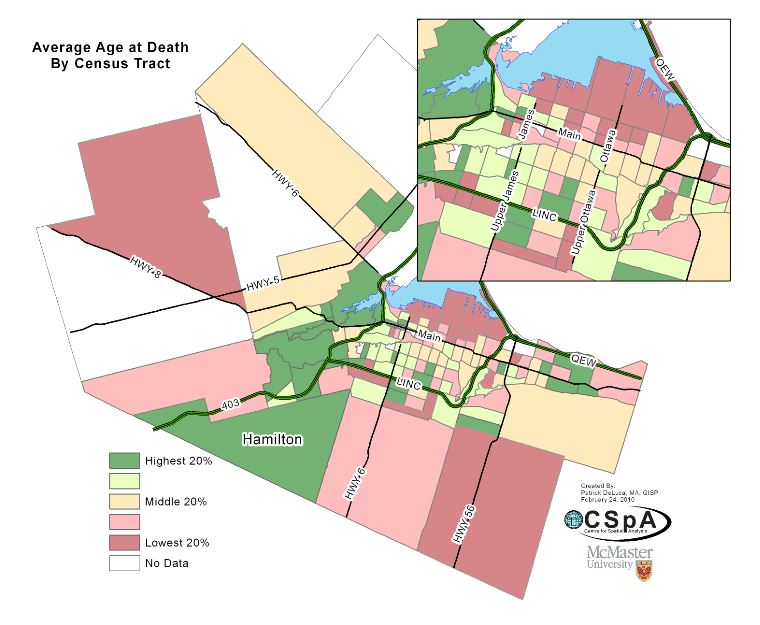 This groundbreaking health mapping project uncovered glaring disparities among Hamilton’s neighbourhoods. This map shows a 21-year difference in average life expectancy between the wealthiest neighbourhood and the poorest neighbourhood.

It took almost three years but when The Hamilton Spectator published the ‘Code Red’ series in 2010, over seven days, it changed the conversation about health care. It won a National Newspaper Award and was shortlisted for the Michener prize. Johnston and Buist won the 2011 Hillman Prize for journalism fostering social and economic justice. Buist has been honoured with both national and provincial journalist of the year awards more than once. It also spawned two articles in academic journals with DeLuca as the lead author.

Why was this series a game changer?

Because it integrated a lot of social factors into health care. Presenting that integration in a map made the results very stark and very clear: poverty determined people’s health. There were calls for an update and they produced one in 2019. It made for a perfect way to compare how things had changed, or not. And the circumstances affecting people’s health haven’t changed a lot.

‘Code Red’ became a brand for The Hamilton Spectator. After the first story, Buist, Johnston and DeLuca did another one on mothers and babies called ‘Born’, and then they took on cancer rates with ‘The Cancer Project’, which showed that your chances of dying of cancer vary depending on where you live in Hamilton.

There were other stories, unrelated to health. One story looked at a street which used to be an engine in the Hamilton economy, and they documented how it changed during a 60-year period. By monitoring the changes on that street – which stores opened and which closed – a narrative was suggested which reflected the larger story of Hamilton’s economic troubles.

Buist says he wants people to understand their city at a “micro-geographic level and see that it’s not all a homogeneity” as is often suggested about cities.  And he says, “the story map is a pretty straightforward way to tell a story”.

DeLuca did most of the mapping for his stories and Buist said once he really understood the storytelling component, he decided to learn this for himself. He wanted to lessen the load on DeLuca, but he also thinks better visual storytelling is the future for the print media.

“As an industry [newspapers] struggle with the online part” says Buist. “Making the story more engaging for the reader means they will stay longer on your site and really see the story in a different way.”

For Steve Buist, a story map made his talents really shine.