Throughout its 101-year history, Prince George (originally called Fort George) has been called many things: a trading post, railway boom town, mill town, staging centre for mining and prospecting, home of the British Columbia Northern Exhibition (BCNE), home of the University of Northern British Columbia, host of the 2015 Canada Winter Games, “Northern Capital” of B.C. — the list goes on.

The City is currently hard at work to earn its next title: smart community. 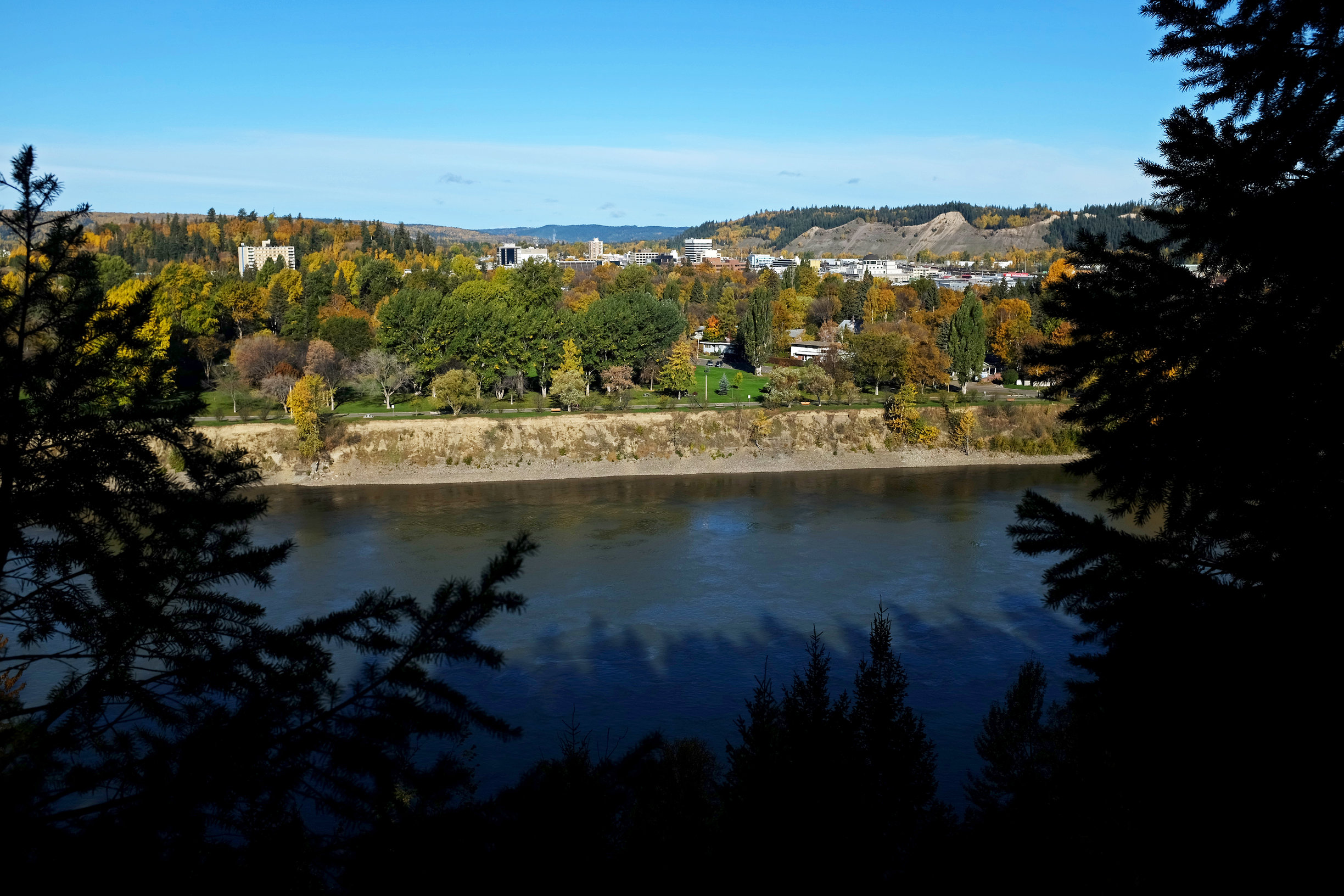 A view of Prince George from outside the city.

Located at the confluence of the Fraser and Nechako Rivers, Prince George is home to approximately 80,000 people, making it a medium-sized Canadian municipality. However, there’s nothing ‘medium-sized’ about the infrastructure that the City has to maintain every day. It owns and operates 50 civic buildings, 1,500 lane-kms of paved roads, 19 km2 of parks, 7 wells, 15 reservoirs, 41 pumping stations, 560 km of water distribution mains, a Class 4 wastewater treatment centre, 5 treatment lagoons, 454 km of sewer collection mains and many other capital assets.

To better address its infrastructure challenges, the City has been building up its asset management (AM) capabilities for more than a decade. Important milestones in this ongoing effort include an assessment of the City’s asset management practices in 2004, the hiring of a full-time Assets Manager in 2007, the implementation of RIVA capital planning software in 2009, the development of a business blueprint for a GIS-centric computerized maintenance management system (CMMS) by Esri Canada in 2011 and the approval of an official asset management policy by City Council in 2012.

By 2013, the City was ready to adopt a CMMS to help manage its capital assets. After considering several different asset management solutions, it chose Cityworks by Azteca Systems.

“Unlike other CMMS, Cityworks provides GIS functionality to map the location of assets, store and manage all information such as purchase date and lifecycle associated with each asset, and analyze its connection to other assets,” said Kristy Brown, asset manager for the City of Prince George. “It allows us to optimize each asset and prioritize and complete maintenance and repairs cost-effectively.”

Working with Esri Canada, the City of Prince George integrated Cityworks with its existing systems, making the CMMS an asset management hub for service requests, work orders and inspections.

The Public Works Department went live with Cityworks in June 2014. Since then, the City has been enhancing the system, adding new training modules, processes and templates. Prince George currently has 145 Cityworks users in its Parks, Roads, Utilities (water, sanitary and storm) and Engineering departments, as well as in its Service Centre.

Reviewing its performance in 2014, the City generated a report listing the most used service request templates and discovered that utility locate requests topped the list by a large margin. Utility locate requests are emailed to the City by BC One Call, the province’s central contact point for contractors and homeowners needing information about buried utilities infrastructure.

Recognizing an opportunity to streamline the process, the City worked with BC One Call to develop a Cityworks integration that automatically converts utility locate requests into Cityworks service requests, bypassing the Service Centre, giving them more time to focus on other important customer requests. Now, incoming requests are routed directly to the City’s underground Locators, who are able to quickly look up the required information and forward it to the interested party.

Cityworks in the Field

After the City completed the initial Cityworks deployment, it wanted to extend its new asset management tools into the field. The question was, how to do it?

Cityworks has several mobile offerings: Cityworks Field Mode, Cityworks Native App and Cityworks Mobile Web. There were also a number of third-party apps to consider. The City even looked at externalizing Cityworks through its VMWare.

In choosing a mobile app, the City’s guiding principle was to simplify the end-user’s experience as much as possible while still providing an interface that matched its business processes. 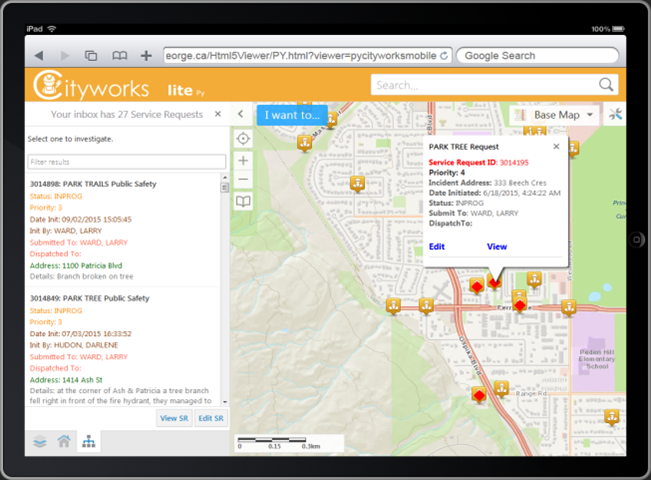 Prince George’s mobile app showing a list of Service Requests (left) and their locations on a map (right).

“Some of the one-size-fits-all applications can be complicated for the user—they have everything but the kitchen sink,” said Geoff Mulligan, one of the City’s GIS Analysts. “We wanted to ensure that the mobile app would take the user through our specific workflows.”

The City weighed its options and decided to develop its own mobile app using Geocortex Essentials and the Cityworks extension for Geocortex. This seemed like the best solution because it allowed the City to deploy its unique workflows with integrated web mapping features.

To prove the concept, the City initiated a pilot project for service requests. After studying its existing processes, the City developed a prototype app that used Cityworks’ Service Request API. It then tested the app in conjunction with a representative user group, who helped refine it into a finished product. Motivated by the success of the service request tool, the City quickly added work orders and inspections to the mobile app.

The Benefits of Working Smarter

A big part of working smarter is being able to measure operational efficiency. Using Cityworks, City administrators are better equipped to track key performance metrics and identify asset management processes that can be improved, such as utility locates.

“Integrating utility locates into Cityworks has freed up approximately 225 person-hours per year at the City’s Service Centre. That’s more than a month’s worth of time that can now be spent on other projects and customer requests,” noted Brown.

Thanks to the new mobile app, underground locators and other field workers no longer have to travel back to the office multiple times each day to take on new jobs, retrieve information or deliver status reports. One worker has calculated that the app is saving him 15 kms of driving per day. Needless to say, the City is pleased with the increased productivity (and reduced vehicle usage) that comes from real-time information sharing. 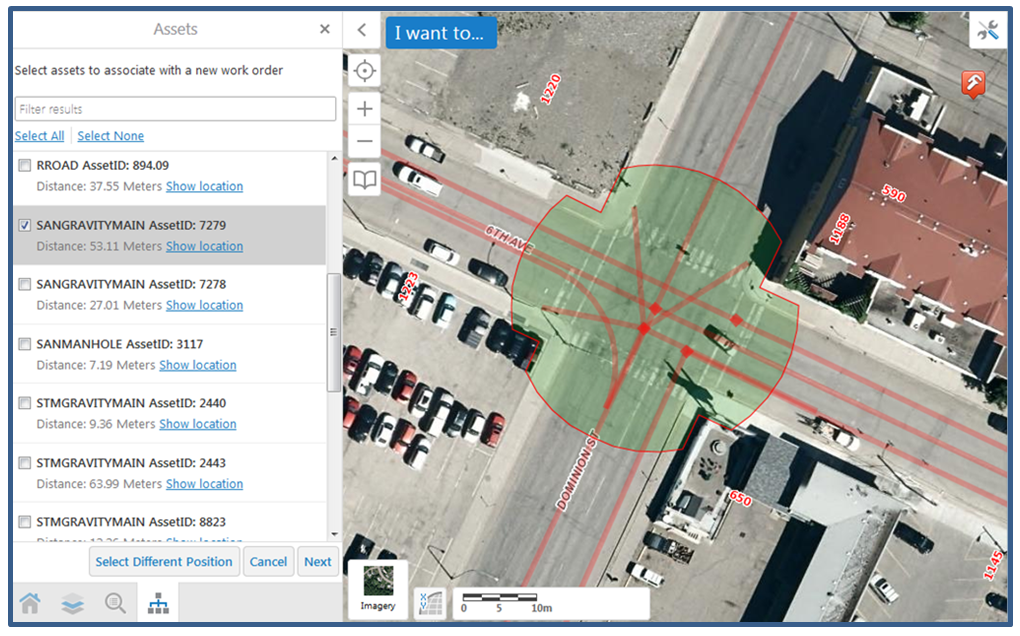 Prince George’s mobile app showing a list of nearby assets (left) and their locations on a satellite view of the area (right).

With several asset management wins under its belt, the City continues to move ahead with the five-year road map developed for it by Esri Canada last year. Right now, the City is laying the groundwork for Asset Manager, an Esri Canada Cityworks extension for managing assets within utility and civic facilities.

In the coming years, the City plans to implement a number of Cityworks interfaces for CCTV sewer pipe inspections, pavement management, RIVA infrastructure software, SCADA equipment monitoring and automated vehicle location (AVL). Also on the horizon is a public-facing service request portal for the City’s website.

Prince George is well on its way to earning the title ‘smart community’. With some help from Cityworks and Esri Canada, the City is well-positioned to write the next chapter in its history.