Giving its stakeholders a way to participate proactively in maintaining shared assets in their community can go a long way in enhancing asset life. Ville de Lévis used ArcGIS technology to initiate a collaborative pothole-reporting tool.

Since ancient times, people built assets meant for common use and maintained them collectively. According to historical archives, the ‘law of commons’ or ‘common goods’ was practised for the upkeep of public assets such as roads, parks, water bodies, courts, museums or monuments. 'Commons' popularly referred to common land that was available to the public. As civilizations evolved, migration of people increased, and sense of ownership towards common goods dwindled. The concept of governance and taxation emerged, where the public pays taxes and elects a government to manage common goods.

Today, the law of commons is making a comeback as economists see value in letting the public or users participate proactively in maintaining shared resources for the common good. Whether its strengthening community involvement or improving environmental sustainability, encouraging constituents to contribute to maintaining public assets is a growing trend. With an increased deployment of the Internet and other advanced communication media, residents can now interact with municipalities and oversee asset management much more efficiently than in the past.

A city’s infrastructure is an essential asset for the government as well as its people. A well-maintained infrastructure helps ensure that residents can enjoy it and that it can contribute to their quality of life.

Ville de Lévis , in the Chaudière-Appalaches region of Québec, has introduced something similar to the law of commons to improve its residents’ quality of life. The City, which is also a regional county municipality, has approximately 145,000 inhabitants as of 2017. 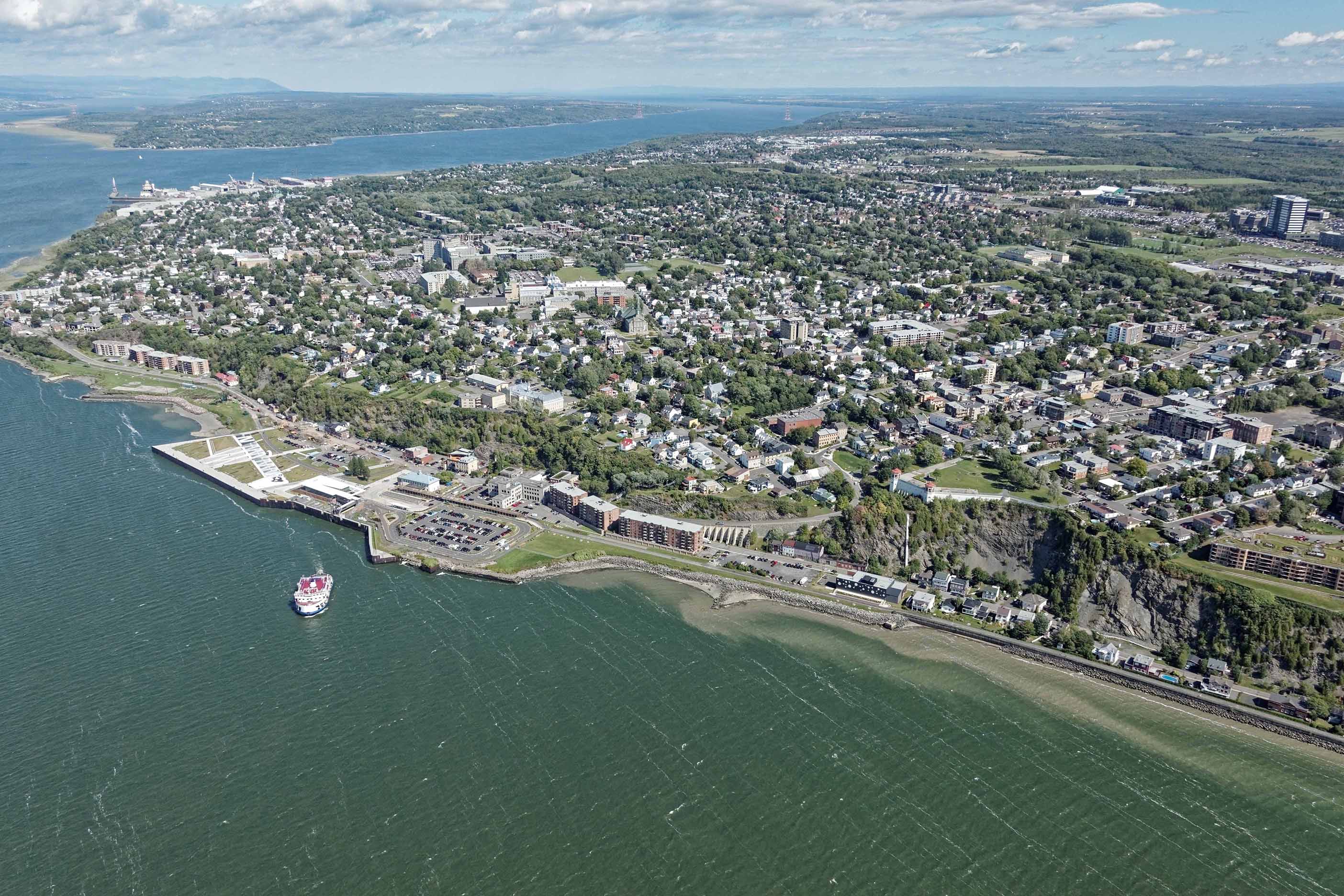 In 2001, Ville de Lévis invested in Esri Canada’s ArcGIS technology. Later, in 2008, it acquired the GOcité app to manage geospatial data. At the time, GOcité was a partnership with 10 Québec cities and the app had more than 100 spatial information layers, infrastructure and environmental data. This was shared with hundreds of users through the City’s intranet. GOcité not only helped improve employee efficiency but also enhanced services for constituents. Today, it has expanded to include 25 cities and regional county municipalities.

Ville de Lévis has been a part of Esri Canada’s Small Local Government Enterprise License Agreement (SLG-ELA) program since 2011, which provides them with affordable, unlimited access to geographic information system (GIS) technology resources. The municipality maintains its territory’s infrastructure, including more than 1,000 kilometres of road network. A few years ago, it noticed that during the thawing period after an icy winter, this road network developed numerous potholes, and repairing these needed rigorous follow-up and continued coordination.

For Ville de Lévis, it was important to make the process of reporting a pothole, quick, automated and transparent. After some research and reflection, the municipality came to a decision: involve the locals in the process of reporting potholes. Since residents continuously interact with the road network, they are the best people to quickly inform the City.

Within no time, the geomatics division therefore launched a geolocation tool that allows residents to report a pothole in less than 15 seconds by simply pointing on a dynamic map to the location where they’ve encountered a pothole. Ville de Lévis used the GeoForm app template in ArcGIS Online to build the app and help engage with the public. 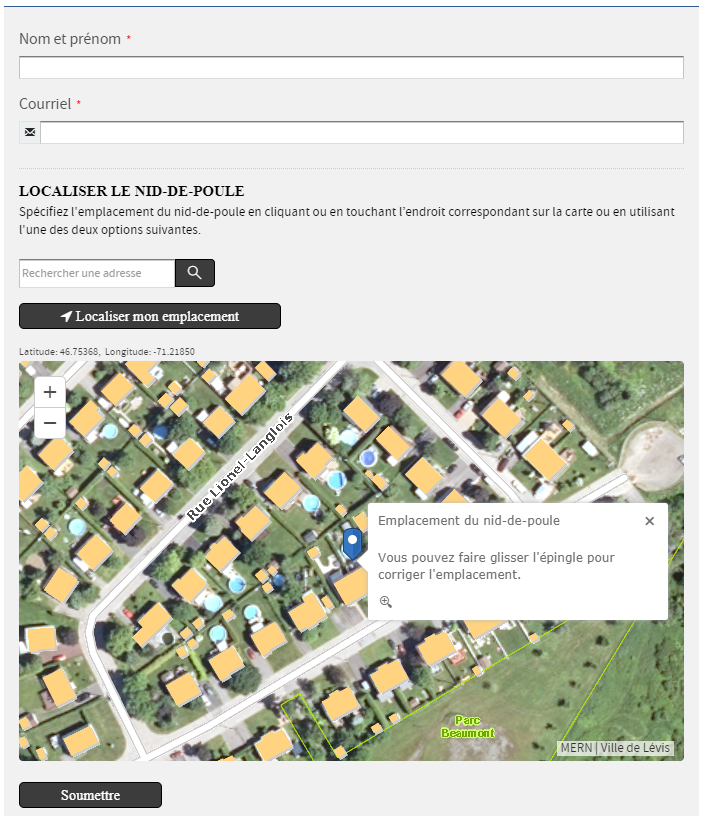 Ville de Lévis’ staff and residents use a pothole-reporting desktop app to conveniently track pothole issues in the city.

Today, the City’s public works employees are able to see pothole repair information in real time. Field crews can also plan and adjust work schedules according to new requests posted online. They can thus complete more repairs in less time because all the information they need is available in a visual format over the web, accessible from any device. Data can be queried quickly, reducing time spent looking up records manually.

Since the desktop app was launched in early 2017, more than 25,000 potholes have been repaired, out of which 2,100 potholes were repaired within 48 hours. In 2017 alone, 1,867 potholes were reported by city residents. Through a simple collaboration tool, the City has enhanced the sense of ownership for public roads among residents.

This brings us back to the law of commons. Giving residents a way to participate proactively in maintaining shared assets in their community can go a long way in enhancing asset life. With ArcGIS, the City has introduced a new level of efficiency and transparency in its municipal process.

When asked about future projects, Martin Labrecque, GIS analyst with the geomatics division at Ville de Lévis, responds, “We changed the aesthetics of the web form this winter; it's now on our internal web server, so we can play around with the code and customize the look and feel of our app.”

“New web maps will eventually appear on the City's website, in addition to enhancements to the ones we plan to create with Web AppBuilder. We’re also using more tablets to increase field mobility," Labrecque continues and adds, "Collector for ArcGIS allows us to make public infrastructure information more sustainable and improve the efficiency of our teams in the field.” While Ville de Lévis staff and residents are enjoying the new geolocation tool for reporting potholes, the geomatics division is already exploring new possibilities with ArcGIS for other municipal asset management initiatives.

This article originally appeared in the Spring 2018 issue of ArcNorth News.