“The only way to do great work is to love what you do.” – Steve Jobs

The man behind the success: David Richard

In a small city that meanders along a river that gives it both its name and hourglass shape, David Richard is living proof that loving your job enables you to do great work. David is the GIS department at the Ville de L’Assomption, Québec. A department of one. His passion for GIS, maps and his work in general does not stop when he leaves the office. To him, a good basemap is an artistic representation of the world around him. 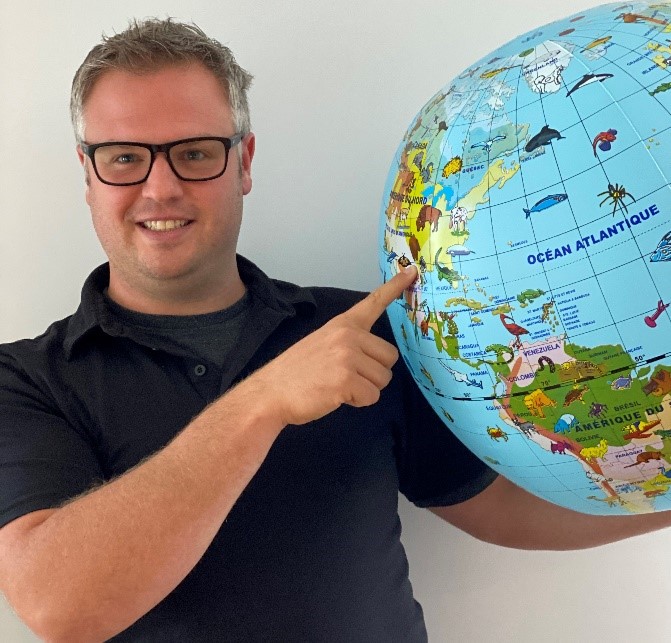 David has built L’Assomption’s GIS practice from the ground up, in 16 short months, to replace the paper/pen and CAD-style operations the city previously had in place. Starting out the city had very little data, and that is being generous, “when I started, we really had close to zero attributes to our data” said David.

Leaning on his close to 13-year industry experience and Esri-product knowledge, David introduced his colleagues and management to GIS trends and how they are used by other municipalities. He then educated them on how these trends can be translated locally to L’Assomption’s operations and that it would not require huge investments to implement.

All he needed was a GPS device (he opted for a Trimble RTK with two antennas), a tablet or smartphone and an Esri ArcGIS Creator license with access to Collector for ArcGIS & Survey123 for ArcGIS. Et voilà, David successfully built application for L’Assomption’s field crews to easily collect data with no GIS knowledge or training.

“So now, we are able to publish and collect more data than ever before. For example, the Urban Planning department field workers can easily collect around 20 – 25 permits daily, while our Road Signs team using the same solution collect around 45 – 50 road sign interventions a day, which is pretty impressive and demonstrates the efficiencies we’ve uncovered,” said David during a chat with him earlier this month.

Data Collection and the Community Map of Canada

With more and more data collected, David realized that to fully capture his city he needed the building footprint on the map, as he believes, “it tells a lot about a city and what’s in the city.”

He waited until he had some downtime to kickstart his mission. During this time, a serendipitous moment occurred coinciding with this project. David came across the Community Map of Canada booth, while attending the Esri Canada Montreal User Conference in late fall of 2019. There he learned about the goal of the program; to build a highly detailed, up-to-date and, most importantly, authoritative basemap of Canada.

“Once I knew about the Community Map program I was like ‘well, we got to start and share our data with the GIS community. We want to improve our basemap and our knowledge of the basemap and our territory, so why not participate in this program?’”

When he noticed that surrounding municipalities like the City of Montréal, as well as other small communities, were Community Map contributors he was determined to put L’Assomption on the map, too. 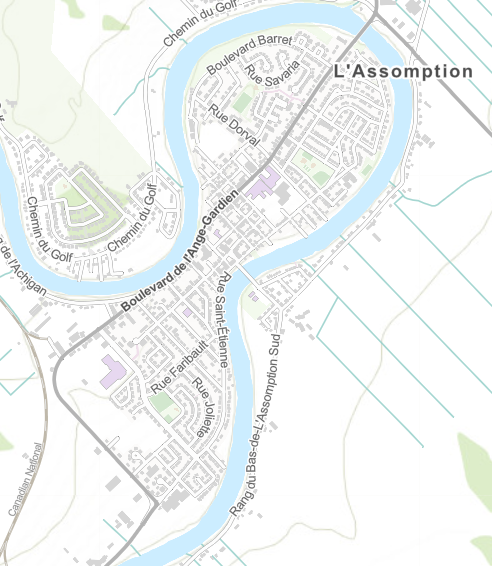 And so, the journey began. The Community Map team offered support, which propelled David’s work to complete digitizing the city’s building footprint in just about one month’s time. Today, Ville de L’Assomption’s Police & Fire departments have access to a web map, where they can see all the building details all in one place without needing to load a file or a service, something that was not possible 10 years ago. David finds working within the technology pretty fast; everything is there and “Esri products are truly a complete platform.”

The consistency of data on the Community Map basemap allowed David to publish and share applications faster to more departments such as the Civil Engineering and Water Utility Network. He attributes part of his speedy output to his collaboration with the Community Map team, and the quick turnaround to update the basemap.

Each winter the city relies on an external company to plough and salt it’s streets. In the past, the crew complained about having to fill out the paper forms while working in the sub-zero temperatures of Québec. Whipping up a simple application, with the Community Map as the base layer, to coordinate their work assignment, track their progress and document progress turned the matter into l’affaire est ketchup! (Québecois way of saying task done well).

“Also, with this work, we saved a lot of complaints. If someone is going to get their mail and they break their leg, they can’t blame us for not shoveling. Well, we have proof and data here that at 4 a.m. we were there putting some salt. It’s pretty amazing!”

Unfortunately, due to the lack of historical data it was not possible to measure a before and after assessment of the new system. However, receiving only five complaints this past winter can be considered a great achievement. Moving forward David expects to build these metrics into their reports.

“I think GIS is very collaborative, it is upon me and upon us to show what data we have in our city.”

A recent overhaul of the city’s website offered the citizens of L’Assomption access to nine beautiful maps, again all using the Community Map basemap, which demonstrates how GIS and the Community Map program promotes collaboration, both internally and externally, and with the community.

The crowdsourced information from local businesses boosted economic development during the COVID-19 pandemic. This helped many local establishments remain in business and garnered lots of positive feedback, “we’re seeing impressive views on our site with 500 clicks on every map in the first week; an example of how our maps are helping our city residents,” said David. 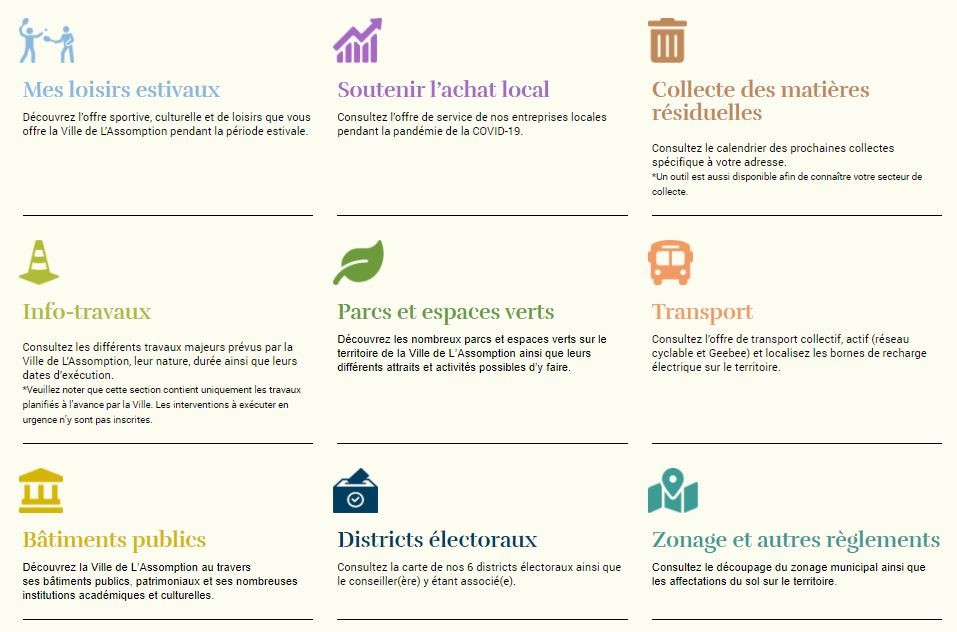 David’s GIS strategy is continuing to improve how they collect and manage data for the benefit of everyone. He recognizes that there is still lots to be done for a proper data structure, something a new server investment could help with. The support and encouragement he receives being part of the IT department will facilitate this aspiration.

David’s confidence that the Ville de L’Assomption can achieve great things is contagious. “We’re smaller than other cities but we want to collaborate with the bigger institutions like Hydro Québec and Énergir. We can provide valuable data.”

“I think every city that has a GIS department or at least one GIS employee in the organization needs to be part of the Community Map program. We received so many benefits from publishing our data that everybody with access to ArcGIS Online can access – we now have a base map and all the data we can collect from the field. Also, GIS is meant to be collaborative, and with this in mind, the program helps you find information and open data – this is quite ‘en vogue’ and the future of GIS.”

Have I managed to spark your curiosity to learn more? Join us on September 15 for a free webinar: GIS Hack: Big wins for small GIS teams with Community Maps, Where David Richard of Ville de L’Assomption will be our guest. Register today to hear more from David and the Community Maps team.