Have you ever wondered what goes into ensuring emergency preparedness at a municipal level? Here’s how the City of Oshawa is enhancing its emergency management process using geographic information systems (GIS).

Imagine a typical disaster scene in a movie: a city abuzz with sirens, cops and safety personnel manning traffic, smoke all around and fire trucks zipping past streets. Then the scene changes to police and fire chiefs, with city officials looking at maps and screens that depict real-time activity. What kind of maps are those and how does all that data get there––at the click of a mouse?

Located along the shores of Lake Ontario in the east of Toronto, Oshawa is the largest city in the Region of Durham, covering an area of approximately 145 km². With a population of 166,000, Oshawa is home to three post-secondary institutions and 20,000 full-time students. The city hosts a leading automobile manufacturing plant, an airport, an international shipping port, busy highways and railway lines; in addition, the city is in the proximity of two nuclear plants.

Emergencies can happen anytime and anywhere and can strike any community. When an emergency strikes, and rescue personnel must be deployed, there’s little time to collect critical information, begin planning or start creating maps. It’s crucial to have a strategy, a program and an information-sharing process already in place, ready to implement when needed. So far, Oshawa has seen a train derailment, major fires and severe weather events, including a major ice storm. The City’s emergency management team has always been very proactive about being prepared for emergencies.

In Ontario, municipalities use the Critical Infrastructure Assurance Program (OCIAP), which identifies the province’s key facilities, systems and networks, and their interdependencies and interactions. A province’s critical infrastructure mostly includes food, water, electricity, gas, oil, government continuity, health and finance systems, and so on. The program ensures that risks and business continuity are managed well, public safety is optimized, and vulnerabilities are minimized.

Keeping OCIAP in perspective, Oshawa wanted to create a repository of information about critical networks and interdependencies that could be updated in real time and made available at its Municipal Emergency Operations Centre (MEOC) to City staff engaged in managing an emergency.

In 2010, the City’s Information Technology Services Branch (ITS) developed an “Emergency Operations Centre (EOC) Dashboard” web app in-house as the primary information source and record-keeping operations log for its MEOC during an emergency.

In 2016, to complement the EOC Dashboard and expand the use of GIS at the MEOC beyond producing hard copy and PDF maps, ITS (which includes a central GIS Services Group) created its “EOC Web Map” app. The web mapping application helps visualize an emergency incident and related events spatially as they unfold, facilitating situational awareness, coordination of municipal efforts and an efficient emergency response. The focus of the web app is to provide comprehensive incident-specific data to everyone involved in emergency management while a scenario is in progress. The data, entered by the central GIS group during an emergency, typically includes areas of impact such as evacuation and staging areas, road closures, power outages and command posts as well as shelter locations. 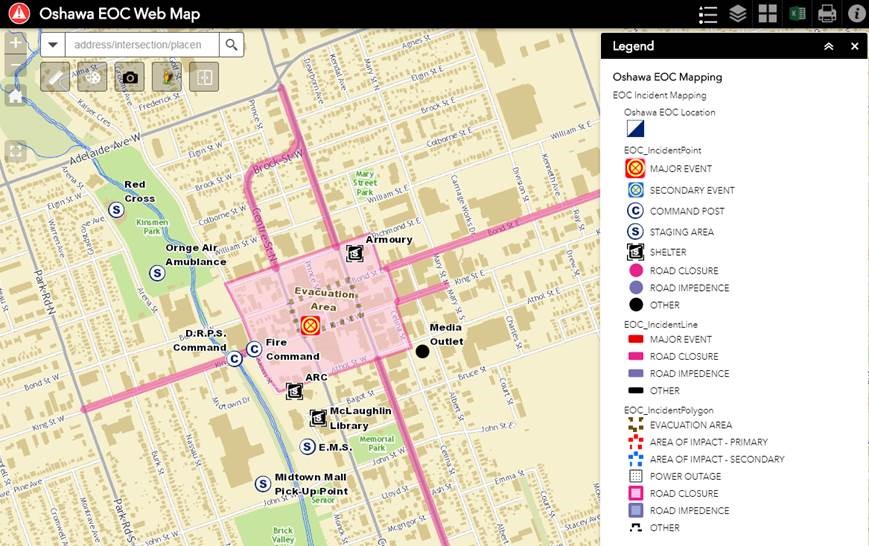 The image above shows Oshawa’s EOC app in action during their annual EOC exercise. It gives a realistic view of the app’s capability to display spatial data critical during an emergency.

The EOC Web Map was created using Esri’s Web AppBuilder for ArcGIS (Developer Edition) along with ArcGIS Enterprise portal. It includes both out-of-the-box and custom widgets that allow users to mark up and highlight features on the map, measure distances and areas, search for locations by address, intersection or place name, view images from traffic cameras throughout the City (from the Ontario Ministry of Transportation and the Region of Durham), and add custom data to the map by drag-and-drop of a spreadsheet containing addresses or coordinates.

Ryan Coghlin, a Senior Business Analyst in the City’s ITS Branch, administers the City’s ArcGIS Enterprise and ArcGIS Online. Talking about the use of GIS in emergency planning and operations, Coghlin said, “We have been using GIS for many years to support our MEOC; however, it was initially limited to desktop GIS to create hard copy or PDF maps. In 2016, we created the EOC Web Map to provide a dynamic, up-to-date view of incident data along with numerous other layers of supporting information.”

Oshawa Fire Chief Derrick Clark, along with other key decision-makers, used the EOC Web Map at their recent annual exercise event. “Our GIS mapping within the EOC is invaluable to our situational readiness and response to emergencies within our city. We utilize our mapping to make various decisions such as evacuation, incident command, and public education and planning,” Clark remarked.

The City’s GIS Services Group is excited about the possibilities that this technology has to offer and sees many ways that the app could be improved in the future. “Currently, our EOC Web Map is accessed only from within our Emergency Operations Centre and the incident data is entered only by our GIS group. Providing City staff field access to the map during an emergency would further help with situational awareness, coordination of efforts and efficient response. Giving other staff access to enter incident data into the app would also make it more flexible,” Coghlin added.

Armed with a robust emergency management workflow, the City of Oshawa is prepared to handle the worst.