Have you ever struggled to share geospatial data with neighbouring municipalities, other provinces or within the federal government? Often, this can be an uneconomical and challenging assignment. You go through the regular process—data licenses need to be checked, data formats agreed to, data models transformed, media created or data files sent along with lots of meetings and phone calls. Then there are the follow-up activities because most data exchanges never seem to go exactly as planned (e.g., this data is off a bit or that data is missing).

While it’s nice to exchange data with your neighbouring government jurisdiction, data exchange is a necessity for many Canadian jurisdictions because much of the small scale mapping is realized by exchanging data. According to the Canadian Geomatics Accord, there is an implied desire for the federal and provincial governments to avoid duplication of effort and maximize cooperation in spatial data collection. They accomplish this by sharing base data.

Thus, the mapping model for Canada is that the municipalities do whatever data collection and mapping is required for their own internal purposes. They then share their basemap data with their provincial geospatial organization, such as GeoBC, Land Information Ontario and GeoNB , which aggregates and conflates the data and fills in any gaps to create provincial coverage. The provinces, in turn, share this data with the federal government which aggregates the provincial data into national coverage such as in the National Topographic System Maps. So there’s lots of data sharing going on.

Esri Canada had also been collecting data from various government jurisdictions and combining (and conflating) it at numerous map scales into the Community Map of Canada. This had become an arduous task, especially as the amount of data and the number of data contributors grew.

So Esri Canada took the initiative to develop the GeoFoundation Exchange (GFX), which provides a modern alternative to traditional spatial data exchange methodologies. The GFX is the national, common, collaborative, open data exchange for accurate and authoritative geographic basemap data. It is designed to facilitate the collection and maintenance of Canadian basemap data. The GFX employs innovative, cloud-based services to coordinate the ingest and update of authoritative basemap producers–making basemap data exchange activities more efficient, more cost-effective and more responsive. 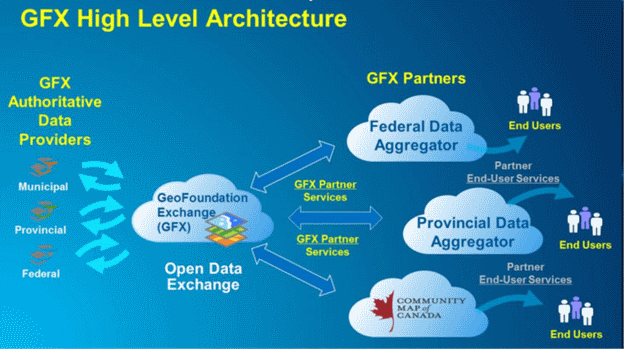 The GFX is an open geospatial data exchange allowing data producers and data aggregators to easily and quickly share basemap data. Esri Canada uses the GFX for the production of the Community Map of Canada, but it can also be used for other data exchanges.

The GFX automates vector data contributions (initial load and updates) from authoritative data providers at all levels of government and organizes this data into a common data repository. Authoritative basemap data producers can efficiently leverage this common exchange to improve sharing efficiency, reduce data exchange costs and improve the products and services that they offer to their own clients and end users.

What’s in this for you?

The GFX is a quick and efficient way of getting your basemap data published or updated to the Community Map of Canada and then automatically published in the world topographic map available on ArcGIS Online. If you’re a municipal, provincial or federal agency that collects basemap data from other authoritative agencies and aggregates or conflates this data for your own purposes, this effective system for data exchange is worth a look.

Learn more about the GeoFoundation Exchange.