The Vimy Memorial in France is inscribed with the names of thousands of fallen Canadian soldiers killed on French soil from the Battle of Vimy Ridge and the First World War, including those whose graves are unknown. What if they could be found? Historian Norm Christie led a mission, with the support of volunteers, to do just that.

April 9, 2017 marked the 100th anniversary of the Battle of Vimy Ridge. While Canadians may remember this event as a moment of Canadian pride and victory, historian Norm Christie took the opportunity to reflect on those who died in the battle. He believed he could identify the whereabouts of 44 missing Canadian soldiers who fought together in the Scottish Regiment.

“We have to treat them as the heroes that they are. It’s our obligation to recover these bodies,” said Christie.

Christie predicted that these soldiers lie west of Vimy Ridge under what is now a farmer’s potato field, which is scheduled to be a site for industrial development. Documents after the war indicate that the mass grave, referred to as “CA40”, lies near an old German mine crater amid unexploded bombs, high explosive shells and chemical weapons, making any expedition dangerous. After Christie identified the rough location of the grave, he enlisted the services of volunteers to help pinpoint where to dig to find it.

Volunteers from Canada and France collaborated on the project. They provided geophysical, GIS, archaeological and other support services. In addition, some organizations donated equipment, shipping and marketing resources.

To help narrow down the search area, a consolidation of historic maps, battle plans, body density maps and aerial photographs were referenced and overlaid. An interactive web map was quickly set up using Esri technology—ArcGIS Server and the JavaScript API—to allow the project team to easily collaborate using all the information. As interest grew, there became the need for more information. That's where the idea for a story map to present the project was born. 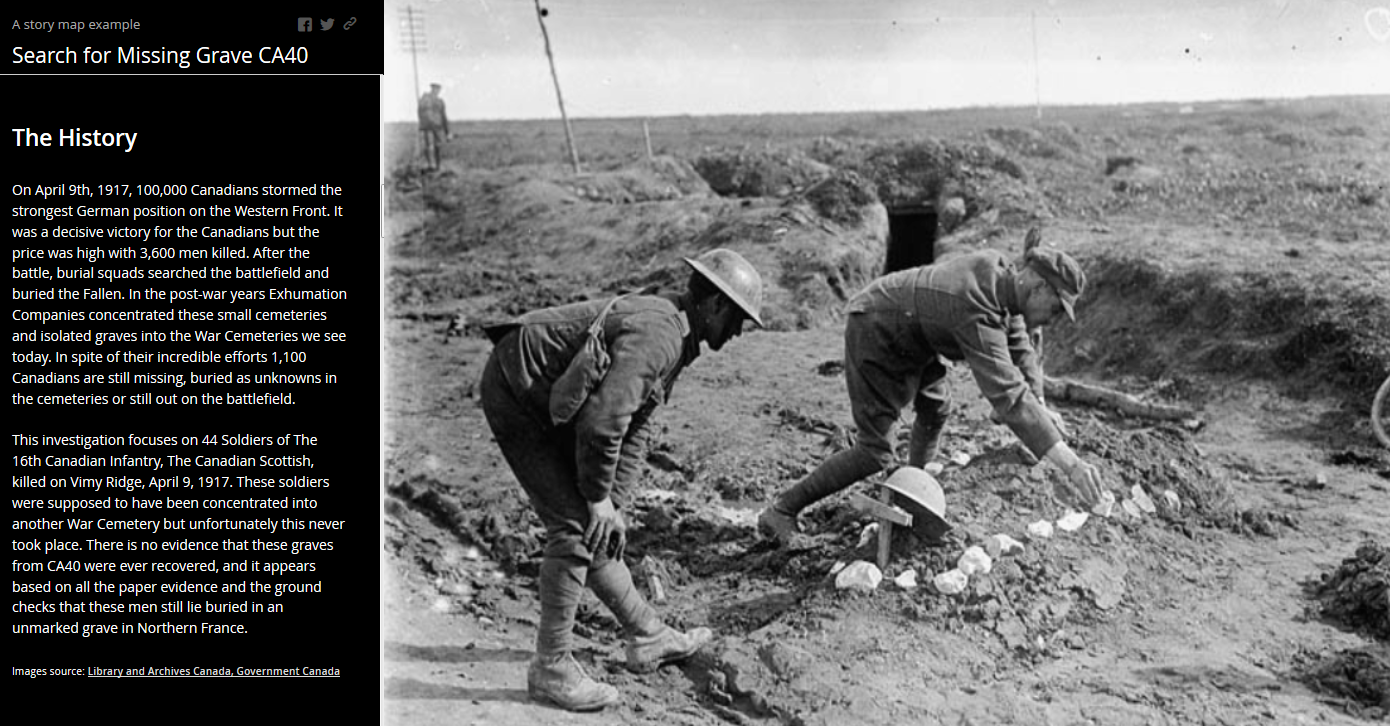 Searching for Vimy’s Lost Soldiers takes you on a journey through Norm Christie’s investigation to find the whereabouts of 44 missing Canadian soldiers from the Battle of Vimy Ridge.

Robert Murdoch, one of the volunteers, shared his insights with us on the map creation process, benefits and future plans.

How did you become involved in the project?

I was asked to source imagery for Vimy from April 1917. Using ArcGIS Online, I quickly identified numerous datasets that were openly available, including an image mosaic around that time frame. An interactive map viewer was set up with overlay tools, including  transparency and swipe, that allowed our team to investigate and narrow down potential burial locations by overlaying historical aerial photographs and military maps that had been compiled.

Why did you create a story map?

Norm and the team collected vast amount of information in various formats. It became apparent that using an interactive web map wouldn’t be enough to help explain the investigation. Instead, we launched an Esri story map to support the narrative of the investigation.

The concept of the story map was to enable the project to be open to everyone and provide enough details so that the public could navigate through the story themselves and get an understanding of the investigation.

What makes the story map different from the web map viewer?

The focus of the story map is different from the interactive web map. The web map tool focuses on providing support for the investigation of the possible CA40 location, and the story map application focuses on telling the story of the battle of Vimy Ridge and provides supporting documents, images and interactive mapping.

Did you encounter any challenges with the development of the story map? If so, how did you overcome them?

There were many photographs that we wanted to incorporate into the application. To do this, we used GIF animation software to create a revolving set of images. We also created a separate web page to use turn.js that enabled us to create a simple flipbook, which we used to support the multiple pages for the war diary.

What future plans do you have for the story map?

When approval is granted, further field investigations will be conducted. We’ll update the story map with more details of the investigation as they become publicly available.

Norm Christie and his team of volunteers, including geophysicists, archaeologists, data managers, bomb disposal officers, forensic investigators and families of the missing soldiers, attempted to locate and recover the men of CA40. Their documentary, “Searching for Vimy’s Lost Soldiers,” filmed by Breakthrough Entertainment, aired on April 9, 2017 on the History Channel.

Learn more about Esri Story Maps. Explore the Searching for Vimy’s Lost Soldiers story map and leave a comment below.