How can one gauge the impact of Canadian wildfires from space? What is Canada’s roadmap for digital delivery? What’s new in Esri vector basemaps? Find out more on what’s happening in Canada and globally in the world of Spatial Data Infrastructure (SDI) in this collection of the latest and most significant SDI news, data, and products.

The Government of Canada announces winners of the Smart Cities Challenge

Canada's Minister of Infrastructure and Communities recently announced the four winners of the country's first-ever Smart Cities Challenge. The winners will receive prizes worth a total of $75 million, which will be used to implement their visions. The winners are the Town of Bridgewater, Nova Scotia; Nunavut Communities, Nunavut; the City of Guelph and Wellington County, Ontario; and the City of Montréal, Québec.

An EPIC view of smoke over Canada 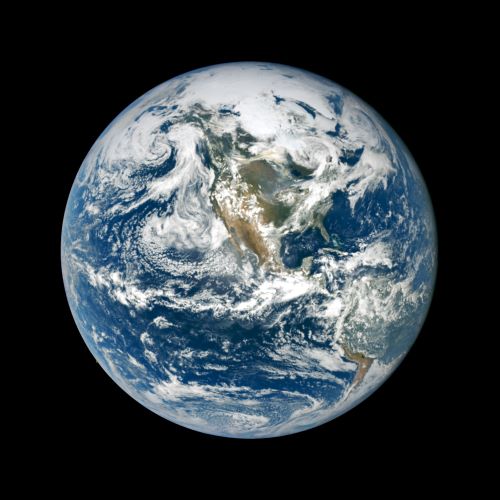 Smoke from several large wildfires in Canada was so thick and widespread that it was easily visible from 1.5 million kilometres away from Earth. NASA’s Earth Polychromatic Imaging Camera (EPIC) on NOAA’s DSCOVR satellite acquired this image on May 30, 2019, when a river of smoke was streaming east across Alberta, Saskatchewan and Manitoba.

Canadian Digital Service’s recently published report, entitled “The Innovation and Competitiveness Imperative: Seizing Opportunities for Growth”, issued this challenge to the Government of Canada: Digitize all public-facing government services by 2025, so they are accessible by web and mobile phone and available behind a unified login system.

After more than a decade’s worth of scientific and legal work to determine the limits of Canada’s undersea landmass in the Arctic, Canada recently filed a 2,100‑page submission with the United Nations in New York. This marks the first step in the process set out by the UN to obtain international recognition for Canada’s outer limits in the Arctic Ocean, which will confirm Canada’s rights over this area. This is a critical step to fully define the map of Canada.

William Priest is charged with delivering a strategy to revolutionize the UK’s management of geospatial information. As chief executive of the UK’s Geospatial Commission, Priest is charged with creating and delivering a cross-government strategy covering all public data with a geographic component. The UK ranks number two in the global Geospatial Readiness Index; but the government believes that stronger, more coherent policymaking could boost economic growth.

Discover patterns in your data with ArcGIS Arcade

ArcGIS Arcade is an expression-based scripting language for data in your maps. You can use it to do basic calculations, convert field types, and configure symbols, labels, transparency and pop-ups—all without leaving the map. And you don’t have to be a developer or GIS expert. Arcade is for anyone who wants to transform their data values on-the-fly; for example, changing the total number to a percentage.

Esri has released ArcGIS Excalibur, a focused web application that enables search, discover, and image exploitation for timely intelligence. As a next-generation front-end web experience, ArcGIS Excalibur is integrated with ArcGIS Enterprise to improve access, discoverability and use of imagery of all types to include national and commercial sensors.

How Esri’s geospatial software and the Cloud helps business, government and research succeed

Esri is leading the way with a comprehensive geospatial cloud strategy and platform for supporting a complete spectrum of location capabilities. These capabilities range from simple mapping and location analytics to sophisticated tools for addressing complex geospatial problems. Most Esri users are systematically integrating Esri’s cloud-based geospatial capabilities into their operations.