What does the Canadian Geomatics Environmental Scan and Value Study mean for the geospatial community? How can a clear identity for the geomatics sector lead to economic growth? Discover the answers to these questions and more in this month’s SDI Snapshot.

Here’s a look at what’s happening in Canada and globally in the world of Spatial Data Infrastructure (SDI). This July 2015 post is a collection of the latest and most significant SDI news, data, products and events.

In this interview by GeoAlliance Canada, Prashant Shukle, director general of the Canada Centre for Mapping and Earth Observation (CCMEO) at Natural Resources Canada (NRCan), shares his insights on the results of the Canadian Geomatics Environmental Scan and Value Study and what it means for the geospatial community and sector. This interview led to the following article about the relationship between the geomatics sector identity and growth.

How can a clear identity for the geomatics sector lead to economic growth?

Location technologies are evolving at an almost unbelievable rate, new actors are emerging on the national stage and public policies around open government and open data are creating exciting new opportunities. These changes have spurred a national conversation about what the new role of the geomatics professional should be, and how the various players involved can best work together to create the right conditions for growth and continued innovation. 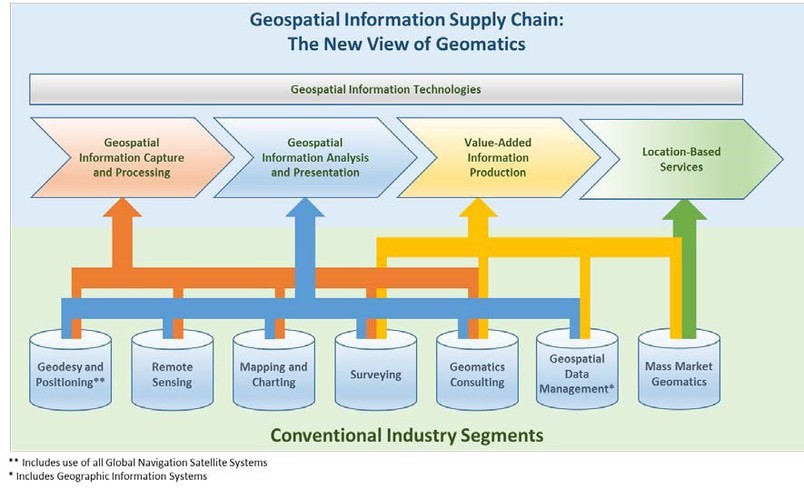 The way the geomatics industry has traditionally been understood and described is becoming obsolete. This fact is reflected in the Canadian Geomatics Environmental Scan and Value Study Summary Report, which moves away from segmenting the geomatics sector by discipline to positioning industry participants along the “geospatial value chain”. Alberta’s Blackbridge Corp. purchased by Planet Labs

Lethbridge, Alberta-based BlackBridge Corp. was purchased by US-based Planet Labs Inc. for an undisclosed amount. The deal comes amid a series of acquisitions throughout the earth-observation satellite industry in an attempt to meet increasing demand for Earth imagery. The deal gives Planet Labs access to both BlackBridge's RapidEye satellite constellation as well as its large archive of earth imagery. RapidEye satellites are larger and can observe larger swaths of Earth (albeit at lower resolution) than Planet Labs' existing micro and nanosatellites.

The highest levels of government are using ArcGIS Online to better inform decision-making and more effectively communicate with the public. In addition to making ArcGIS a cornerstone of several important policy plans, the White House now frequently uses Esri Story Map apps to more clearly explain government issues. Likewise, a growing number of legislators in US Congress are using online Web maps to communicate with constituents about matters that affect their districts. 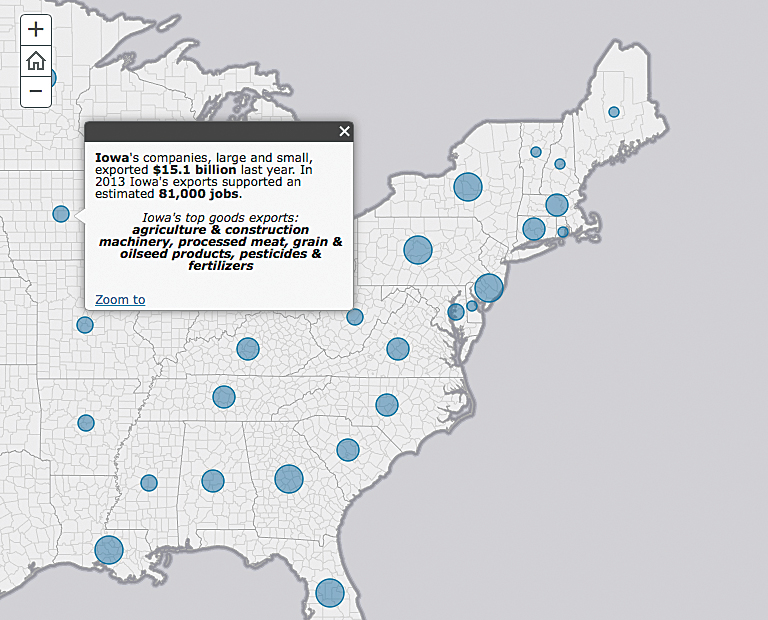 The Knowledge Management unit of the British Columbia Ministry of Environment has published a dataset under the BC Open Government License. These tabular data files contain the historical conservation status information on approximately 7,400 plants and animals and over 600 ecological communities in BC. Current year conservation status data are available through the BC Species and Ecosystems Explorer online tool.

The Alberta Geological Survey (AGS) Open Data catalog features a subset of GIS data related to geology of the province of Alberta and published by the AGS. Users can search the site's datasets by topic, explore featured datasets or review the full list of AGS datasets at the Web site.

Two views from the top of the world 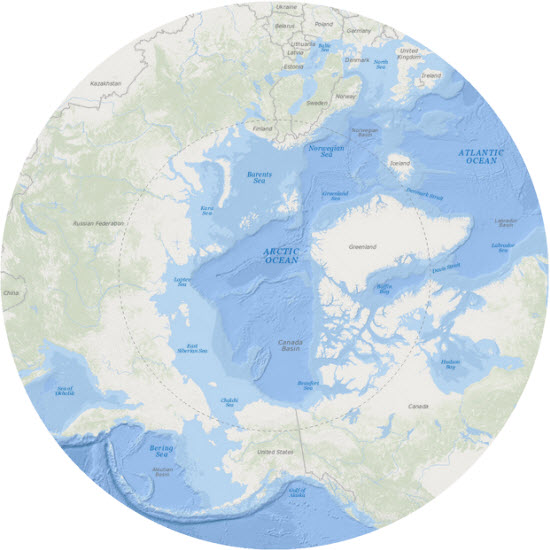 The World Imagery basemap was updated across much of the United States for the second time in four months. The addition of more recent 1-metre resolution USDA Farm Service Agency imagery from the National Agriculture Imagery Program (NAIP) now provides NAIP 2014 imagery for 25 states. The imagery is available at scales ~1:36k to ~1:4k and replaces two- or more-year-old imagery in these areas. The sub-metre imagery from DigitalGlobe and community contributors is still visible at the two largest scales (~1:2k and ~1:1k) because of its higher resolution.

Geospatial metadata is information that describes a spatial file or data layer. In ArcGIS Online, an item's metadata can now be created, edited and viewed in the item details page in an industry metadata standard layout. Details include title, type, source, author, last modified date, thumbnail and tags, and may also include a summary and description, how accurate and recent the item is, usage restrictions, credits and so on. This information can help others discover and validate the usefulness of the items.

PredictION is an app that provides transit authorities with a unique approach to engage and inform the public. By making use of General Transit Feed Specifications, PredictION allows users to predict the impacts of possible changes in the transit system and assess differences in service between current and proposed services. The app was developed in response to the Esri Canada Centres of Excellence 2015 App Challenge, which asked contestants to make creative use of Esri technology to solve local issues.

London, UK from UrtheCast on Vimeo.

London, UK from UrtheCast on Vimeo.

Vancouver-based UrtheCast recently released the world’s first full-colour HD videos of Earth, filmed from the International Space Station (ISS) at roughly one-metre resolution. This video of London, as well as videos of Boston and Barcelona, showcase life on Earth as viewed from the ISS, revealing the diverse utility of UrtheCast’s technology. Interview: with Jack Dangermond - the birth of a new type of GIS

The lines between imagery, image processing and GIS continue to blur. Esri has been working on several technologies that take advantage of cloud computing, integrate image processing and automate much of the tedious work of the past. Earth Imaging Journal spoke with Esri President Jack Dangermond about the company’s many recent and soon-to-be-released offerings. The conversation ranged from the uptake of Story Maps and a new type of geo-journalism, the meaning of “smart” maps, easing field data collection with apps and the explosion of imagery.

GeoNova, which promotes the sharing of geographic information in Nova Scotia, has launched the first edition of the GeoPulse newsletter. It is targeted at GeoNova’s partners and anyone who wants to learn more about the government geocommunity.

The 3rd International Open Data Conference (IODC15), held in May 2015 in Ottawa, was extremely successful. Webcast recordings, session descriptions and presentations, as well as a wealth of guest blog posts reflecting on IODC15 key themes are now available online. Stay tuned for the IODC15 Final Report, which will be available soon.

The INSPIRE Conference 2015 was held together with the Geospatial World Forum in May 2015 in Lisbon, Portugal. The theme of the conference was “Convergence – Policies, Practices, Processes and Public Private Partnerships”. Presentations from the conference are now available for download.