Last October 24-25, more than 150 coders camped out at the Centre for International Governance Innovation in Waterloo. They spent 36 hours developing mobile apps for a chance to win Waterloo Codefest, the City of Waterloo’s first-ever hackathon. Take a closer look at City Tracker, one of the winning apps that leveraged the city’s open datasets and Esri technology.

Last October 24-25, more than 150 coders camped out at the Centre for International Governance Innovation in Waterloo. They spent 36 hours developing mobile apps for a chance to win Waterloo Codefest, the City of Waterloo’s first-ever hackathon.

Matthew Myrah, Marcus Doran, Ethan Guo and Ryan Voisin were among them.

The four came to the competition not knowing one another. After a brief introduction of the individual participants and their skills, they decided to form a team. They developed City Tracker, an app that tracks city neighbourhoods to highlight the disparity between lower and higher income housing. 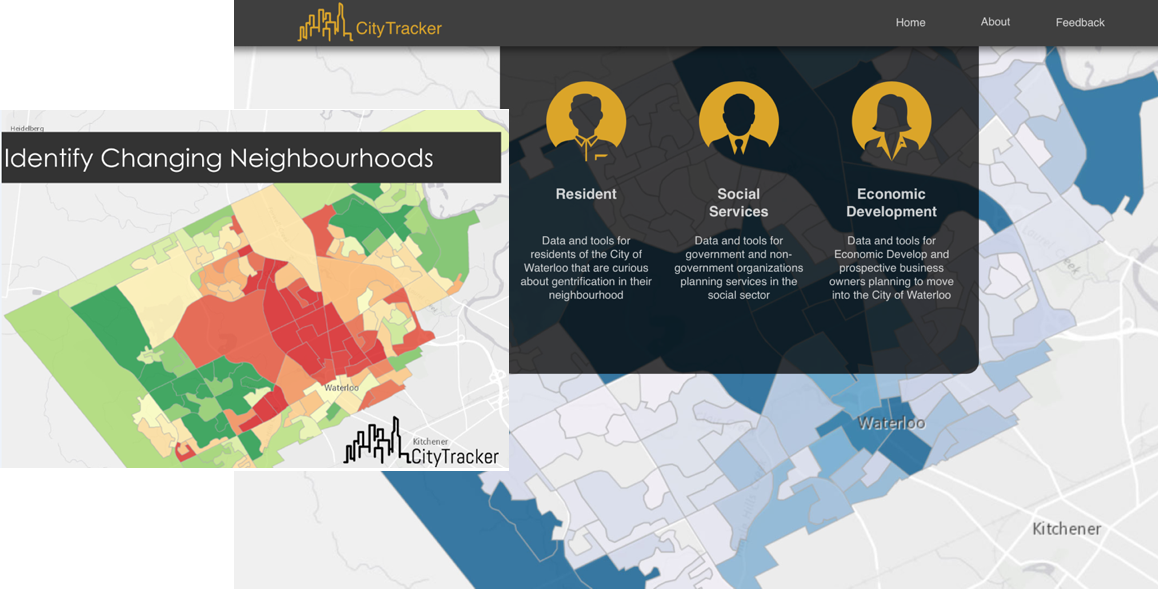 City Tracker was developed to help analyze and mitigate the negative effects of gentrification (the renewal of deteriorating neighbourhoods accompanied by the influx of affluent people who often displace poorer residents) and allow the city to monitor the health of neighbourhoods. Using the app’s data and tools, government could improve the planning of social services while prospective business owners could learn more about the city’s neighbourhoods to inform site selection decisions.

Marcus, a software developer and research associate at the University of Waterloo, came up with the concept for City Tracker. He heard Jonathan Reichental, CIO of Palo Alto, California, speak at the CityAge: Waterloo event last year about their open data initiatives including mapping building permits for the city. Piqued by the idea, Marcus never had the chance to do more than ponder the problem idly. A few days before Codefest, he came across this article in the Waterloo Region Record that challenged the tech community to face the downside of revitalization in the region and do what they could to support those being displaced from downtown. This sparked the idea of mapping building permits to track how cities evolve over time.

Ethan, a grade 10 student at Sir John A. Macdonald Secondary School in Waterloo, and Matthew, a fourth-year University of Waterloo student taking Pure Math and Computer Science, were the developers for the team; however, neither of them, nor anyone in the group for that matter, had worked with GIS before Codefest.

Ethan courageously took the lead on the mapping task, while Matthew focused on preparing the data to be mapped. Ryan, a graduate student at OCAD University in Toronto, was the team’s chief designer tasked with building the Web site that hosted City Tracker, styling the app’s interface and enhancing its usability.

With assistance from Esri Canada staff at the event, the team used Web AppBuilder for ArcGIS, an ArcGIS Online app, to build City Tracker. They leveraged ready-to-use workflows in Web AppBuilder to quickly create a powerful mapping app that would work on desktop browsers, tablets and smartphones. 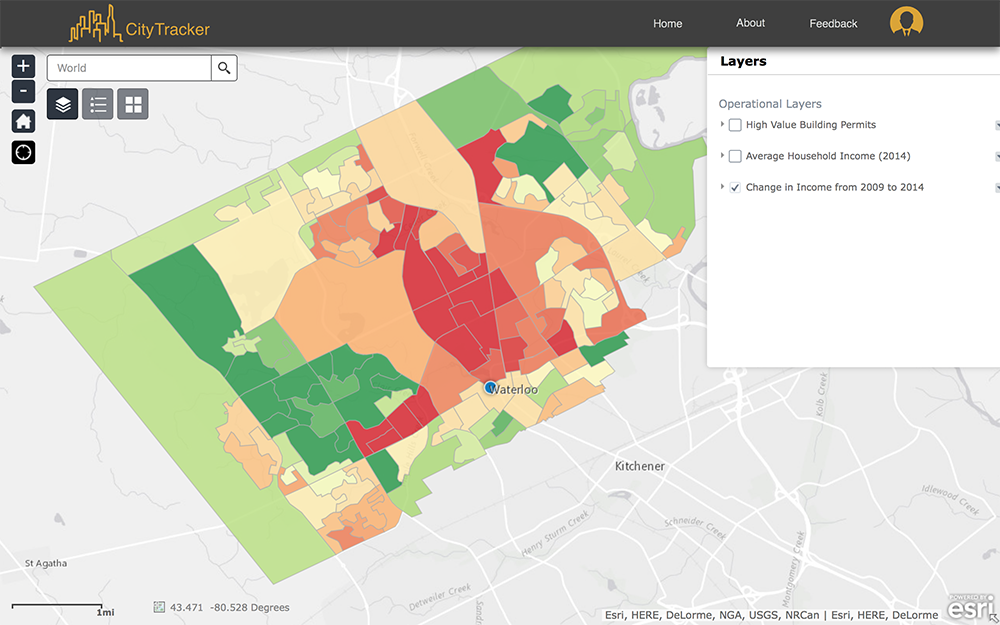 “Web AppBuilder for ArcGIS delivered exactly what we needed–a working prototype built in the absolute minimum of time,” noted Marcus. “It was flat-out the fastest way to get our app working. The final product looked professional and polished, something that we would’ve struggled with had we used another approach.”

Now that they have a lot more than 36 hours to work on their app, the team plans to explore the many tools in Web AppBuilder to enhance City Tracker, extend its coverage beyond Waterloo, and make it a viable tool for visualizing how cities are changing across Ontario.