In September 2014, the City of Calgary was hit by a late-summer snow storm that left over 1.5 million trees damaged. To communicate tree recovery and restoration efforts, the City used a story map as an information portal to provide citizens the most up-to-date information. Learn more about City of Calgary’s Tree Recovery and Restoration Schedule app – October’s App of the Month - in this blog post.

In September 2014, the City of Calgary experienced a late-summer snowstorm. With a blanket of heavy, wet snow to end the summer, an estimated 250,000 city-owned and 1.5 million private trees were damaged. After addressing the disaster with council and proposing a three-year escalated response, the ReTree YYC program was born.

The main public-facing goal of this program is to work with Calgarians to encourage proper planting and maintenance of the urban forest. In order to engage and provide citizens with the most up-to-date information about tree recovery and restoration efforts, the City created the City Tree Recovery and Restoration Schedule – October’s App of the Month – using Story Maps. 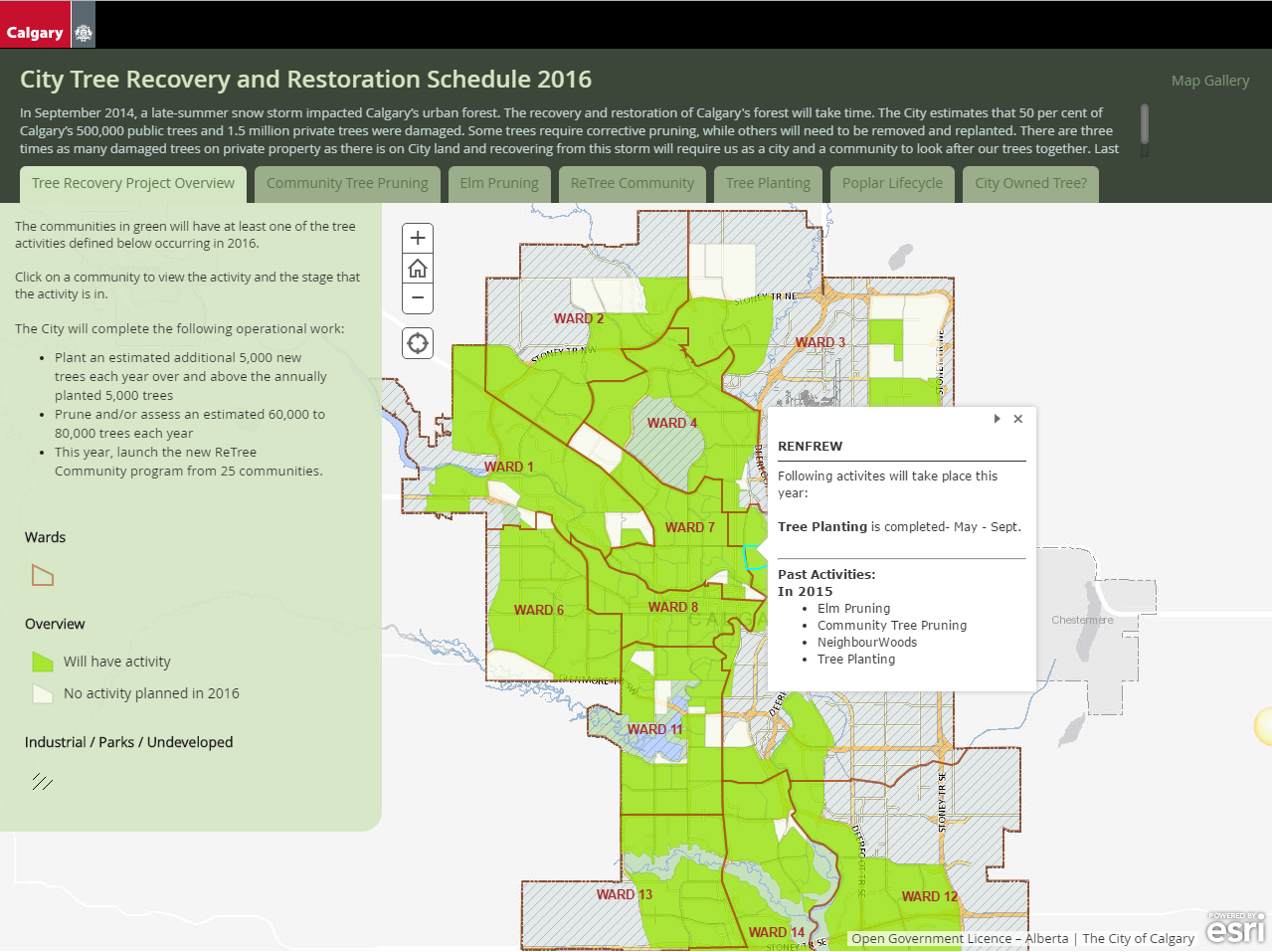 The City Tree Recovery and Restoration Scehdule (above) has helped decrease the number of service requests the City of Calgary Receives by approximately 25%, through providing citizens access to updated data.

When the late-summer snow storm first hit the City, damaged trees blocked roadways, preventing emergency services from getting through. During the initial response phase, debris was pushed off to the side of road. The City determined they needed to inform citizens of how they were collecting the debris. At the peak of the disaster, citizens were phoning in, not knowing what to do with all of the fallen trees. Also, citizens wanted to help; the City quickly realized they needed a solution to efficiently communicate with citizens.

Using story map templates, the city was able to create an app showing where trees were being pruned and replanted. The app has since evolved into a full-fledged public information portal for all tree recovery and restoration efforts in the city. The City of Calgary has committed to promoting transparency across all levels of government; ReTree YYC aligned with this goal in keeping citizens posted on what was happening and where the next recovery or restoration work was planned via the app.

The City had just begun using ArcGIS Online. “As with implementing any new technology, it came with some learning and growing pains,” explained Tony Groeneveld, senior geospatial analyst, City of Calgary. “But the templates and built-in tools in ArcGIS Online made the app development process a lot easier.”

The app was developed using the Story Map Series Tabbed Layout template. “The tabbed layout provided us with the ability to break down a complex story. Using different tabs, we were able to highlight different views that the City wanted to communicate,” said Tony.

“A successful story map has two main components,” he continued. “The traditional GIS component provides the map data, presents it in the best possible way, and we also ensure the data can be updated in a timely and robust manner. The other component is the story telling – getting the information across in a clear and concise manner. For the Tree Recovery and Restoration Schedule, we worked with our Communications team to produce the story map.”

Going through the different tabs in the app, you’ll find that each map provides detailed information on every aspect of ReTree’s tree recovery and restoration efforts. The first tab provides an informative overview of planned upcoming work as well as work that’s already been completed.

Tammy Robinson, ReTree’s project manager, describes how this provides another level of transparency between the City and its citizens. “By communicating where and when we’re going to be, citizens can do their part by assisting field workers in removing any obstructions that may be in their way (e.g., parked cars). This ensures that field workers won’t have to come back at another time to complete their work and helps speed up recovery and restoration efforts.”

Not only does the app provide information to citizens, it has also helped decrease the amount of service requests the City receives. Tree ownership requests are one of the top service requests processed by the City. Calgary has a tree protection bylaw that prevents citizens from working on city-owned trees, thus citizens usually call 311 Calgary to confirm whether a tree is publicly or privately owned. Instead of making a phone call, citizens can now easily access this information in the City Owned Trees tab on the app. All they have to do is find their address by using the Locator and then simply click on the tree they want to look up. A pop-up will provide tree ownership information, as well as data on the tree type, ID and size at maturity.

“The City Owned Trees tab alone has significantly reduced the number of ownership questions the City receives by approximately 25%,” notes Tammy. “This allows the City to reallocate staff resources to other activities.” 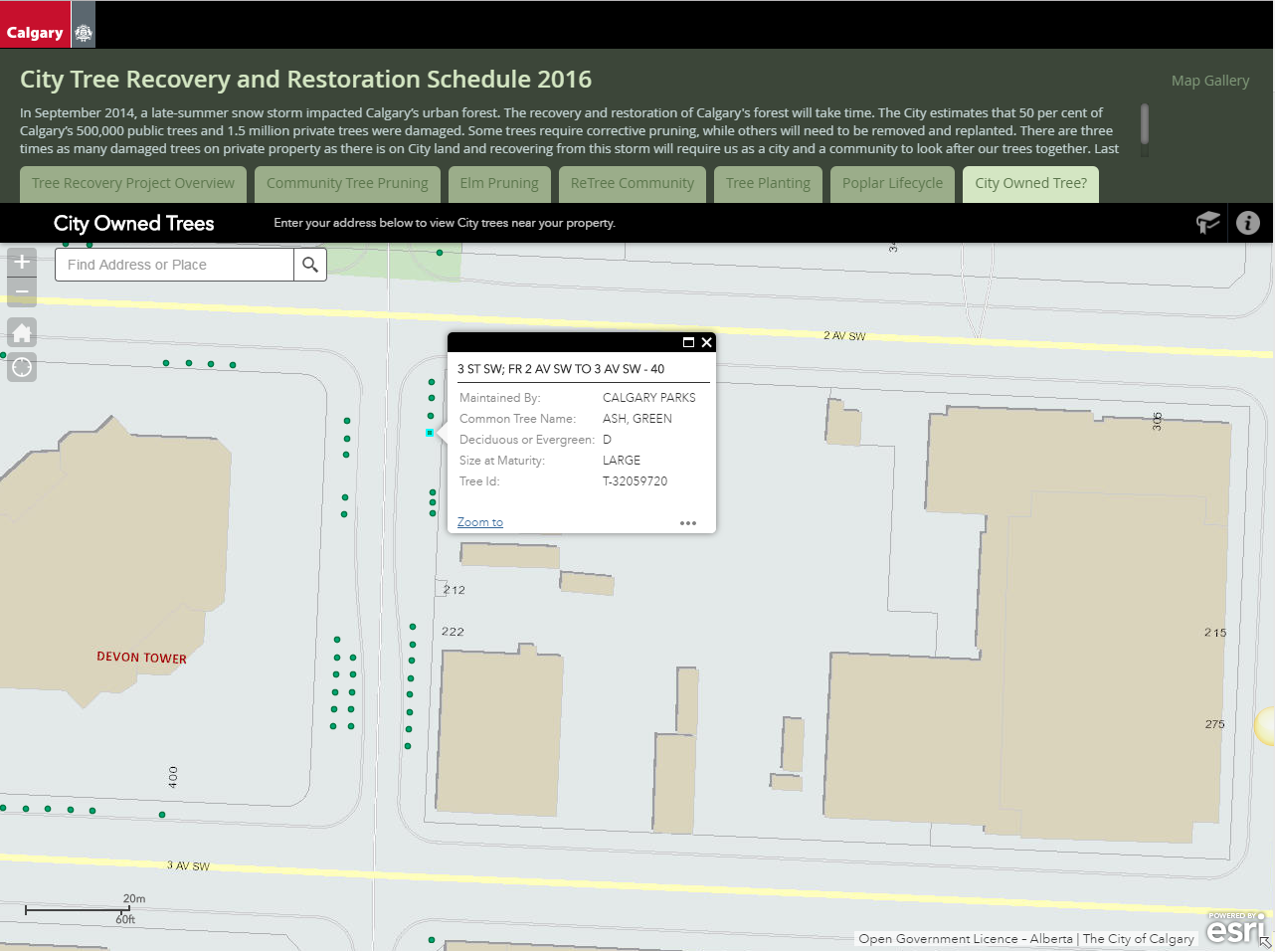 Using the City Owned Trees tab, citizens are able to quickly look up ownership information for trees on their property, without calling 311 Calgary.

ReTree has been an ongoing success due to the continued efforts of many people throughout the organization. Going forward, the City plans to further improve the app’s user experience and consolidate messaging where needed. Currently, the app tells the story of how the tree recovery and restoration project is coming together. With the ReTree program expected to come to a conclusion at the end of 2017, the City is already looking into using the app to communicate tree maintenance activities.

Have you used story maps in support of disaster response? Share your story by commenting below.