With the advent and rapid growth of ride-hailing and other personal mobility options, public transit is facing a crisis of continued relevance. Today’s transit planners are using high tech tools to serve more people with transit, serve them with better frequency and help them access important destinations.

It was 37 degrees Celsius one late Tuesday afternoon not a cloud in the sky. I remember it well; there were at least five bodies pressed into mine, hands were stacked on the pole like an in-process game of “upper hand”, my face barely centimetres from four other faces, two of which were buried in their smartphones, one with eyes closed and the other simply staring up at the ceiling. All of us were sweating. None of us needed to work very hard to oppose the gentle swaying motion of the vehicle we were in since we were so tightly packed. Considering the alternative of crawling along in a comfortable, spacious personal vehicle on the street below at a snails’ pace, our collective lack of personal space was perfectly acceptable. Unlike the cars below, we were zooming along to the next station at 60km/h.

That’s the reality of the Bangkok Skytrain; perhaps the epitome of mass transit – with oodles of ridership and trains bursting at the seams panicked steel straining to contain all the passengers. Much of that ridership takes transit because driving around in Bangkok, particularly on Sukhumvit Road where I was staying, is more often slower than walking.

Thankfully we don’t have that level of density in Canada but what the city of Bangkok has done with their Skytrain is to provide people from all walks of life the freedom of mobility. The Bangkok Skytrain was not designed to attract a specific set of riders, nor was it designed to provide a service to a specialized group of people. It’s a highly impersonal, mass transit system designed to move a lot of people to a lot of places.

Today’s transit planners are returning to that core concept of delivering service to all of their ridership, whether they are delivering service using big-city subways or rural ride-hailing bus-services through public-private partnerships.

While some transit planners are still trying to figure out how to artificially increment ridership numbers, others have discovered that a simple, well connected, walkable and frequent service will encourage people to use the system. The best planner understands that it’s not worth their time to try and predict what individuals do with their day or where that person wants to go. That’s a moving target which is rather difficult to nail down. Instead, by using data driven tools to gain insight into who my transit system serves, how well people are served by my transit system and how easily can people access important destinations by transit, the best planners design an uncomplicated system that gives people freedom of mobility. That’s what public transit is truly about, isn’t it?

The image below shows a bus route and two interpretations of who the route serves. The white outline is the traditional method of determining coverage; it simply identifies what’s known as a fixed distance “buffer” away from the route. The grey zone is a much more realistic view of who the route serves, considering actual walk time to bus stop, noting that people generally don’t like crossing highways, wading through streams or jumping fences to reach the stop – criteria that the traditional method ignores. 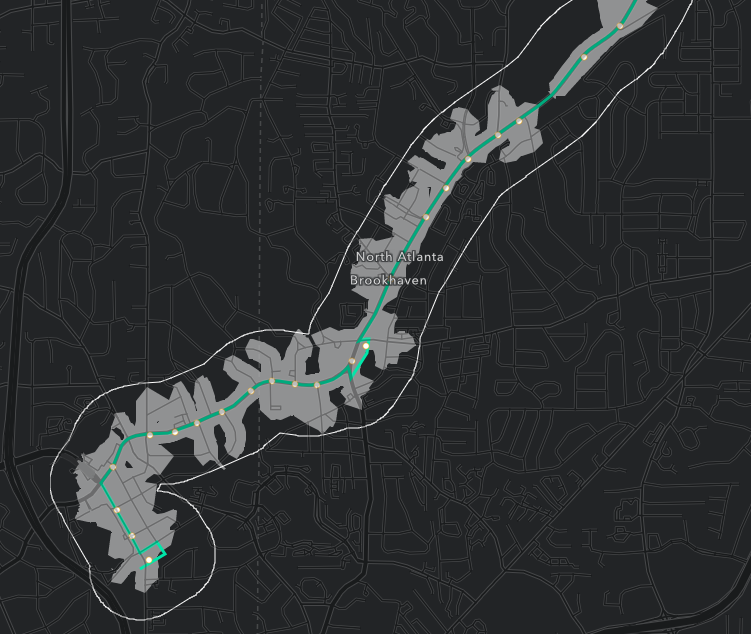 Here’s a similar view of “walkability” for a given transit network. It is clear which areas are beyond a 5-minute walk time to transit. In addition, this map also identifies how often riders can find transit where they do have coverage. Transit frequency is shown using the colour shades; a brighter tone indicates higher transit frequency. 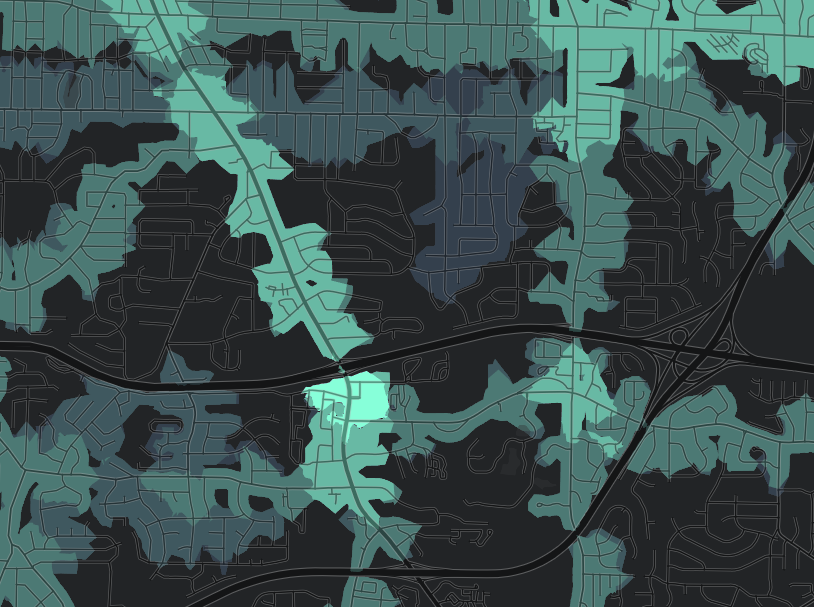 Examining the problem of accessibility in reverse introduces a new level of insight; consider the graphic below, which shows a supermarket and its accessibility within a 15-minute travel time. The lighter shade is a 15-minute walk while the darker shade includes a transit ride. 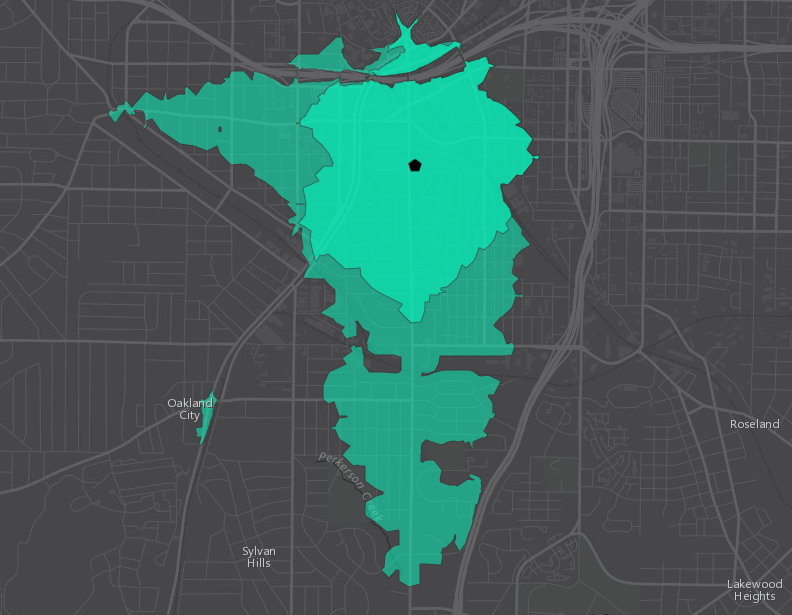 When you supplement these “service areas” with demographics that reveal population density, number of residents and number of jobs, transit planners can reveal striking insight into whether their transit system is truly serving the city the best it can. 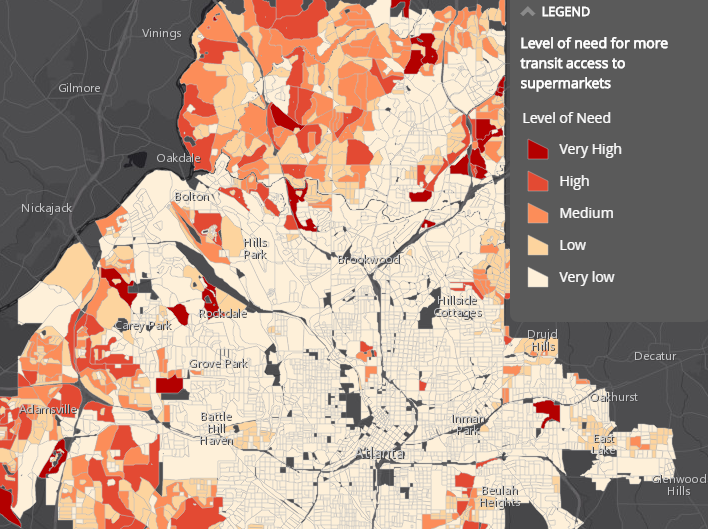 Figure 4: Level of need for more transit access to supermarkets

Today’s transit planners are using sophisticated GIS tools from Esri to perform these types of spatial analyses. When combined with traditional scheduling and resourcing tools, they have what it takes to support Canada’s growing need for better, more reliable and farther reaching transit infrastructure.

According to the Canadian Urban Transit Association, Canadian transit rides have been increasing steadily, surpassing 2 billion trips in 2012 to 2.1 billion in 2015. The Canadian Federal government has also followed through with its 2017 commitment of $20.1 billion for transit infrastructure.

Canadians are increasingly adopting transit or other personal mobility options beyond their private vehicle. Multi-modal trips are becoming less painful and rider choice is slowly evolving. We certainly have a long way to go before we embrace the density and abandon personal space in the Bangkok-style Skytrains, but with data driven GIS tools from Esri, transit planners are better equipped to building transit networks that give the people what we want; freedom of mobility.

If you are interested in exploring GIS in transit further, please join our Webinar on July 25th, 2017: Missed the bus? Not Today’s Transit Planners.