May’s App of the Month is City of Calgary’s Solar Potential Map. See how they used geographic information system (GIS) technology to help residents explore the viability of solar as an energy source for their homes and buildings.

In an effort to remain sustainable, many cities have started to turn to alternative sources of energy to meet the needs of their population. One such source is solar power. The City of Calgary has a requirement stipulating that all new occupied City-owned buildings and major renovations must meet specific Leadership in Energy and Environmental Design (LEED) certification. This is known as the Sustainable Building Policy. To support this initiative, the City has opted to install solar energy systems on some of the buildings it owns.

The City started its assessment of solar potential for City-owned buildings in mid-2016. It used Light Detection and Ranging (LiDAR) technology to compile corporate city-wide 3D datasets. It was then decided to process this data to make it available to all Calgarians in the form of an online story map. The City performed a GIS analysis by using solar radiation tools and shadow analysis for the best possible presentation of information to the public. Working with sustainable infrastructure and communications experts, it gathered information and prepared key messages to include in the story map.

The resulting Solar Potential Map underwent web and load testing as well as cartography quality control before being released to the public in November 2016. By making the story map available to its residents, the City hopes to enable Calgarians to explore the potential of using solar energy for their homes and buildings. 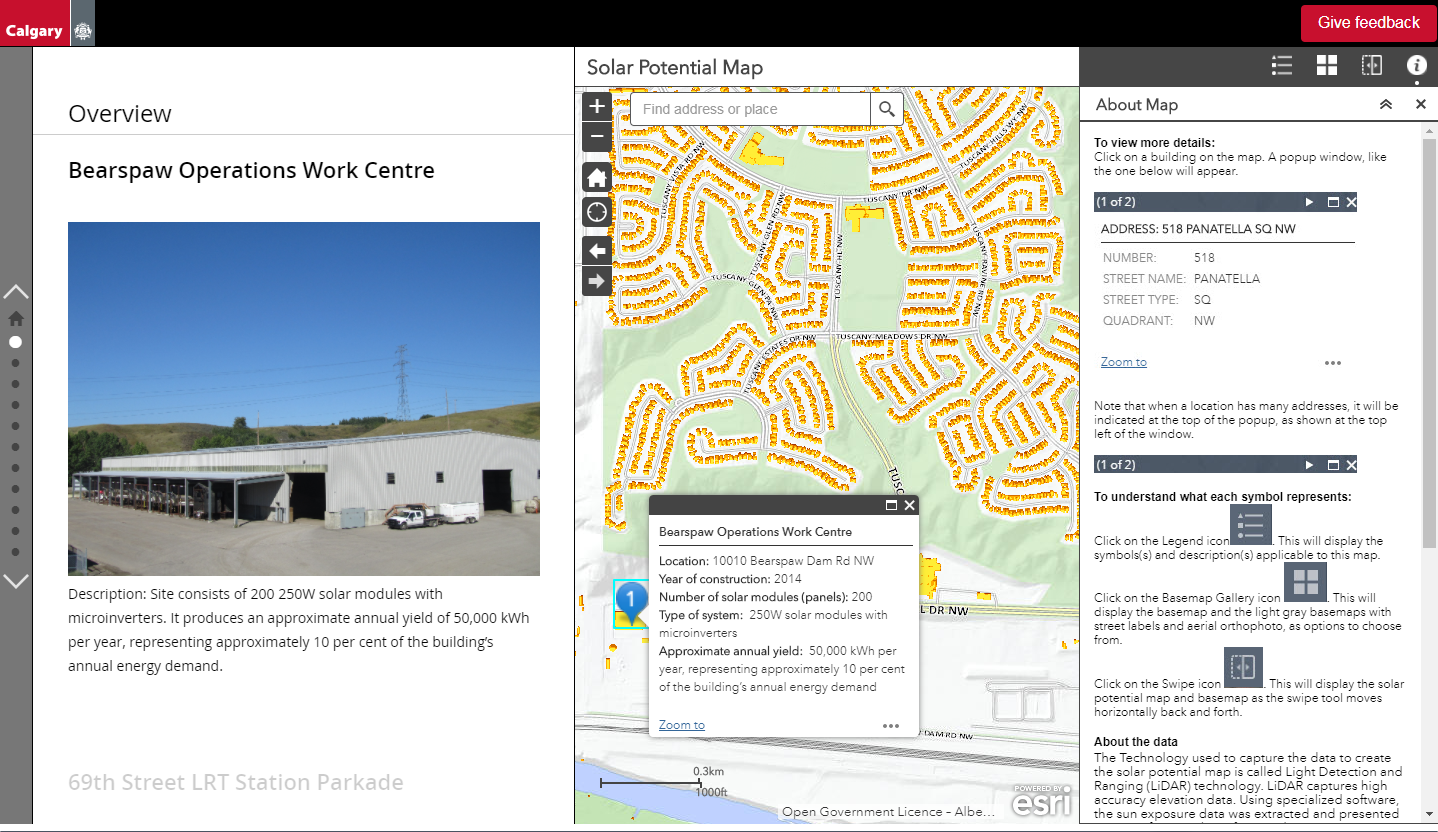 The City of Calgary’s story map is a starting point for Calgarians who are curious about the potential of solar as an energy source for their home or building.

During the creation of the story map, the City’s Sustainable Infrastructure team approached the Geospatial Business Solutions (GBS) Division to provide solar potential data on about 10 specific City facilities that were being assessed for solar energy viability. In addition to the assessment for these sites, the division also provided an extensive evaluation, which included structural evaluations, financial viability, detailed solar exposure evaluations and secured funding sources. GBS also helped the City’s Open Data team in providing city-wide data in the proper format for download via Calgary’s Open Data Portal.

As part of the City’s ongoing Imagery Program, LiDAR technology was used to capture high-accuracy elevation data. With the help of specialized software, sun exposure data was extracted and presented in a map format. LiDAR precision was crucial in capturing geographical latitude, shadowing from buildings and vegetation, as well as the sun's daily position throughout the year. This resulted in a generalized estimate of a roof's exposure to the sun. Esri’s ArcGIS Online software, including the solar radiation tool, then converted this set of high-quality 3D building data into the high-quality output of the Solar Potential Map. ArcGIS Online also includes Esri Story Maps, which provides several easy-to-use templates for combining maps with narrative text, photos and multimedia content. For its story map, Calgary used the Map Journal template.

“Having ArcGIS technology and its suite of tools at our fingertips enabled us to make the most of the complete, detailed data from LiDAR and allowed us to share that data in a relevant, understandable way with our citizens,” says Liz Findlay, Manager of Geospatial Business Solutions.

Following the launch of the Solar Potential Map on the City of Calgary’s website, the app grabbed the attention of employees on the City’s intranet. It also caught the public’s attention on Facebook, with close to 200,000 viewers reached and over 700 sharing the link to the story map. The success was also replicated elsewhere as more than 10,000 Twitter impressions were noted.  The City also received numerous media requests and saw its blog post about the map exceed 36,000 views.

Liz expects the story map will be used by municipal facilities managers and home and business owners alike. “By looking up a Calgary address in the Solar Potential Map, Calgarians can take the first step in determining if their roof has the right amount of solar exposure to further investigate the viability of installing solar panels,” she notes.

The Solar Potential Map supports onsite preliminary assessments of buildings within Calgary city limits. It is also an educational tool for the City of Calgary. Feedback about the app has been great, and some say they have been motivated to buy solar panels. The ability to look up a specific address on the app has been particularly well-received. The story map accumulated 20,000 visits within the first 3 months of its launch and in 2017 received more than 8,600 visits, without any promotion. The City of Calgary plans to update the app this fall with 2017 data and will make it available through Calgary’s Open Data portal. The City hopes this will solidify its position as a leader in solar energy installation and use for city facilities.

Explore Calgary’s Solar Potential Map and leave your feedback below.

Have you created an app or map using ArcGIS that you’re particularly proud of? Submit an entry to our 2019 Map Calendar & App of the Month Contests today for a chance to have your outstanding work featured in our print calendar or our Blog. The contests run until June 8.