The Living Atlas features a wealth of Canadian content including maps that help us understand the history of our geography. A recent addition to the Living Atlas is the L’nu place names map of New Brunswick, which showcases geographic features and landmarks that reflect the kinship between L’nu, a Mi’gmawe’l word meaning “the people” and their environment. Explore New Brunswick’s names of watercourses and landmarks through the lens of the original inhabitants: Mi'gmaq, Wolastoqiyik and Peskotomuhkati nations.

Tom Johnson, geographic information systems (GIS) coordinator at Mi'gmawe'l Tplu'taqnn Inc. (MTI), embarked on a collaborative journey to digitize a map of waterways, villages, campsites, portages and other landmarks recognized and named by the First Peoples of New Brunswick. MTI is a non-profit organization comprised of nine Mi’gmawe’l communities in New Brunswick. The organization strives to enact the Aboriginal Treaty Rights through stewardship and by fostering cooperation and resource sharing across the province.

“Creating a map that showcases the original place names of Mi’gmaq, Wolastoqey and Peskotomuhkati reinforces our connection with the lands and waters in this province,” says Tom. “Using technology to share this historical information is so important because it educates and makes the information accessible to our community members and the broader public.”

The unique languages of the Mi’gmaq, Wolastoqey and Peskotomuhkati

The First Nations of New Brunswick, Mi’gmaq, Wolastoqey and Peskotomuhkati, were oral societies and did not have a written language. Instead, they had a drawing system with petroglyphs, wampum and sticks to convey extensive information. Since time immemorial, the nations used legends, songs, dances and oral history to pass down knowledge. In this way, place names, songs and legends acted as “oral maps” that could be communicated throughout the nations and through the generations. The languages of the Mi’gmaq, Wolastoqey and Peskotomuhkati share Algonquin roots. Reverend Silas Rand, who is often referenced in the map project, expressed that the language resembled Greek more closely than English.

“(The language) is copious, flexible and expressive. Its declension of nouns and conjugation of verbs are as regular as the Greek, and twenty times more copious.  The full conjugation of one Micmac (sic) verb will fill quite a large volume, in its conjugation and idiom it differs widely from English.” (Rand 1875: xxxiv, xxxvii)

During the 1800s, the earliest place names spellings were generated from the phonetic alphabet as heard by linguist researchers among English and French colonizers. Reverend Rand and Dr. W.F. Ganong transcribed extensive dictionaries of Mi’gmaq, Wolastoqey and Peskotomuhkati place names in English while Father Pacifique de Valigny based in Listuguj, Quebec documented the place names in French.

To Ganong, this was a scholarly exercise aimed primarily at his settler society. On the other hand, Reverend Rand and Father Pacifique documented the language as a means to communicate the Christian gospel among the Mi’gmaq. Although their work captured the ancient names of places, it should not be taken at face value today as noted by Sable and Francis (page 16): “Many place names, events, phrases and passages recorded by previous researchers have required reinterpretation in keeping with contemporary orthographic conventions.” 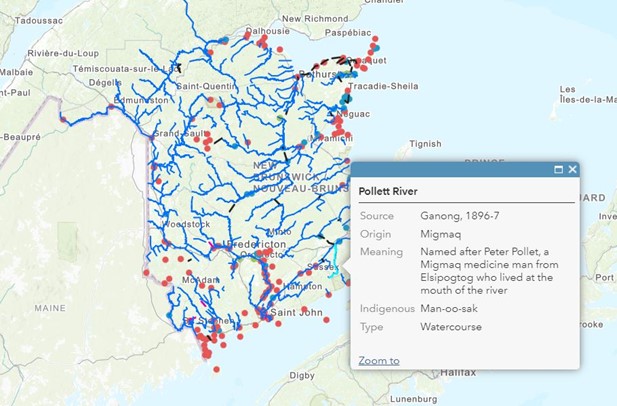 Landscapes and markers used in the L’nu place names map

The Mi’gmaq, Wolastoqey and Peskotomuhkati place names used in the map are based on descriptive words related to features of the landscape. They are mnemonic, as they provide descriptive cues for travelers navigating the lands. In this way, when people share their travel stories and routes, they share a picture of the landscape. This allows other travelers to ‘recognize’ landmarks when they see it for the first time (Gespe’gewa’gi Mi’gmawei Mawiomi, page 27). For example: 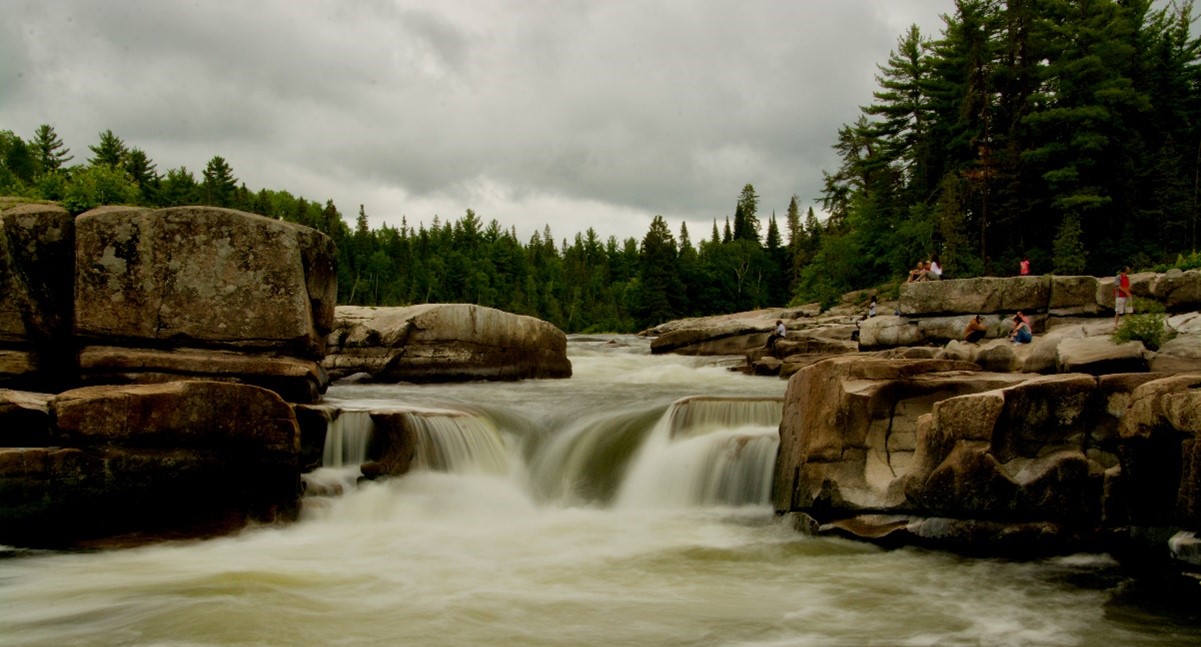 Next steps in the map’s development

Currently, much of the place names information used to develop the map were collected from colonizer researchers documented over a century ago. As the project moves forward, MTI will consult with Mi’gmaq linguists and citizens to verify earlier settler research and further evolve the map. It is expected that most of the new place names compiled from future research will be spelled using the Metallic orthography.

“Through ongoing conversations with Elders and historians, the map will continue to be populated with more information. It is an honour to work on this project and I look forward to continuing this important and fascinating work,” notes Tom.

Sable and Francis, 2012, The Language of this Land, Mi’kma’ki, Cape Breton University Press

Rand, Rev. Silas Tertius, 1875, A First Reading Book in the Micmac Language, Comprising the Micmac Numerals and the Names of the Different Kinds of Beasts, Birds, Fishes and Trees etc. of the Maritime Provinces of Canada.  Also, Some of the Indian Names and Places, And Many Familiar Words and Phrases, Translated Literally into English, Halifax, NS: Nova Scotia Printing Company