Drought, a period of abnormally low rainfall or shortage of water, can cause various negative effects to the human and natural environment. In the province of British Columbia, droughts can be caused by a combination of factors including insufficient snow accumulation, delayed rainfall and hot and dry weather. Providing citizens with up-to-date information on local drought levels can help water conservation efforts. Check out how the Government of British Columbia uses story maps to convey current drought information to its citizens through the British Columbia Drought Information Portal—July’s App of the Month.

Droughts can occur anywhere, and sometimes we don’t realize that it’s occurring until it’s too late. Living in a water-rich country like Canada, the idea of a drought may seem unlikely. Droughts can cause various detrimental effects, not only to the natural environment, but to citizens as well. Droughts can lead to reduced water availability for household and business use. Lower streamflow may cause warmer river temperatures, affecting fish and other aquatic life. The hotter temperatures that often occur alongside droughts may lead to early crop maturity or ripening. Less water may be available for irrigation and animal care, livestock production suffers and pests increase. As if these were not enough, droughts can also reduce crop growth and quality, leading to smaller harvests.

Now, I know that was a lot of negative information, but it’s reality. To help prevent droughts from occurring, we should do our best to conserve water. Not only will conserving water help us save money, we also help protect our natural resources.  Sometimes, we may not be aware that our location is at risk of a drought. One way the Government of British Columbia (GeoBC) has been proactive with addressing the issue of droughts is by developing the British Columbia Drought Information Portal. The portal provides citizens with access to valuable information, including angling closures and drought levels in their area.

Prior to the initial launch of the app in 2015, water management staff needed a new method to quickly and easily communicate drought information. As plans rolled out, there were three main goals in mind for the app:

“We wanted to create a “one-stop shop” site to inform the public about B.C. drought information,” said Ben Arril, team lead, Business Innovation and Emergency Response. “Speed of updates was paramount. It was incredibly important to us to be able to communicate drought information in a quick and efficient manner.” 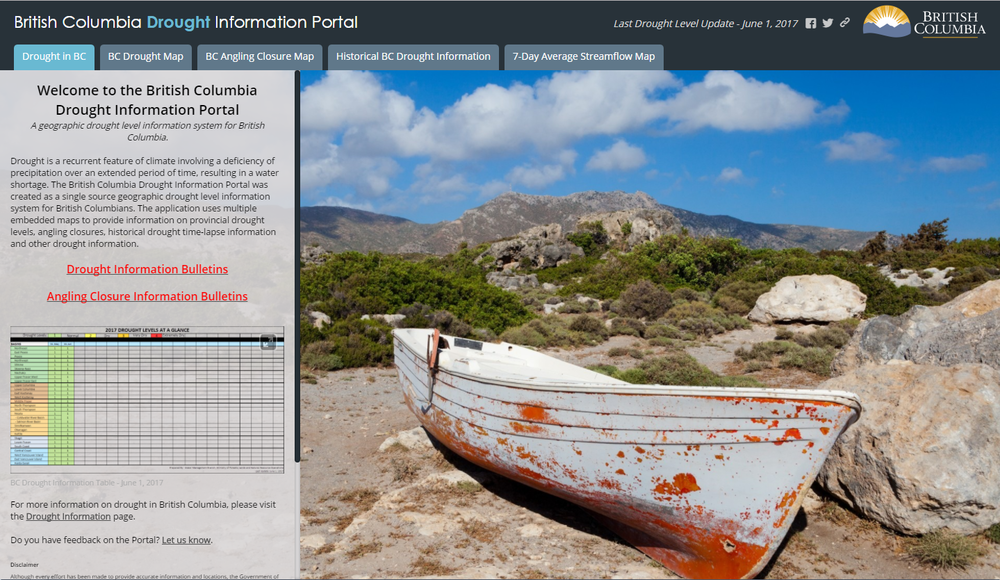 The development of the app was a collaboration among provincial GIS staff, drought specialists, stakeholders and clients.  Many regional GIS staff from across the province played essential foundational roles in creating the portal.

The app was developed using Esri Story Maps, specifically the Story Map Series – Tabbed Layout template. This template allows you to present a series of maps via tabs. In addition to maps, tabs can also include images, video and web content to tell your story and engage your audience.

“The Drought Information Portal combines not only the power of a story map but also the utility of Web AppBuilder all embedded within the Tabbed Series template,” continues Ben. “We like to call this type of combination of apps within apps a GeoPortal. GeoPortals convey information from multiple sources through a "one-stop shop" website (information portal). They can display spatial and non-spatial information, websites, forms and surveys—all in one convenient place.”

The BC Drought Information Portal does a great job of including a variety of web content and apps to inform British Columbians about droughts. The first tab gives an introduction of the app with a compelling photo. Other tabs include embedded content from Web AppBuilder for ArcGIS, another story map (yes, it’s a story map within a story map) and a website. To embed other ArcGIS apps into your story map, all you have to do is copy and paste the app url in the same way you embed a website. This blog post by Owen Evans, product engineer on the Esri Story Maps team, discusses best practices for embedding apps and web content in story maps. 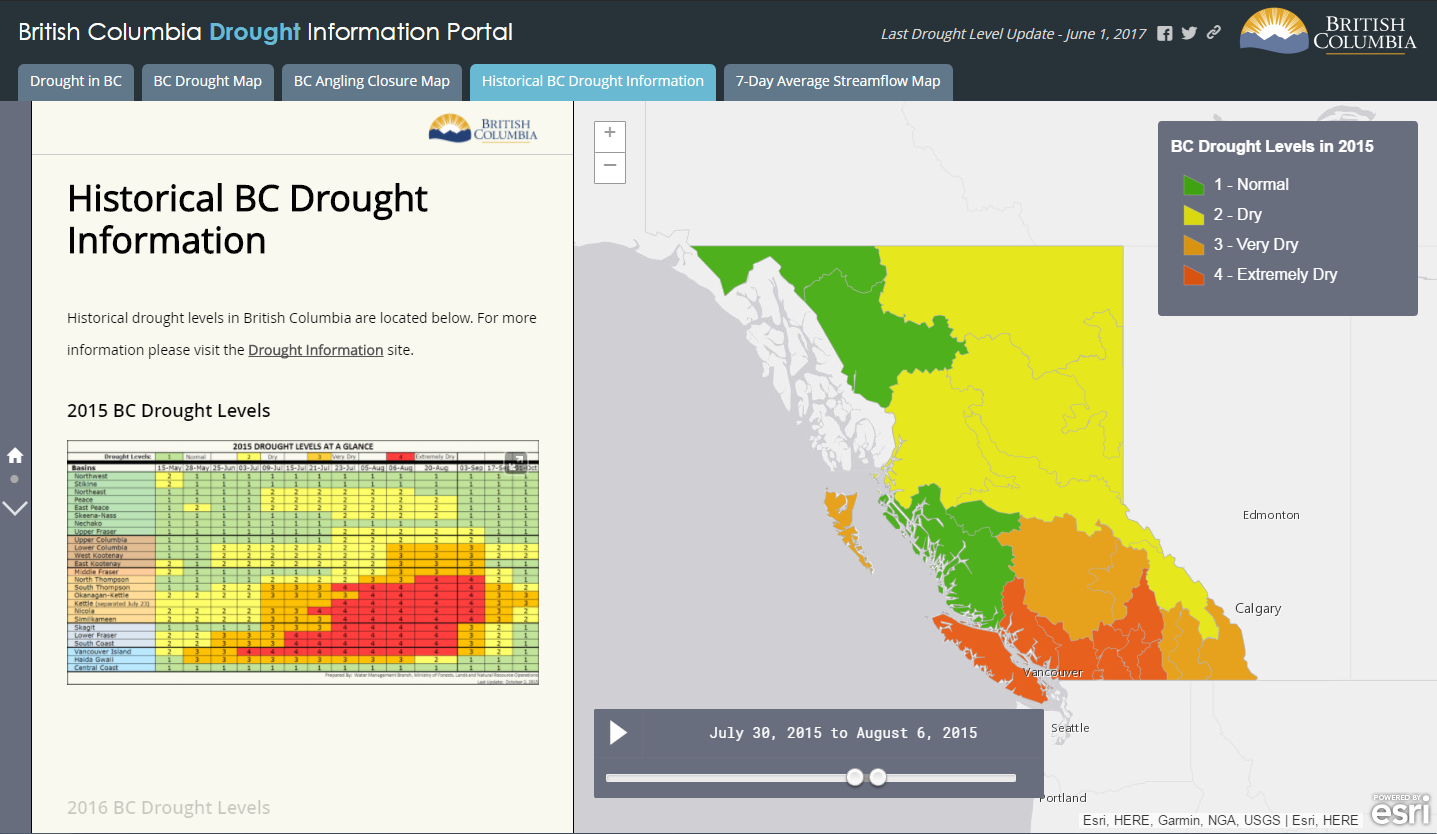 The app was initially launched in 2015 to help communicate drought conditions during one of the worst years for drought in British Columbia history. The app includes a historical drought information time series to visualize how much of B.C. was impacted.

Improving the flow of information

The app itself is very straightforward and easy to use. To get updated drought information near your location in B.C., you can simply zoom in on your location and identify the drought level for your area. You can also use the link in a pop-up to find out more information about water restrictions in your district.

There has been a lot of positive feedback since the launch of the portal and users are encouraged to submit feedback via the app. This helps the B.C. Government better understand what citizens would like to see and answer any questions they may have. Allowing users to openly submit feedback about the app also helps the development team at GeoBC to continue improving the portal and refining their communication strategy.

Drought season has already started for the province. If you live in B.C., you can do your due diligence by visiting the app to determine the drought level of your area to prepare yourselves in case a water restriction may occur.  I encourage you to check out the app and leave an idea in the comments below on how we can all try to save water.