GeoAlliance Canada recently held “Map to the Future 2016”, their first major event in Calgary to begin planning the future of the geomatics community in Canada. So, was the event successful in fostering collaboration, verifying GeoAlliance Canada’s mandate and proposing pilot projects? Find out in this blog post.

I recently attended GeoAlliance Canada’s “Map to the Future 2016” event in Calgary in March. It was well attended by approximately 70 participants from all parts of the country, with various sectors of the Canadian geospatial community represented. 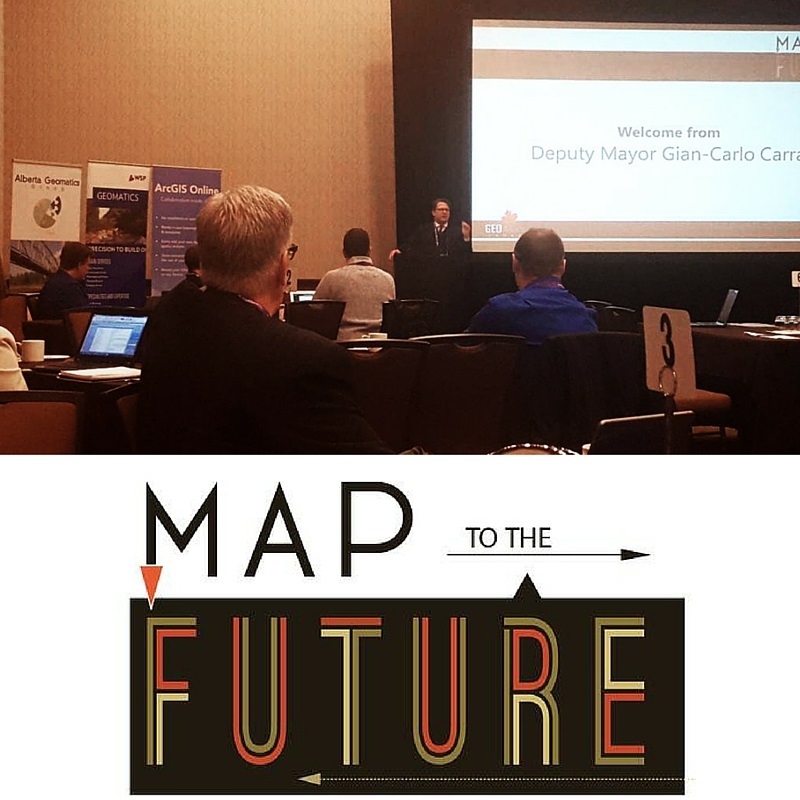 Calgary’s Deputy Mayor Gian-Carlo Carra opened GeoAlliance Canada’s inaugural event. Esri Canada was one of the sponsors and is leading the organization through its first year of operation as one of nine founding members. Read a recap of the meeting. (Image courtesy of AltaLIS)

While the event had the customary speakers, work sessions and social activities, one of the more surprising statements (to me, at least) came from Prashant Shukle, Director General at Natural Resources Canada, who said that there were more than 60 groups or associations in Canada that represented various constituencies of the geomatics community.

The Canadian Geomatics Environmental Scan and Value Study reported that 2,450 private sector geomatics firms contributed $2.3 billion to the Canadian economy, so we know that geomatics is a wide-ranging, important business in Canada. But how does the federal government and others deal fairly with an industrial sector that has more than 60 groups representing the varied interests within the community?

What do these groups do or represent? Well, there are surveyor groups, remote sensing groups, GIS groups, mapping groups and geomatics groups. There are also professional certification groups, professional membership associations, industry associations, innovation development groups, as well as regional, provincial and national groups plus various government groups. All this slicing and dicing leads to lots of potential duplication, but a more serious problem is a lack of communication and coordination among these diverse groups.

This is where GeoAlliance Canada comes in. Among other things, it’s meant to be an umbrella organization that helps coordinate activities among these groups and provide a forum for communication. There was certainly a lot of communication at the Calgary event. Even though there was a broad range of groups and associations represented, no one felt threatened and people were free to speak their mind without concern about repercussions. Many associations did clearly speak out in favour of some type of collaborative framework.

So how will GeoAlliance Canada set up this collaborative framework to coordinate with all these groups and associations that each have diverse interests and activities, and are often separated by many time zones?

It won’t be easy and I don’t believe that GeoAlliance Canada thinks it will be easy.

The Calgary event was a good start to get the ball rolling, but there‘s lots of work yet to be done. The groups and associations can see the benefits; NRCan is providing some initial support; and the community seems to be receptive. The timing is right.

What can you do to help? You can keep up to date with the activities of GeoAlliance Canada. Follow this blog, join their mailing list, follow @cangeoalliance on Twitter and get involved through your favourite group or association. If we all pitch in, we’ll see the benefits of having a coordinated geomatics community if we can give GeoAlliance Canada a great start.