For some time, users have displayed their data on web maps for showing everything from tourist attractions to bus shelters. But did you know that you can perform real-time analytics on your data displayed on the web map? ArcGIS Online provides a range of spatial analysis functions: summarize data, find locations, analyze patterns, use proximity, enrich and manage data, and more. Find out in this blog post how to create and visualize rail accident hot spots using online analytics to help improve transportation safety of Canadians.

Not so long ago, I was working with some staff at Transport Canada on a quick analysis project related to safety issues on the Canadian Railway system. We all remember the safety concerns raised following the Lac-Mégantic train derailment and the resulting devastation. In this pilot project, we were interested in determining if there were any locations with a high concentration of rail accidents; or in other words, if there were any rail accident hot spots.

To conduct a similar or any spatial analytics, we need relevant data, which in this case was available on the federal government’s open data site. For this project, we used the National Railway Network (NRWN) map data that was produced by Natural Resources Canada. The NRWN provides the locations of the railway tracks and other features that are related to the railway such as junctions, crossings, marker posts and stations. Many attributes are also provided for each feature. The dataset was published in 2016, so the rail track features and attributes may not be current in all areas. 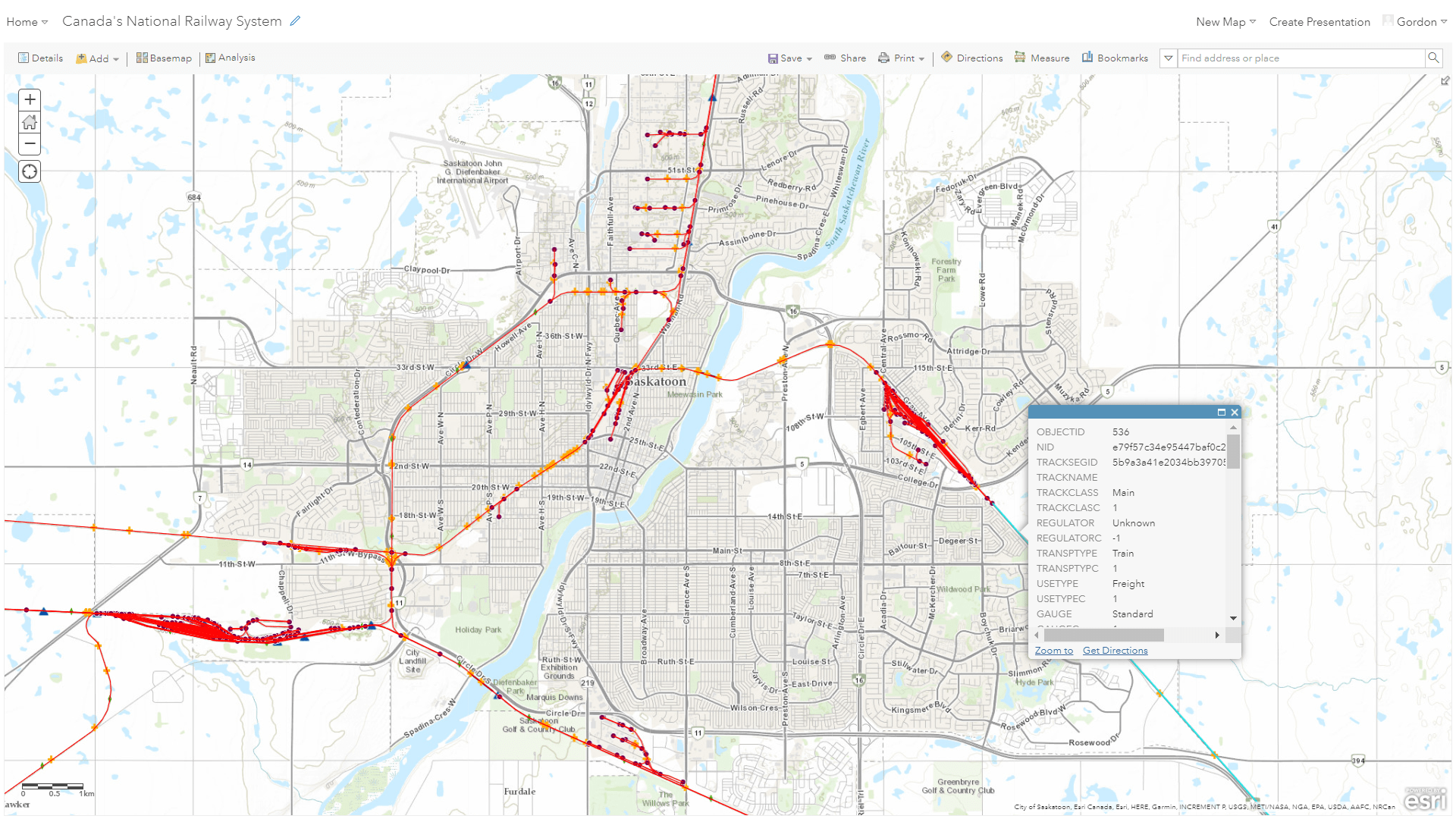 The National Railway Network (NRWN) data is downloadable from the federal government’s open data site in shapefile format. Here is a web map of the NRWN data showing the rail tracks, some of the track attributes and other railway-related features.

Next, we used the rail occurrence data that is maintained on a monthly basis by the Transportation Safety Board of Canada (TSB) and is also available from the federal open data site. The rail occurrence file is a spreadsheet of accidents and incidents that have been reported to the TSB from January 2004 to the present. The file contains a linear-reference location for each accident or incident in Canada by type and by date. The data was downloaded, each occurrence was geocoded from a linear-reference location to a coordinate reference location and loaded as points with attributes into the web map. 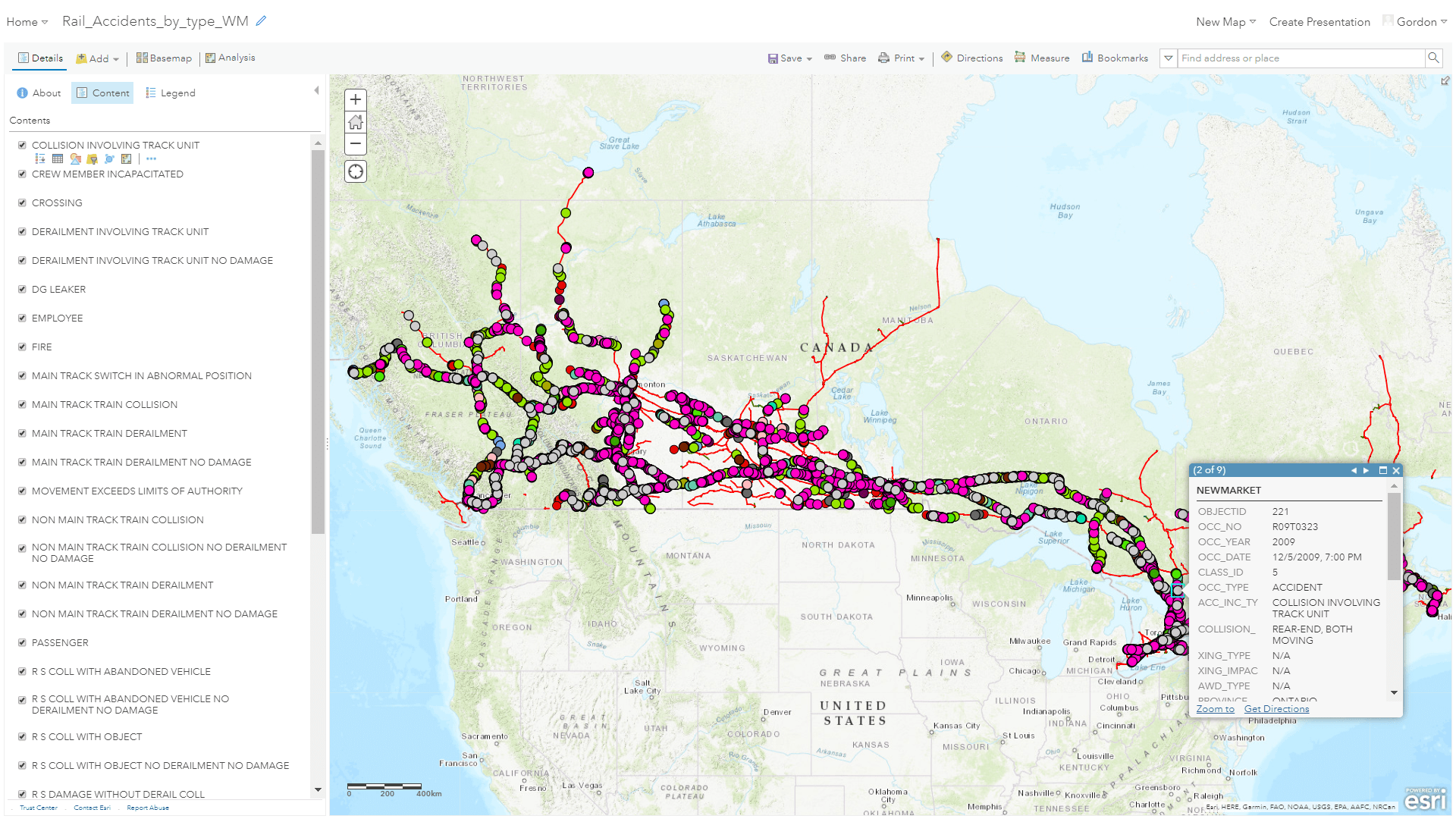 Once the initial data was loaded onto the web map, we used the heat map analysis tool to do an analysis of the rail occurrence data. A heat map is a way to visualize (using various colours) areas with lower or higher densities of the point features of interest. In this application, a heat map was the perfect tool because it showed the locations where there were a larger or smaller number of railway accidents or incidents. Railway safety officials can use this analysis to look for “hot spots” which are locations where there are significantly more rail accidents or incidents than normally would be expected. Once such high-accident prone locations have been identified, the safety officials can examine the map to look for root causes of issues at each of these “hot spot” locations. 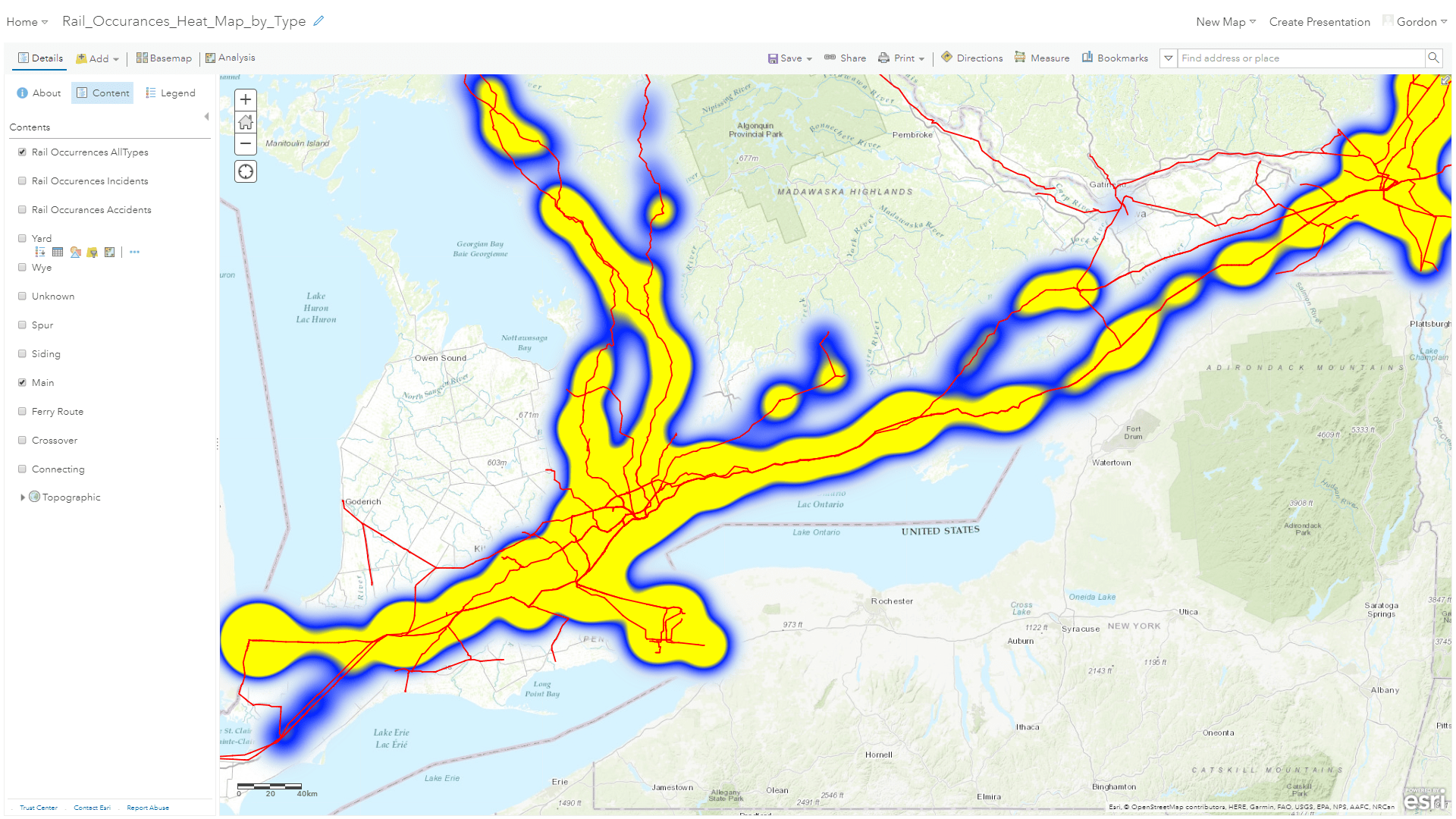 The heat map of rail occurrence data for the Québec City-Windsor corridor. Yellow indicates a higher level of occurrences. The densities and colours can be adjusted to suit the application. 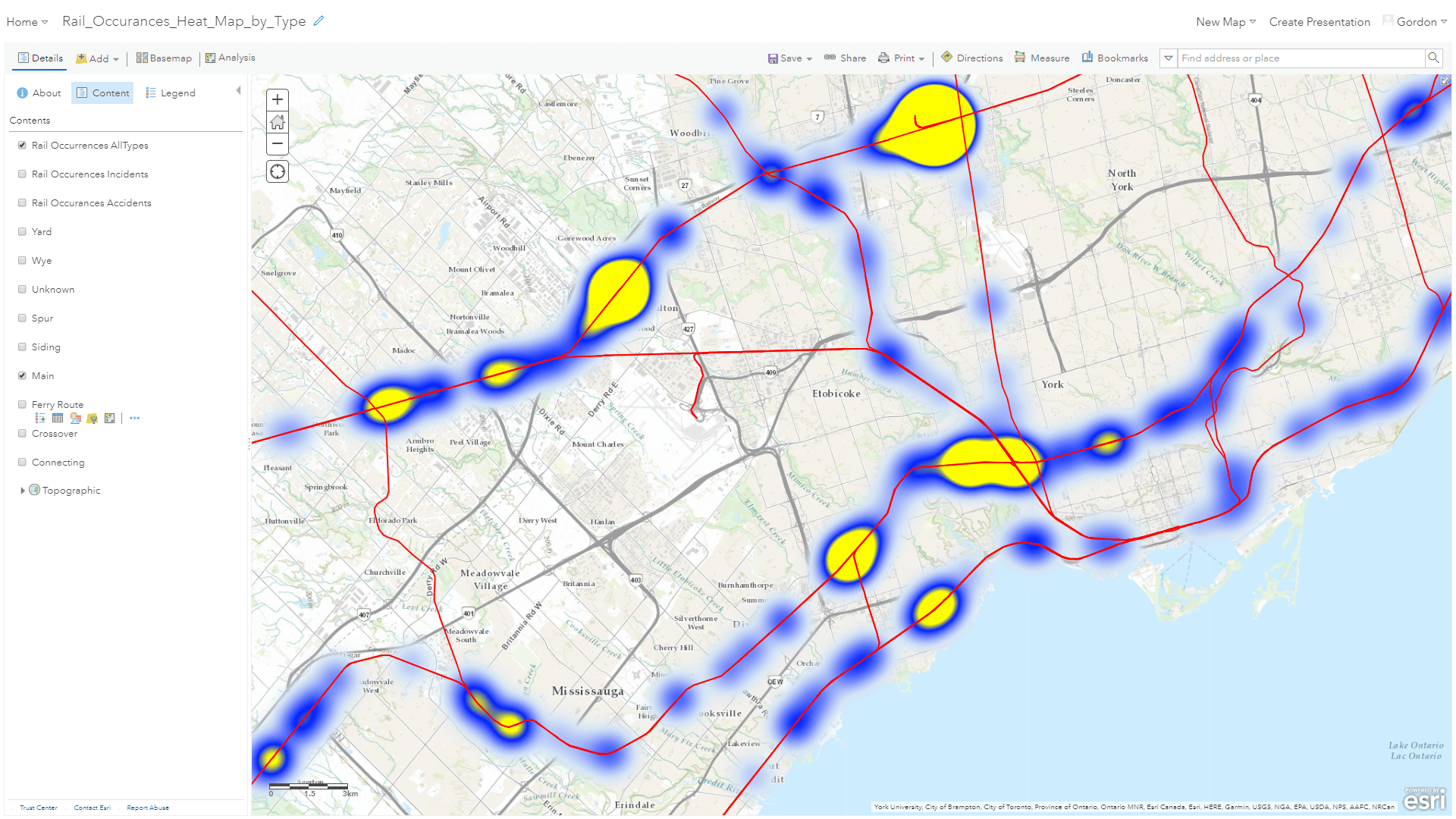 The heat map of rail occurrence data centred near Etobicoke, Ontario. Note that the heat map adjusts the output map automatically based on the area being reviewed This is because the heat map analysis is being performed dynamically by ArcGIS Online and as the user zooms or pans around, the analysis changes based on the map display window.

Thus, web maps can be an easy way to create dynamic map analysis that can be viewed and used by many individuals in a community of users. In this case, the rail safety officials are experts in rail safety and may not be willing or able to create a suitable web map including analysis. So, a GIS practitioner could easily create such a map and provide it to their stakeholder community for monitoring, analysis and potential action. When are you going to make a web map with some analytics functions for your user community?