Disaster assessment has always been central to any public safety effort especially in areas which we know to be vulnerable, but collaborative efforts and cutting-edge technology are now making it much more effective.

So much so that the innovative disaster assessment model we built for the City of Vancouver and TransLink, the sophisticated, complex transit system that serves it, recently won the Information Technology for European Advancement’s (ITEA) Award of Excellence.

Esri Canada is the sole Canadian partner in a six-partner collaborative research and development consortium of industry, SMEs, start-ups and academia. We developed the PS-CRIMSON (Public Safety and Crisis Management Service Orchestration) system, a unique 3D smart model and an integrated information platform, whose focus is public safety and disaster assessment, with a single-entry point for city officials.

The new-found accuracy of these new models is being noticed by transit systems around the world.

TransLink officials continually examine their plans to protect riders because the western seashore is vulnerable to the huge earthquake fault running down the coast. As a result, they were open to new possibilities and wanted to see how making a digital twin could improve their plans. We created a 3D digital model for three of the SkyTrain stations, Chinatown, Burrard and Yaletown as well as two of the Skytrain lines, both of which pass through downtown Vancouver.TransLink shared their open data ridership and schedule information – how many people access the train and how ridership varies during the day – so we could factor that in.

The smart 3D models of stations and transportation lines work as a digital twin of their operations. This makes it much easier to envision different scenarios. Officials can see potential impact levels from a variety of viewpoints. And, post-earthquake, how the implications for the transit system would differ during the course of a day.

Floods always follow an earthquake, so how does 3 metres of water at 8am on a station differ from 1 metre of water at 11pm? What resources are needed and what about the surrounding area? The model included neighbouring buildings in much finer detail than they’d ever had before. The ridership information meant we could simulate how many people would be affected and what vehicles and other resources would be needed. 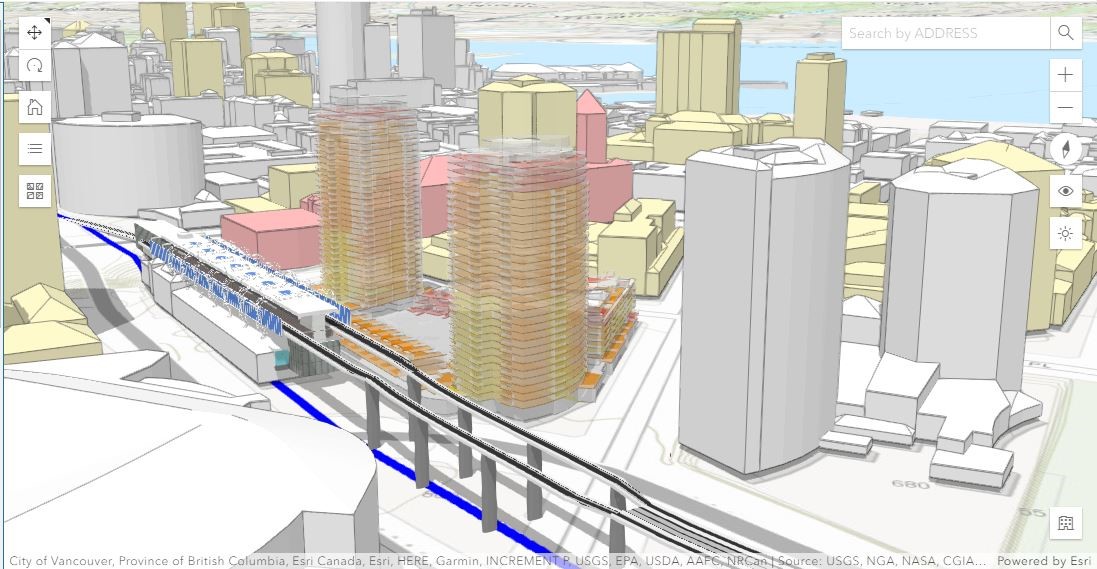 All buildings change a bit after they are built. Things are moved, improved. But all the plans for their stations could only be viewed as they were planned, on paper. The plans didn’t include any renovations that had happened after they were built, so this offered them a unique perspective.

“It’s always helpful to look at new ways of ensuring our transit system is well equipped in an emergency situation,” says SkyTrain Asset Management Supervisor Steven Frick. “We’re excited to see how we may be able to utilize the PS-CRIMSON system for future planning on our extensive network.”

As a result of sharing data, the model could be used to provide insight for disaster planning at stations, such as rising water after an earthquake. The model can help understand the effect on the neighbourhoods surrounding the stations. No longer looking at a census block level over five to ten buildings, they can see the effect of flooding at the level of interior units in the damaged buildings. Predictions can be further enhanced by the use of Assessment Analyst®, an Esri Canada software application that helps municipalities more precisely determine the appraised worth of buildings.