The media industry has become very competitive, with so many forms of news vying for readers’ attention. To stand out, discover how Robson Fletcher from CBC Calgary uses mapping visualization to analyze data, uncover patterns and tell compelling stories.

Data journalism or computer-assisted reporting has become a catalyst for innovative change in the media industry. It involves collecting, filtering and analyzing large amounts of information from databases and spreadsheets. For Robson Fletcher, a reporter and editor with the CBC Calgary digital team, data journalism is fascinating – it’s a largely untapped field because of its high barrier to entry.

“The learning curve for data journalism can be steep at first, especially for reporters who are constantly short on time and aren’t comfortable with spreadsheets and equations,” said Robson.

I met Robson last year at the Canadian Association of Journalists (CAJ) conference in Edmonton, where we held a half-day mapping workshop. In those couple of hours, we showed attendees how to use Esri software and techniques to integrate datasets, visually analyze data and present multimedia content as story maps.

There, Robson realized the value of mapping visualization to uncover stories in data using ArcGIS Online, Esri’s cloud-based geographic information system (GIS) solution. “By the end of the workshop, I felt I had advanced from beginner to intermediate level,” he noted. “I looked forward to opportunities for using what I’d learned to do more advanced work.”

And that’s just what he did.

With the complimentary subscription that he received through Esri Canada’s ArcGIS for Media program, Robson leveraged the rich functionality in ArcGIS Online to find and present data stories.

In his October 2016 article Calgary looks to buy dozens of 'slivers' of private land along 17th Avenue S.E. bus rapid transit route, Robson uncovered that the Calgary City Council aimed to buy land from businesses along a stretch where a rapid bus transit route was going to be constructed.

He integrated address data for proposed land acquisitions with location data of the proposed rapid bus transit route. Because the City doesn’t typically talk about land acquisitions while they’re being negotiated, Calgary residents were surprised to find out about the plan. 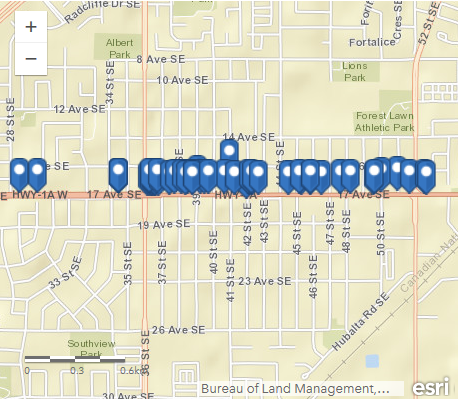 This interactive map shows that the Calgary City Council was focusing land purchases along a major street: 17th Avenue S.E.

In another article, Calgary's cycle track numbers show ridership has grown, but unevenly so far, Robson discovered that ridership increased after the Calgary City Council enhanced the Centre City Cycle Track Network with new, separated bike lanes. He linked city data from two different sources – the targets for ridership and the actual ridership – and analyzed whether the target goals were met.

The interactive map depicted the location of the bike lanes, the nine count locations, and the target levels vs. actual counts at those nine locations. 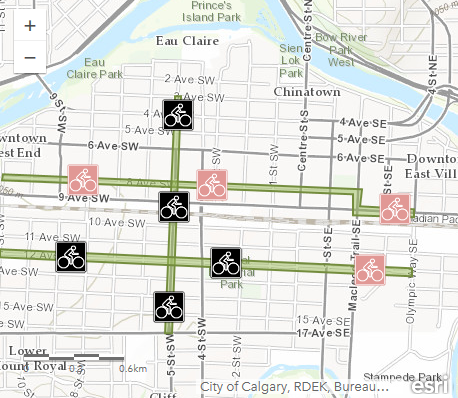 This interactive map shows the various counter locations. Locations in black are ahead of city ridership targets, while those in red are behind the target levels.

The value of mapping visualization

For Robson, ArcGIS Online has become a valuable tool to integrate, analyze and present data. He uses the software regularly to look for patterns, common threads or other starting points for his news stories.

The cloud-based GIS provides journalists with many benefits:

“The embedded maps are generally a hit,” said Robson. “They just work so well for the right story, to present readers with information in a concise and user-friendly way that would otherwise be cumbersome to communicate. People also have commented about how well the embedded maps work on mobile devices, which is a huge plus given that’s how the majority of our online audience consumes our news.”

Robson feels that he has merely scratched the surface of what’s possible with some of ArcGIS Online’s more advanced elements, and he plans to incorporate them into his future stories. Today, he tells bigger and richer stories with maps.

Learn more about Storytelling with Maps. Connect with us at CAJ17 or leave a comment below.