Growing up in the Greater Toronto Area suburbs, I have always been in awe and curious about city life. I considered Toronto a “big” city, but when I got the chance to visit my parents’ hometown in Hong Kong, I was shocked to see how dense it was! Tall buildings were practically a metre apart from each other, all squished on an island. A residential building there seemed to have the same population density of the entire neighbourhood I live in! That was when I realized Toronto was a city but Hong Kong was a megacity. September’s App of the Month, Concrete Jungle: Urban Expansion and the Rise of the Megacity by Spencer Elford, a student from McMaster University, explores megacities and how the urban environment has shaped our modern world.

Concrete Jungle is one of the more compelling story maps I’ve seen in a while, in terms of content as well as interactive experience. It uses the Story Map Journal template, which allows a combination of multimedia to go with the narrative of Spencer’s research. He put a lot of effort into creating, not just one, but multiple web applications in his story map – taking advantage of the embed capability in the classic Esri Story Maps.

3D visuals are a big component of the story map. Spencer used the 3D Data Visualization Template, a configurable interface where you can display your web scenes, to create animation as well as provide an interactive environment for users. In the first 3D visual, a 2D layer was added to the globe to show the density of people around the world. Users can pan and zoom the globe like a regular map as well as click on a place of interest to go through the pop-ups with information on the total population of people employed in the agriculture industry between 1980 – 2010.

Using the 3D Data Visualization Template, a spinning globe was created to show the population density of the world. This template is available on GitHub, so if you are comfortable with coding, you can totally customize the application to the way you want.

The next 3D visualization in the story map, I have to say, is one of my favourites. Using the same application template, 3D cylinder bars were placed onto the globe to show the most populous cities in the world. The 3D bars are a far better alternative to a typical 2D bar chart because each of these 3D bars are shown with respect to their location. The height of each bar illustrates the ranking and size of the city’s population.

Viewing information as 3D cylinder bars on the globe, it’s easy to see and compare the most populous cities in the world.

Throughout the story map, we can see the story unfold effectively using Story Actions. In a section where urban growth was being discussed, Spencer focused on a city and used story action to show the rapid growth in population by adding layers and zooming out from the map on the main stage. The animation below shows how the population in Tokyo grew from 1834 until 2010.

Story Actions are a powerful tool for making your story maps interactive. These are embedded into the narrative text and are activated while users read the content. Think of them as hyperlinks, where upon clicking on a hyperlink, the main stage of your story map will change based on your settings.

Settings for Story Actions include:

Concrete Jungle also makes good use of the spyglass application template to create an interactive experience. Looking at the imagery alone, it looks as if everywhere in Tokyo is equally dense, but dragging the spyglass around the map, you can see the colour change for each neighbourhood – revealing where the denser neighbourhoods are. 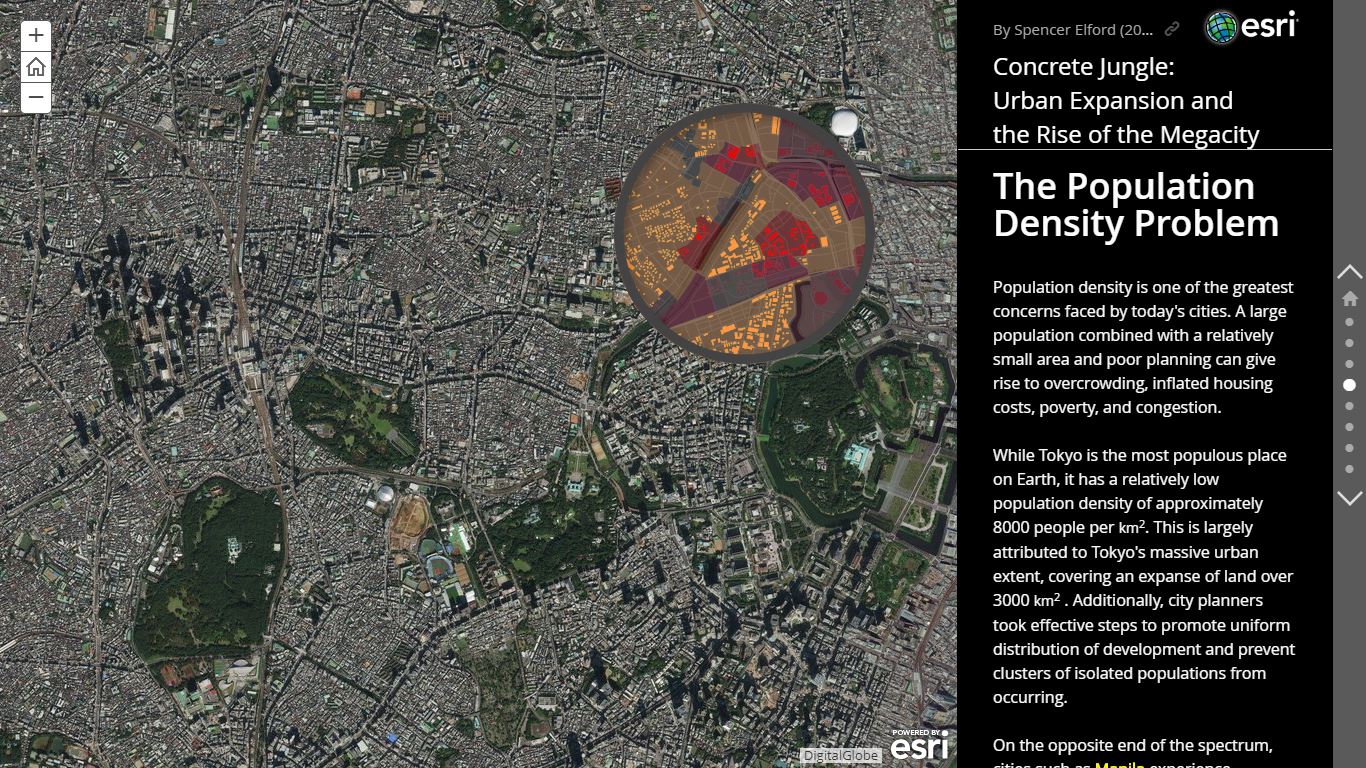 The Spyglass application allows users to visualize the difference between two maps or, in this case, two datasets.

All the effort Spencer put into making individual web applications and adding story actions to Concrete Jungle definitely paid off. As a user, I had a really positive experience going through the story map.

This might seem a lot of work, but carefully planning what you want in your narrative and outlining the interactive experience you want your readers to have with your data are the main bulk of the work. (To learn more about preparing an outline for your story map, read this blog post by Hannah Wilber).

Once you have the outline set in stone, find the data and build the web application. Although there are numerous web application templates to choose from in ArcGIS Online, each template is easy to use and does not require coding skills.

As Spencer shared, “I gained valuable experience in web application development while creating this story map. Not being a developer, I learned a lot about the components of web applications. I also gained confidence in GIS web development that has helped me move forward in my studies.”

If you are looking for creative ways to present your research or ideas, explore how to make a story map and browse through the different templates on ArcGIS Online to get started with making a web application.