February’s App of the Month – Caribou of the boreal – is a story map by the David Suzuki Foundation. It uses rich multimedia to illustrate how Caribou are threatened with extinction across Canada with 37 out of 52 boreal caribou ranges unlikely to survive unless action is taken to reduce disturbances to their habitats. By taking this cross-Canada tour, you’ll go deep inside the boreal forest to live the caribou’s experience and find out what you can do to protect this species’ critical habitat.

When you are given the option to learn about something or find out how something works, do you prefer to: (A) read about it in a document or article; (B) watch a video about it; or (C) look at a collection of photos? I think it’s fair to say that both options B and C would outperform option A.

For example, I recently needed to change the bulbs in the taillights of my car, so I googled it and found myself the first how-to video result and replaced the bulbs. I also consulted some online step-by-step picture tutorials, but ultimately, I went for the video because that was the quickest and most effective way to get the job done. Our App of the Month combines all three – text, video, photos and more.

In 2019, the David Suzuki Foundation ran a campaign to garner public support for the protection of woodland caribou. One of the objectives of the campaign was to bring awareness to the urgency of enforcing protection of this species and the habitat it lives in. To educate and engage readers on how to protect woodland caribou and encourage them to contact government representatives to lobby for additional protection and restoration measures, the Foundation decided to use classic Esri Story Maps.

As Willem Van Riet, spatial analyst at David Suzuki Foundation shared, “While our website offers information on the many ways people can support caribou and at-risk species protection, we felt the story map was the perfect vehicle to inspire people to take action.”

Using the Story Map Cascade template, the audience is presented with rich multimedia that visually capture the beauty of the woodland caribou and its habitat. The story then transitions into how human impact has immensely reduced this species’ population. The ability to combine maps with photos, video and narrative was key in illustrating how unrestored linear clearings such as seismic lines have exposed caribou to predators, resulting in a surge in calf mortality.

When asked why they used Esri technology, Willem described how their foundation already had licenses to use ArcGIS Online and wanted to present more of their work online. After attending the Esri Canada User Conference, he learn to use new ArcGIS technology and one of them was Story Maps. He saw the storytelling app as a means to broadcast the issues their foundation was working on.  He described the app to have given him “an online vehicle to galvanize support for causes we care about and serve our message to non-GIS users in a digestible and striking way.” 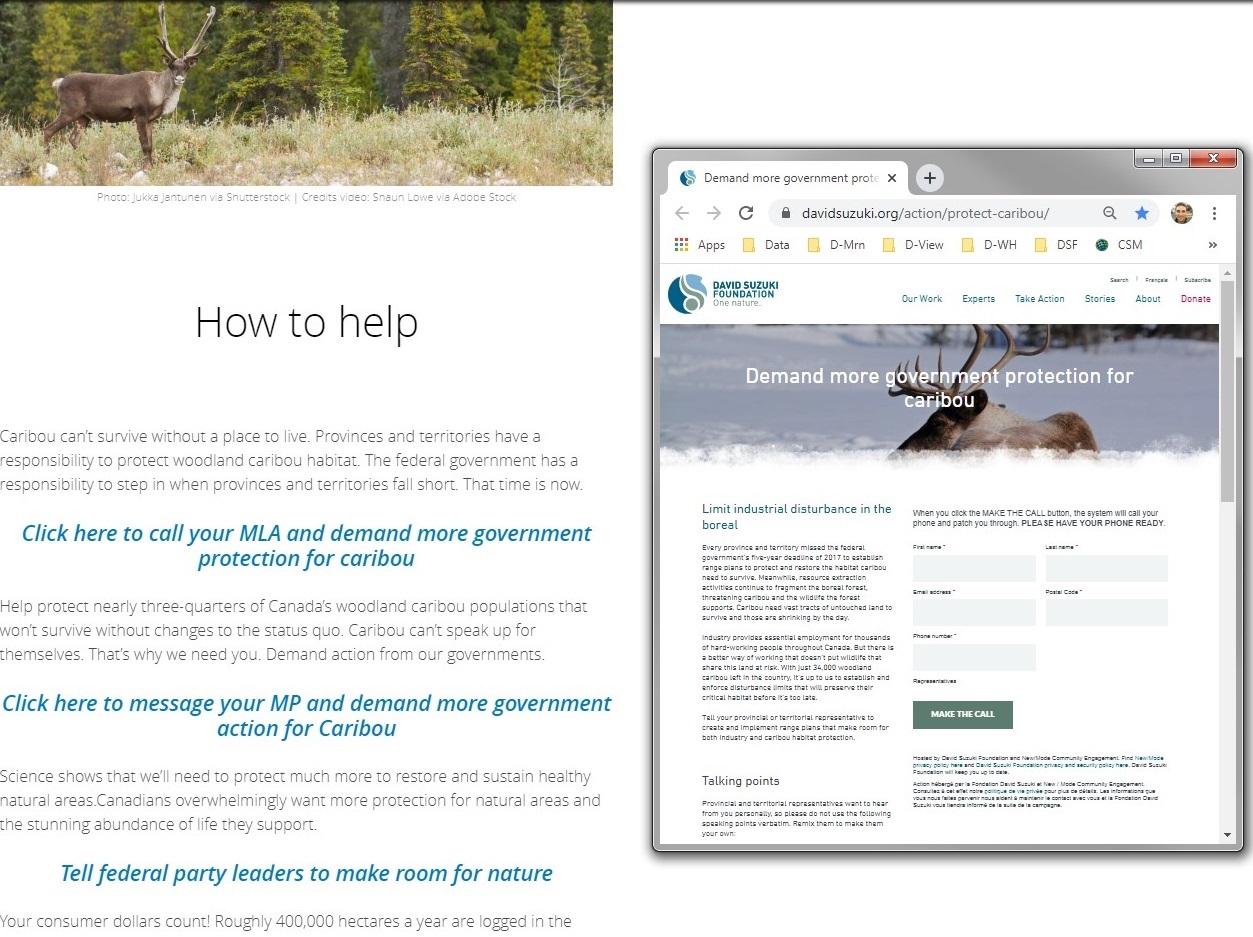 That is exactly the purpose of a story map, you can be doing all these cool mapping and spatial analysis, but what’s the point if you are not sharing it with others? Using story maps as an outlet to share your findings and opinions can bring great results. Since releasing their story map, the David Suzuki Foundation has gained a lot of positive feedback from the public as well as from media. A CBC journalist tweeted about it and Canada’s National Observer wrote an article on how this story was put together.

Although the team spent great lengths of time to put together the video and photos, the outcome was remarkable. Such rich media helped enrich the story. A word of advice from Willem, “We found Vimeo was the best way to link videos in the story map.”

Aside from the high-resolution videos and photos that we incorporated into the story map, they also added 3D scenes, which helped add a dynamic experience to the story. “I was immersed in the flythrough of the story and astounded to the extent of the industrial footprint in The Blueberry River First Nations traditional territory” said Willem. The cascade template allowed us to float a video of elders speaking on conditions in their territory which makes for compelling storytelling.

Lastly, let’s not ignore the beautiful maps in the story map, where the transition between segments was leveraged to show movement in a static map. This put an emphasis on the pressing issue of boreal forests cleared for industries to extract resources. 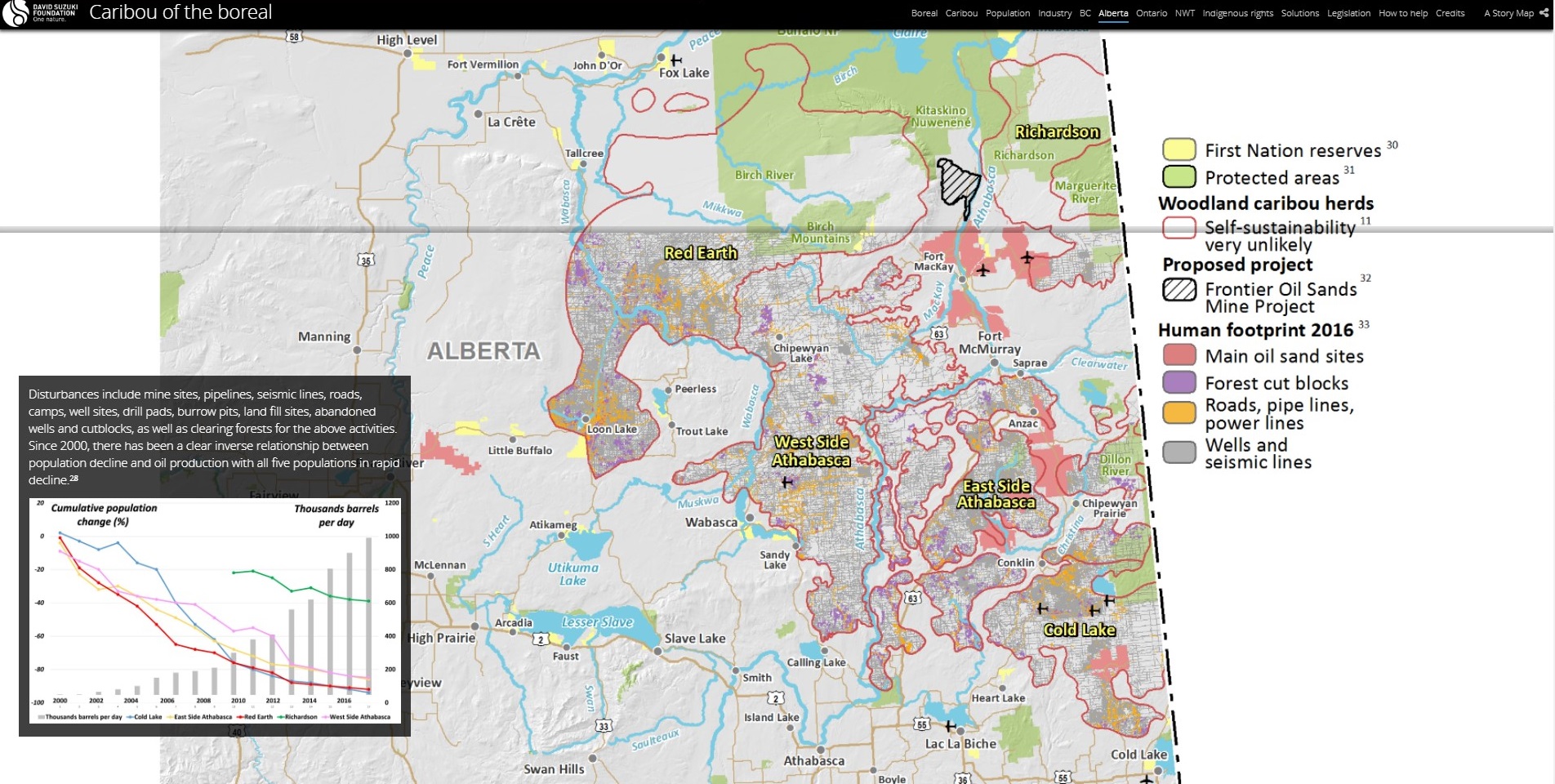 When asked what’s on the pipeline this year, Willem says they are preparing for their next campaign. He looks forward to incorporating the maps and multimedia they’ve created into the brand new ArcGIS StoryMaps and is especially excited about using the functionality to embed Twitter and Instagram posts in a story map.

Got an amazing story you want to share with the world? Start telling it with ArcGIS StoryMaps.