With challenges of housing supply and increasing cost of financing, a solution to ensure housing affordability has been to build homes on publicly-owned land. Esri Canada recently worked with the Infrastructure Institute at the School of Cities, University of Toronto, on a study to generate hypothetical development scenarios on the underutilized sites of six large private companies running retail operations. The outcome was stunning.

Canada’s housing crisis seems to be spiraling even more out of control in the post-pandemic recovery period. CMHC recently announced that an additional 3.5 million affordable housing units are needed by 2030 to restore housing affordability - a gigantic undertaking that isn’t achievable without dramatic changes to the way housing is currently delivered.

With challenges of supply and labour shortages in addition to the increasing cost of financing, one obvious solution to ensure affordability has been to build homes on publicly-owned land. This can be seen in the City of Toronto’s Housing Now program. However, what is often overlooked is the redevelopment potential of privately-owned land portfolios.

Esri Canada recently worked with the Infrastructure Institute at the School of Cities, University of Toronto, on a study to examine the potential of private land portfolios in Toronto to create more affordable housing. The study generated hypothetical development scenarios on the underutilized sites of six large private companies running retail operations. The outcome was stunning.

Sarah, I’m borrowing from the introduction of the study, Rethinking Retail Land Portfolios, and ask, “Why now? Why private land?”

Sarah: We’ve been in an affordable housing crisis in Canada for well over a decade now. Coming out of the pandemic, it’s obvious that cities need to take proactive responses to the delivery of housing and other critical social services. Many have started implementing new affordable housing strategies, but most have been limited to publicly-held lands. This includes the City of Toronto’s Housing Now program that intends to deliver 10,000 units with 3,700 as affordable rental. While this makes a lot of sense, public lands alone won't be enough to provide for all of the needed housing. Just the City of Toronto’s social housing waitlist alone has around 80,000 active applications.

One obvious solution is to look towards the private sector and, specifically, those property owners who own multiple large-scale sites. Many of these owners have already started redeveloping their underutilized retail sites into mixed-use retail and residential buildings. There is enormous development potential among large private landowners towards the creation of complete communities with affordable housing and key public services.

Was there a finding or study outcome that stood out for you?

Sarah: The most surprising outcome for me is the sheer amount of development that was generated, especially since our team purposely took a more conservative approach. We limited the number of sites that could support development by applying broad criteria that would eliminate sites, narrowing down to 65 sites from over 300 sites at the beginning. We also limited the use of high-density typologies, where mixed-use towers were allocated only to the downtown core. Even some of the sites that generated mid-rise buildings in the study already had active development proposals for significantly larger towers, for example, the adjacent property to the midrise generated at 656 Eglinton Ave has a proposal for a 32-storey mixed use condo.

Even with this conservative approach, it’s clear that the development potential for underutilized land is quite significant. Private landowners operating retail uses in Toronto are sitting on goldmines for development, and they provide a massive opportunity for affordable housing and other critical public services.

The study looked at land owned by six major commercial organizations. How were those companies selected?

Sarah: We wanted to demonstrate the enormous development potential among private landowners yet realized the study would become a very labour-intensive exercise if we considered all of the private landowners owning multiple retail sites. So only a handful of eligible companies with two broad key criteria were selected, these criteria being:

The sample of the six companies from the larger pool of eligible candidates was designed to be representative. Our point was to show that the development potential from even just a few private landowners was significant. We think that a selection of six other private landowners with the same criteria would also generate significant development, though it would vary in the units, greenspace, amenities, and other uses delivered.

Kendra, where did the data come from?

Kendra: All of the data were obtained or derived from open data sources – that is, freely available to the public. The addresses of the sites themselves were collected from the relevant store locator webpages, and geocoded to create a points layer of all current store locations. All planning-related data for Toronto including zoning, property boundaries, existing buildings, and neighbourhood improvement areas were available on the City’s open data website. Similarly, we made use of public ArcGIS Online layers on transit infrastructure and floodplains derived from the Toronto and Region Conservation Authority and Metrolinx and TTC data, respectively.

How was the analysis conducted?

Kendra: After mapping out the locations of these six major retailers across Toronto, we narrowed down the sites by eliminating those unsuitable for redevelopment. Specifically, stores that were located in a floodplain, in a strip mall, or that had existing development proposals were removed from the set of candidate sites. Locations that were part of existing mid- or high-rise buildings were also excluded as they don’t constitute underdeveloped land.

The next phase of the analysis involved defining build-out parameters for the remaining sites to dictate the shape of the building massing that represents a site’s redevelopment potential – based on things like zoning setbacks, maximum height, tiered stepbacks, and angular planes. The massings were generated in ArcGIS Urban software, allowing for 3D visualization of the potential build-out as well as differentiation of the residential, non-residential (retail, cultural, etc.), greenspace, and amenity spaces created. Summary metrics were also configured to summarize the area created for each space use type, and estimate the number of 1-, 2-, 3- and 4-bedroom residential units based on affordable unit target distributions. 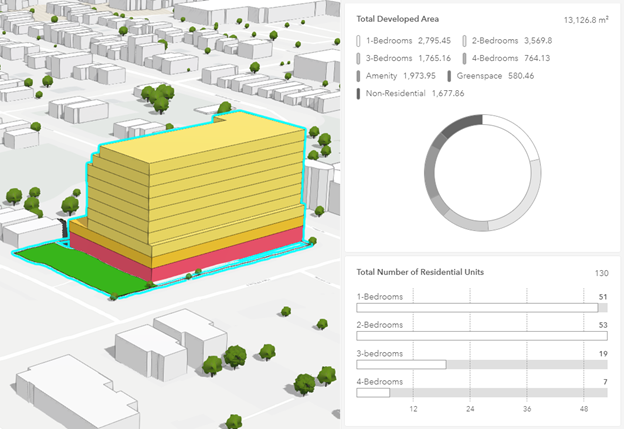 Finally, we identified sites with high development potential by assessing the sites’ suitability for redevelopment based on minimum Floor Space Index (FSI) and lot dimensions, maximum allowable height, mixed-use support, proximity to rapid transit, and whether it was located within a Neighbourhood Improvement Area. Locations that met a minimum of three of these criteria were considered high potential sites.

How did you handle zoning and by-laws in the analysis?

Kendra: Zoning boundaries, height overlays, and coverage overlays were available separately from the City of Toronto, so these were first joined to create a single consolidated zoning layer. However, zone-specific information like maximum heights, setbacks, and mixed-use allowance was not included in the dataset, so this needed to be manually extracted from the Zoning By-Law and appended to the data. In terms of the actual build-out in ArcGIS Urban, we assumed any redevelopment would entail rezoning the site to Commercial Residential (CR), so all build-out parameters follow CR standards and restrictions. Current zoning information was still required for identifying sites with high development potential, though, as properties that support the minimum ideal redevelopment criteria are more likely to be selected.

Does the study look at building footprints? How many more potential sites could be developed if you took in the parking area both surface and underground?

Sarah: We were more concerned with the property parcels and their shape and size than the building footprints. Many of the sites had abundant surface parking, which is one characteristic of what we considered as underutilized sites. Our rules for generating building forms had limits on the maximum building size but were also informed by the physical constraints of the parcel, including its depth, minimum setbacks, and angular planes from a property line (to follow some of the city’s urban design guidelines).

The study findings concluded that these sites had a development potential of 7.35 million m2 or 68,576 residential units from which affordable housing could be created, not to mention, close to 2 million m2 of green, amenity, and community spaces.

What are some factors to consider to close in on these goals?

Sarah: Something to consider is that these numbers were largely based on current development practices, meaning that the majority of the units generated were 1–2-bedroom units and amenity spaces were largely calculated based on zoning requirements. However, equally important to providing affordable units will be the provision of diverse housing types and ensuring adequate and accessible community and social services. In other words, it’s more important to consider how the redevelopment builds complete communities. While the numbers demonstrate a substantial level of development, it may be of more interest to build fewer overall units but with a higher percentage allocated towards 3+ bedroom units for families, missing middle typologies (i.e. duplexes, fourplexes, townhouses), or walk-up apartments that support walkability, affordability, and a neighbourhood’s social fabric. On the flip side, there could also be a rationale to build more development if that extra development generates revenue that can be invested back into public benefits.

Kendra, could you tell us a bit more about the display and visualization of the study?

Kendra: Beyond just metric summaries and general massing forms, we wanted to include a display that would help viewers to visualize the redevelopment potential at some of these sites, and how that development might best integrate with the surrounding environment. To accomplish this, we selected four of our high development potential sites and created more detailed 3D building models using rules in CityEngine. The models were textured and included architectural features such as doors, windows, balconies, awnings, and mechanical penthouses to provide a level of realism. Generative rules were also used to generate road and greenspace designs, while Esri and open source 3D asset models were added to the streetscape for further visual context. The four site designs were captured in images in our report, and included in an interactive 3D scene in the project’s StoryMap. 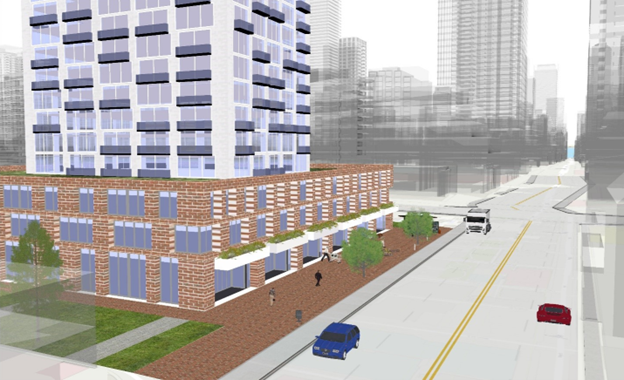 What types of planning aids could be provided to developers to help them reimagine and redevelop their lands?

Kendra: Planners and developers need comprehensive, interactive tools that can allow them to assess site suitability and quickly generate and visualize development potential based on existing allowances and restrictions. Additional capabilities for enhanced visualization are ideal, as the extra layer of context can help inform design decisions. Such tools should allow users and decision-makers to make quick assessments through straightforward summary indicators and more complex spatial analyses. In the case of this project, these visualization capabilities were supplied by three separate software applications that integrate well with one another (ArcGIS Pro, ArcGIS Urban, and ArcGIS CityEngine) and in combination serve to streamline the exploratory planning and development conceptualization process.

Is there an incentive for private property owners to contribute to Toronto’s housing situation? Are they doing it now?

Sarah: The City of Toronto already has programs and tools that offer the types of incentives that are appealing to the private sector. Some of them include accelerated development approvals, density bonuses, and financial incentives, which are described in more detail in the report. But even with the existing incentives, there are other options that could better encourage the building of affordable housing on private land portfolios.

For example, accelerating development approvals is the main incentive from the City’s Concept 2 Keys program, which offers an expedited review process for applications with affordable housing. It’s now a permanent program but there is an opportunity to rethink the criteria that make a project eligible for fast-tracking, specifically to encourage private landowners with multiple sites. This could include considering affordable housing spread across multiple sites for instance.

Sarah, how could examining the use of private land complement the programs already in place for public owned properties?

The Infrastructure Institute is a training, advisory and interdisciplinary research hub at the University of Toronto’s School of Cities that works to build local and global expertise in infrastructure planning, decision-making, and delivery.