What do you think of when you hear the word “library”? Row upon row of shelves filled with books on every subject imaginable? Clusters of study carrels with students hunched over their notebooks or laptops? A central hub where information is gathered and shared by a dedicated group of people with a love of knowledge and learning? University libraries are all of these things – and they are also often the best places on campus where students and researchers can turn to for help with GIS.

When talking about GIS Days hosted by Western University Libraries last November, Liz Sutherland is quick to point out that it was a group effort and to credit her Ontario Council of University Libraries (OCUL) colleagues with helping make the week-long event a success by volunteering to help moderate sessions, communicate with participants, and provide support with the technical aspects of running a virtual event. Building on the success of the first virtual GIS Days event in 2020, the organizers wanted to offer an event that was open and accessible to everyone, and that wasn’t weighed down by being labelled a “conference.” While most of the presenters were located in southwestern Ontario, there were several from other parts of Canada, the U.S., and other parts of the world. Participants were also able to attend from around the world – a definite advantage for the virtual format! Recordings from the sessions are available to view online. 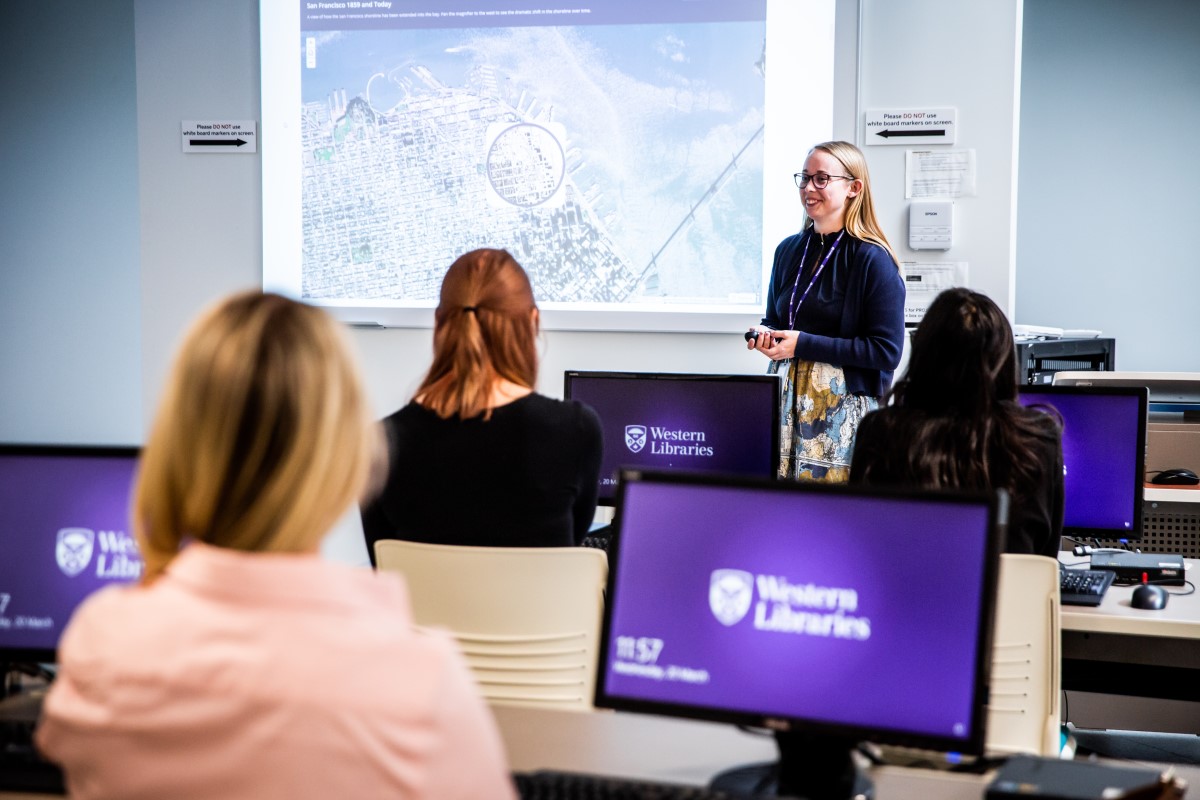 Organizing such events is just one part of Liz’s job as a GIS Specialist in the Map & Data Centre at Western University Libraries. As I spoke with her, and later with Jen Strang, a GIS Analyst in the GIS Centre at Dalhousie University Libraries, and Barb Znamirowski, Head of the Maps, Data & Government Information Centre (MaDGIC) at Trent University Library and Archives, I realized how similar their roles are to the role of a Higher Education Specialist at Esri Canada. There is, however, one major difference: they support the use of GIS at a single university, whereas at Esri Canada we support its use at colleges and universities across Canada! Although the job titles and specific responsibilities vary, library staff with knowledge of GIS run workshops, give guest lectures, manage licenses, provide technical support, offer advice, collaborate on research, and promote GIS to the university community.

The library may not be the first place people think of when they are looking for help with technology but there are many advantages to housing a GIS Centre in the library. As Jen explained, “it’s not owned by any one department, so everyone feels comfortable using it.” Liz calls the library an information-gathering place and “the glue that helps connect everything” so it makes sense to include geographic information and the tools to work with geographic information in that same place.

Barb started working at MaDGIC more than three decades ago. At the time, it was only MaGIC; she helped with the initiative at the Centre to include different types of data as part of their services and make them accessible. GIS and data visualization services are more recent additions. The team Barb works with has a diverse and complementary set of skills. Some of them have degrees in library sciences, others are GIS specialists, but all of them are motivated to make information accessible. Barb herself has a master’s degree in library sciences and many other qualifications. In addition to continual formal education and training, she says “there isn’t a day when [she’s] not challenged to learn something new.” In her interactions with students, she emphasizes the importance of proper research processes and the research lifecycle, including managing and preserving data, rather than focusing just on the technology. 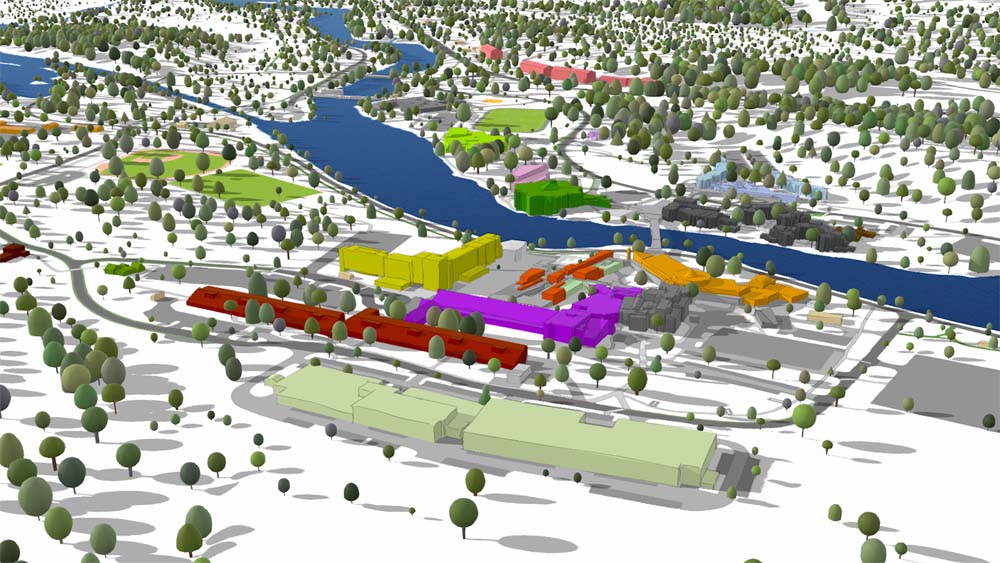 Geoff Andrews, one of the member’s of the MaDGIC team at Trent University, created this 3D scene of the campus in Peterborough, Ont., using a lidar-derived point cloud and lidar-derived terrain model from the Ontario Ministry of Natural Resources and Forestry.

In comparison, Liz is a relative newcomer to the library system, having only been working at Western Libraries since a couple of years before the pandemic. For her, it’s a dream job: opportunities to work with researchers and instructors across campus, in virtually any discipline, and to get involved in projects to varying degrees – without having to write any literature reviews! Among her favourite workshops to run is an introduction to story maps because it attracts people without GIS backgrounds and she gets to see their excitement in building their first map. She often provides support for projects outside the traditional GIS domains, such as one with the Department of English and Writing Studies that involves extracting information from early modern era texts that can be used to map weather extremes. Of course, she also tries to keep in touch with the geography and earth sciences departments to make sure they are aware of all the latest tools that are available.

Part of the project with the Department of English and Writing Studies at Western University involved creating a dashboard for users to explore the weather data extracted from early modern texts.

Jen echoes Barb’s and Liz’s positive comments when talking about her job. She recently received her 15-year award at Dalhousie University and still finds that she never knows what will walk through the door (literally or figuratively) on any given day. Sometimes the questions she gets asked are basic, sometimes they are advanced, and sometimes they are somewhere in between. Jen provides support for the core GIS courses at Dalhousie and is directly involved with a project-based course that is a program requirement for the GIS certificate. She also helps run the “Lunchless Learn” series, which is a set of four hands-on tutorials (offered virtually) to introduce GIS to new users and raise awareness of how it can be used. A key part of her role is “interpreting what users actually want to do, which isn’t necessarily what they are asking for” and managing their expectations when it comes to what they’ll be able to achieve.

On top of regular GIS support, Liz, Barb, and Jen, and their GIS colleagues at other universities, have had the difficult task of helping their communities transition from ArcMap to ArcGIS Pro. The need for remote learning options in the past two years may have helped speed up the transition, since Named User licensing and the ability to download ArcGIS Pro from ArcGIS Online makes the process of installing and authorizing the software on their own computer a lot simpler for students than is the case with ArcMap. All of the core GIS courses at Trent and Dalhousie have moved to ArcGIS Pro, although there may be some non-core courses where ArcMap is still used and some researchers who haven’t yet been able to transition their projects from ArcMap. All three, Trent, Dalhousie and Western, are looking at implementing Single Sign On to simplify some aspects of ArcGIS Online account management. In the meantime, access to ArcGIS is only a simple request to the GIS centre away.

If you aren’t yet convinced of the important role map librarians and GIS specialists in university libraries play in supporting the use of GIS, check out the Western Libraries Geospatial Hub to see more examples. If you are a student or researcher at Western University, use the tools at the bottom of the hub to request a consultation with Liz and get answers to all your GIS questions. If you are a student or researcher at another university, check out your library’s website to see what GIS services they may offer.

Are you a map librarian or a GIS specialist in a university library in Canada? We’re building a story map to showcase the important work that you do. Complete this survey to have your story added!