Dr. Liliana Perez from Montreal, Quebec is April’s GIS Ambassador of the month. Discover how this Associate Geography Professor from the Université de Montréal has supported her son’s learning through a citizen science project, and what’s she done to support local schools in the past 2 years.

Meet this month’s GIS Ambassador Dr. Liliana Perez, an Associate Geography Professor from the Université de Montréal who holds broad research experience in geographical information science and geospatial analysis and complex modelling. She received her PhD in Geography with a specialization in modelling complex systems from Simon Fraser University in 2011.

Liliana has been supporting her son Nicholas’ learning through a citizen science project while on sabbatical earlier this year. Many GIS Ambassadors begin by supporting a friend or family member who’s a K-12 teacher or student.

We thought this is a relevant story, as many of us are now wearing different hats at home, including providing more support for our children’s at-home learning. In this post, we will also include the work Liliana has done at local elementary schools in the past couple of years.

Liliana in Chile, January 2020. “I believe the role of a GIS Ambassador is one of the most rewarding experiences I’ve had, so far. Being a university professor, I see how some students at that level struggle at understanding concepts that for many of us could seem very simple. Introducing geographic concepts at a very early age in school with the help of GIS will allow students to develop the geographic skills that are key to understanding Earth's physical and human patterns and processes.”

While on a field trip to the Chilean Patagonia as part of her sabbatical in December 2019 and January 2020, Liliana took the opportunity to do some ambassadorial work by getting her seven-year-old son Nicholas involved in a citizen science project through the Université de Montréal and the Universidad de Magallanes. Close to Punta Arenas, a city in the Chilean Patagonia region, Liliana and her son collected data on marine mammals, also known as cetaceans and tested the implementation of a survey created using Survey123 for ArcGIS that children from schools in Punta Arenas, tourists and the general public could contribute to.

The survey asks respondents to document marine mammal sightings in the area, starting with the type of species of cetaceans. It also asks group size, “dynamics of sighting” that includes if the sighting is an adult, an adult with a calf, a juvenile, etc. Other questions include, behavior, location, distance from the coast and other information that would be important factors in monitoring marine mammals. 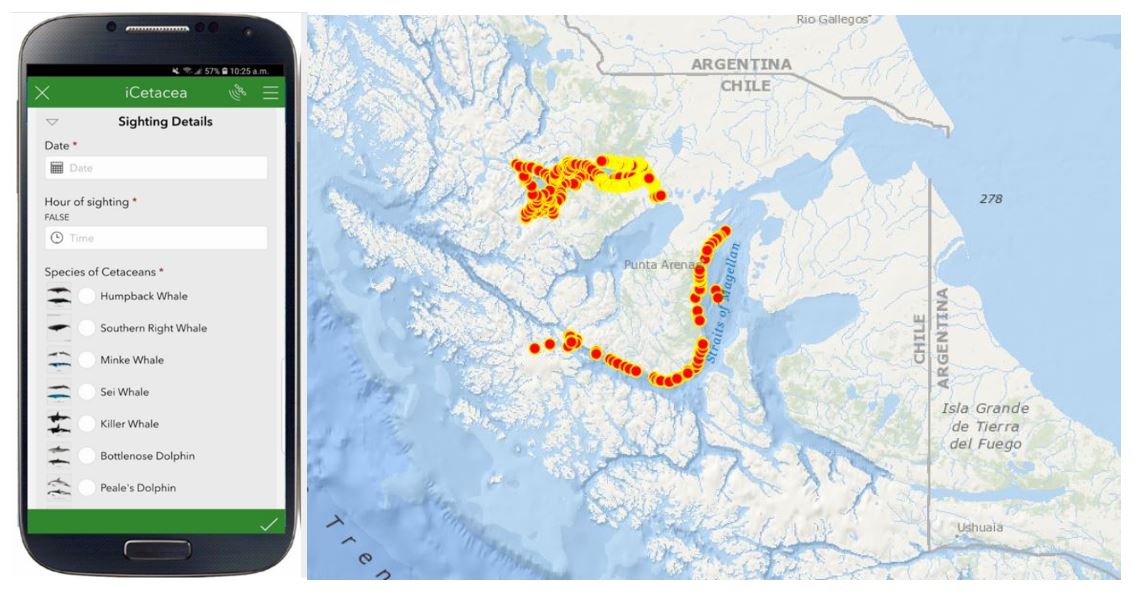 During the data collection, drones were used to identify Chilean and Peale Dolphins, as well as Humpback Whales. Liliana was interested in following the growth of specific individuals that have been followed by Chilean researchers for over 20 years and to study the possible impact that marine traffic and glacier melting can have during their feeding period during the summer.

Using a Phantom 4 from DJI, they were able to track a moving subject without a separate GPS tracker. The drone locks on the subject, like a whale or dolphin and can start tracking it automatically from a safe distance. 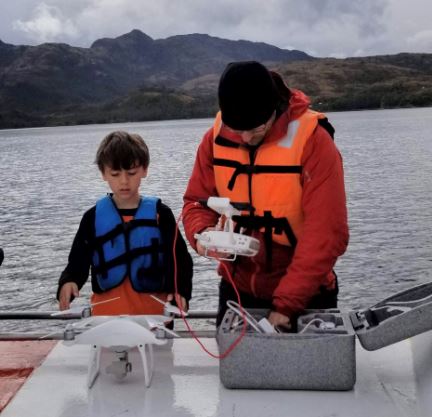 Nicholas, a citizen scientist preparing the drone to fly over the Humpback Whales on the Francisco Coloane Coastal and Marine Protected Area, southern Chile's Magallanes and Chilean Antarctica Region with Simon Demers, a MSc. Candidate from the Geography Department at the Université de Montréal.

Through this activity, Nicholas learned about the importance of conservation and how citizen science can support the work scientists and researchers are doing in understanding and learning about cetacean species in Chile. He also gained some hands-on learning on how spatial technology can be applied in the real world. 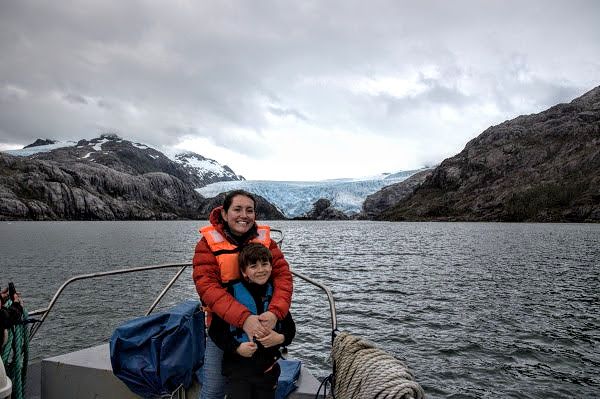 Liliana with her son Nicholas in Chile, January 2020. “I liked a lot working with my mom and Simon in Chile, I learned to see dolphins from the coast and on the boat, and to enter data in the app on my mom’s phone. After a week I was the one who spotted dolphins and whales before mom and Simon. I love dolphins and I think kids from the schools in Punta Arena can help my mom in her project and learn about them.”

Sharing the work with others

Upon returning to Montreal, Liliana made a visit to her son’s grade two class at École Saint-Germain d’Outremont to present La Patagonie Chilienne: La science citoyenne pour la conservation, a story map that highlights the citizen science project they worked on while she was away in Chile.  This resource includes information, photos and videos about the project, as well as how drones were used to follow marine mammals. Students were able to explore all the data collected during the last field season using a web map included. The students were invited to explore the iCetacea survey that was developed for the project.

The feedback from the teacher and the students was positive. The students enjoyed the drone footage and were impressed by how far Montreal is from Punta Arenas.

“The pictures and videos are amazing! We have watched them a few times and interacted with the map. Our favorite one is the one with the dolphins and the boat. Thank you very much for your time and for sharing this experience with me and the class.” - Mrs. Marie-Danielle Tremblay, Teacher.

During the 2017-2018 school year, Liliana worked on a family history mapping project with her son’s kindergarten class at École Lajoie.  The idea came from “Diversity and Creativity” a theme from the school that sparked Liliana to get involved. Working with the kindergarten teacher Mrs. Nathalie Gelinas, students were tasked with finding out information about their families.

Liliana enjoyed working with the students and shared her experience with us. “Parents and kids took a great interest in the activity. Once we gathered all the information, we asked the kids to draw themselves in order to use their drawing as a profile picture in our Story Map called La classe de Nathalie: les élèves du monde – highlighting each students’ family history and the places they were from. After the exercise, we all learned that only five kids in the class were born in Montreal, QC, another one was born in British Columbia and rest of class had moved to Canada from different countries in Europe and Africa.”

The next project for Liliana is to create an educational app to encourage people to get outdoors and to allow teachers and students to explore and learn about the biodiversity on the mountain “Le Mont Royal.” The hope is that this app would contribute information about the animal species that can be found there and can be used by the City of Montreal.

Liliana, keep up the inspiring work you are doing to promote the importance of GIS to K-12 students and teachers!

If you are interested in learning more about Liliana’s projects, feel free to contact us at k12@esri.ca and we will connect you.

Read other inspiring GIS Ambassador stories and connect with one today.