Canada's second largest port uses the Community Map of Canada basemap for some of its operations.

This post was written using content from a webinar that was presented in French on February 15 on how to set up the Community Map of Canada’s basemap for offline use. We were able to rely on Sanit Sananikone, GIS supervisor, to present his team’s work on how they use the community basemap. You can view the recording here (in French).

To begin, here are some additions to the Community Map of Canada vector basemap. We have recently completed the integration of the AQRéseau+ road network layer from Adresses Québec into the basemap. This was added for territories in which the corresponding municipal entity is not a contributor to the Community Map of Canada, or if a contributing organization does not have, therefore does not contribute a road network layer. On the other hand, the road network provided by a contributing city or RCM will be prioritized and therefore displayed. As you may have already noticed, the basemap now contains a representation of buildings for a good portion of Québec. From several sources of data that were aggregated, including data from the federal government and provincial authorities, we created this layer which is now displayed in the basemap. Again, a layer of building footprints provided by a city, an RCM, a port/airport authority or a university will be prioritized to be displayed in the basemap. 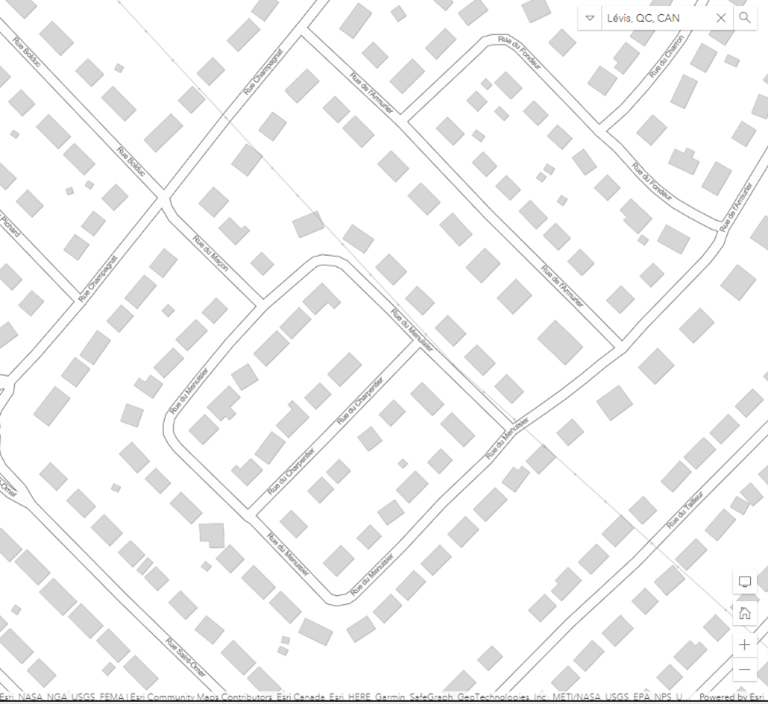 On the left, the layer of buildings assembled by our team, added to the community basemap, here an example from the City of Lévis

Geomatic work at the Port of Montréal

The Port of Montréal is the second largest in Canada. The organization responsible for managing the port is the Montreal Port Authority (MPA), which has approximately 250 employees. The port's facilities are mainly on the island of Montréal, but it has planned an expansion in the area of Contrecœur. As in the case for a city or a municipality, the port authority must ensure the proper functioning of the various infrastructures within its territory: among others, the aqueducts, the sewers, the building inventory, the electrical, telecommunications and rail networks, and of course all the deals with the the maintenance of wharves. It is of national interest to know the state of field work for these infrastructures. The work carried out by the team allows the port to not only have an accurate portrayal of the status of the various infrastructures, but also to know their exact location. If the entire sector included on Montréal Island is covered by a WiFi network, it is quite different for the area subject to expansion and located in Contrecœur. Offline field work is therefore of national interest here. 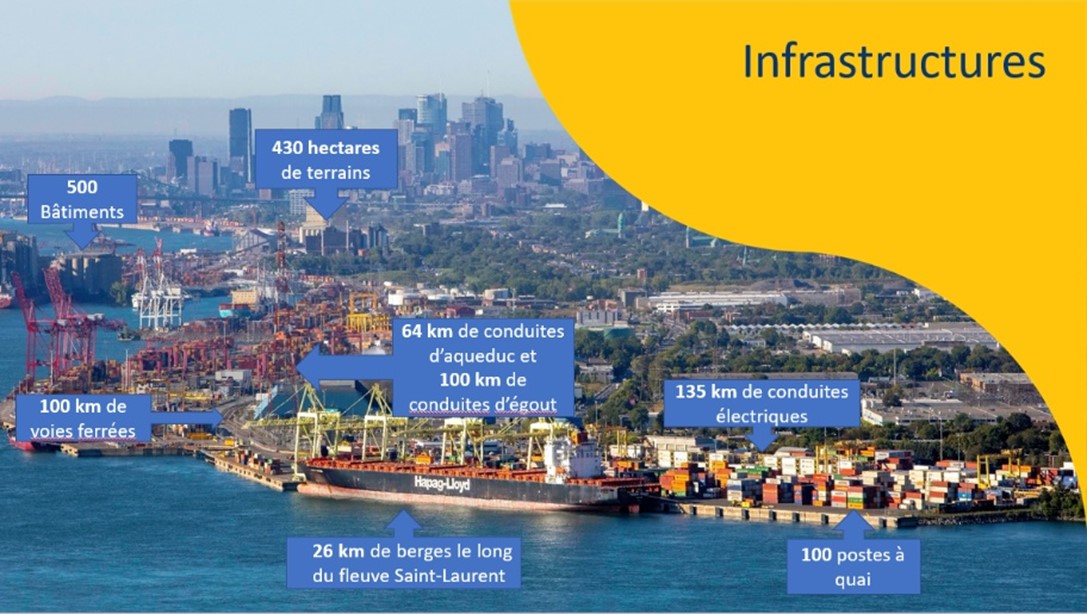 Different infrastructures at Port of Montréal

As mentioned earlier, the Community Map of Canada can now be used offline. In other words, you now have the option to bring the basemap with you when the Internet connection is limited or absent. Other organizations also prefer to work offline to save on roaming charges. The port's geomatics team plans to use the basemap to inspect the condition of the various Port of Montréal infrastructures, particularly the infrastructures related to the wharfs. Think of caissons, these surmounted concrete platforms that are used especially for the transshipment of various goods; box keys, which connect two boxes; or bollards, which are used to moor ships. The Montréal Port Authority (MPA) decided to also add its building footprints and its road and rail networks to the community basemap in order to have a reliable and accurate basemap, both for field work and, as we will see, for communication with its users. The geographical landmarks added to the basemap will help them in their data collection in offline mode in Contrecœur and in online mode on Montréal Island. 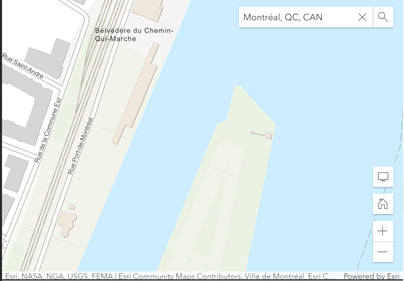 Buildings, street names and railway network contributed to the Community Map of Canada by the MPA

Communication with the users

Many organizations use the Port of Montréal facilities; they must therefore be well informed about the operation of the port. Whether via the PORTail du camionnage (Trucking Portal) to find out about port access traffic or from the Port of Montréal map to find out where its services are located, the Port Authority provides this crucial information. The geomatics team currently uses an open source basemap as well as a paid map for these communication tools. However, these basemaps do not meet their data or cost control needs. The Community Map of Canada makes it possible to meet both of these needs. First of all, it is fed by official sources, in other words, by organizations that act as authorities in terms of data management in their territory. Think of the federal government, provincial ministries, municipal entities, universities as well as port/airport authorities. We consider that these are the organizations that best know the reality on the ground. Updates on the map are not limited. These are done on a daily basis and two new versions of the map are published per week. Then, there are no fees associated with participating in the Community Map of Canada.

Lastly, the work of the MPA’s geomatics team allows decision-makers to better target the investments to be made in the Port of Montréal’s infrastructures in order to limit service interruptions. Using GIS is therefore essential to the smooth running of port operations. 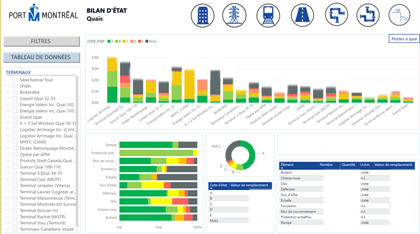 Example of a dashboard where the geomatics team contributes.

If you have any questions related to what you have just read, do not hesitate to contact us at communitymap@esri.ca.

This post was written in French by Frédéric Blouin-Michaud and can be viewed here.