Canada is a large northern country and thus displaying the geography of Canada on a flat paper map or computer screen may be problematic. In a spatial data infrastructure (SDI), when users combine disparate geospatial data collected, stored and published in a variety of coordinate systems, they need to be careful that the map being displayed is geometrically correct with minimal distortion. Also, there can be slight geometric misregistration problems if the GIS practitioner isn’t aware of potential geometry issues. Read this blog post to find out what to look for in terms of geo-registering data from various sources that are provided in different coordinate systems.

As many of you may be aware, all softcopy and hardcopy maps that depict the Canadian landmass do so in a somewhat distorted fashion. Canada, because of its geographic position on earth and other factors, is very susceptible to map distortions and these are described in my blog post “Web map projections: How to reduce distortions”. While there are workarounds to this, many users just live with this distortion. 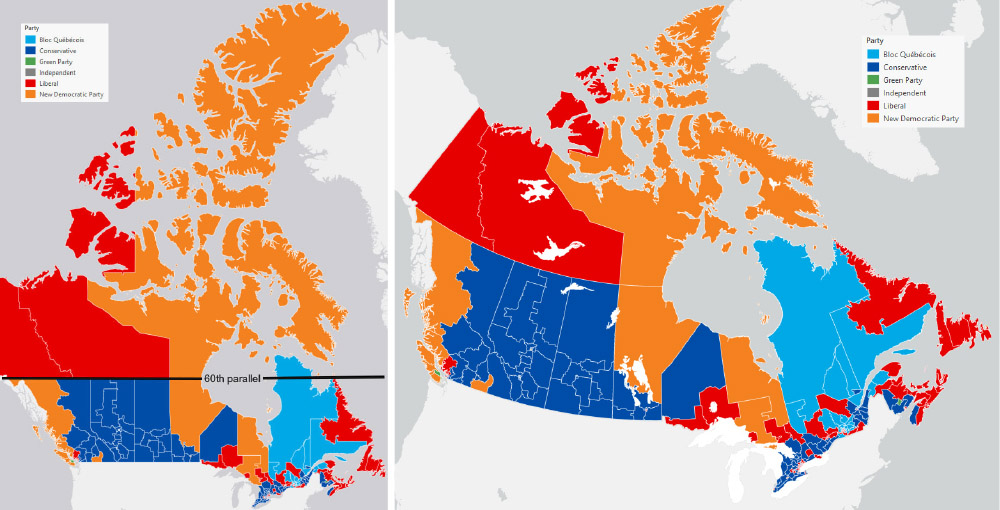 Here are examples from an article about the 2019 Canadian federal election results displayed by riding. The map on the left is displayed using the Web Mercator projection, and the map on the right uses the Canada Albers Equal Area Conic projection.

While the earth’s shape is relatively round, it’s not a perfect sphere and is often mathematically modelled as a spheroid. A datum is the way of modelling the position of points on the earth spheroid model relative to the center of the earth.  A popular datum in use in Canada is WGS-84, which defines points on the earth’s surface. Thus WGS-84 is a type of coordinate reference system (CRS). 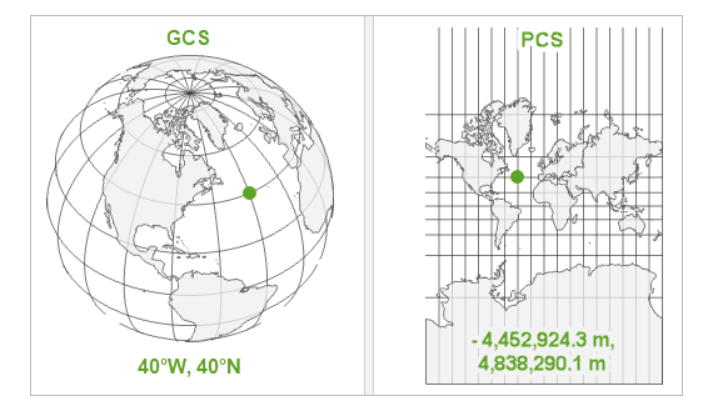 However, in an SDI, when integrating disparate data from different sources provided in different coordinate systems, users should be careful. While ArcGIS handles the coordinate conversions automatically, this may not be the case in an SDI if the data coordinate system is not properly specified in the data.

So, if you bring disparate geospatial data layers into your ArcGIS system from an SDI, take a few moments to check the geometric registration of the various data layers on the map. In most cases, the layers will align correctly and automatically in ArcGIS. But if not, the most likely reason for misalignment is that the GCS or PCS defined in the data layer is incorrect and needs to be repaired.

GIS, mapping and SDI interchange is improving over time as users demand better map geometry, registration and accuracy. In an SDI, it’s important to make sure that the coordinate reference system and geospatial data that you are providing is correctly specified.