You spend a lot of time and effort creating and deploying web maps, but don't forget about the importance of your organization's portal. Esri Canada technical solutions specialist Nathan Enge offers tips on improving the appearance and usability of your portal in part one of this interview.

So you’ve created a portal using ArcGIS Online or Portal for ArcGIS. You’ve been busy assigning identities, organizing people in groups and creating maps and apps that have made your colleagues more productive and efficient. But in your heart of hearts, you know the look and feel of your portal home page could be better. It’s a bit too out-of-the-box looking. What can you do to change this? 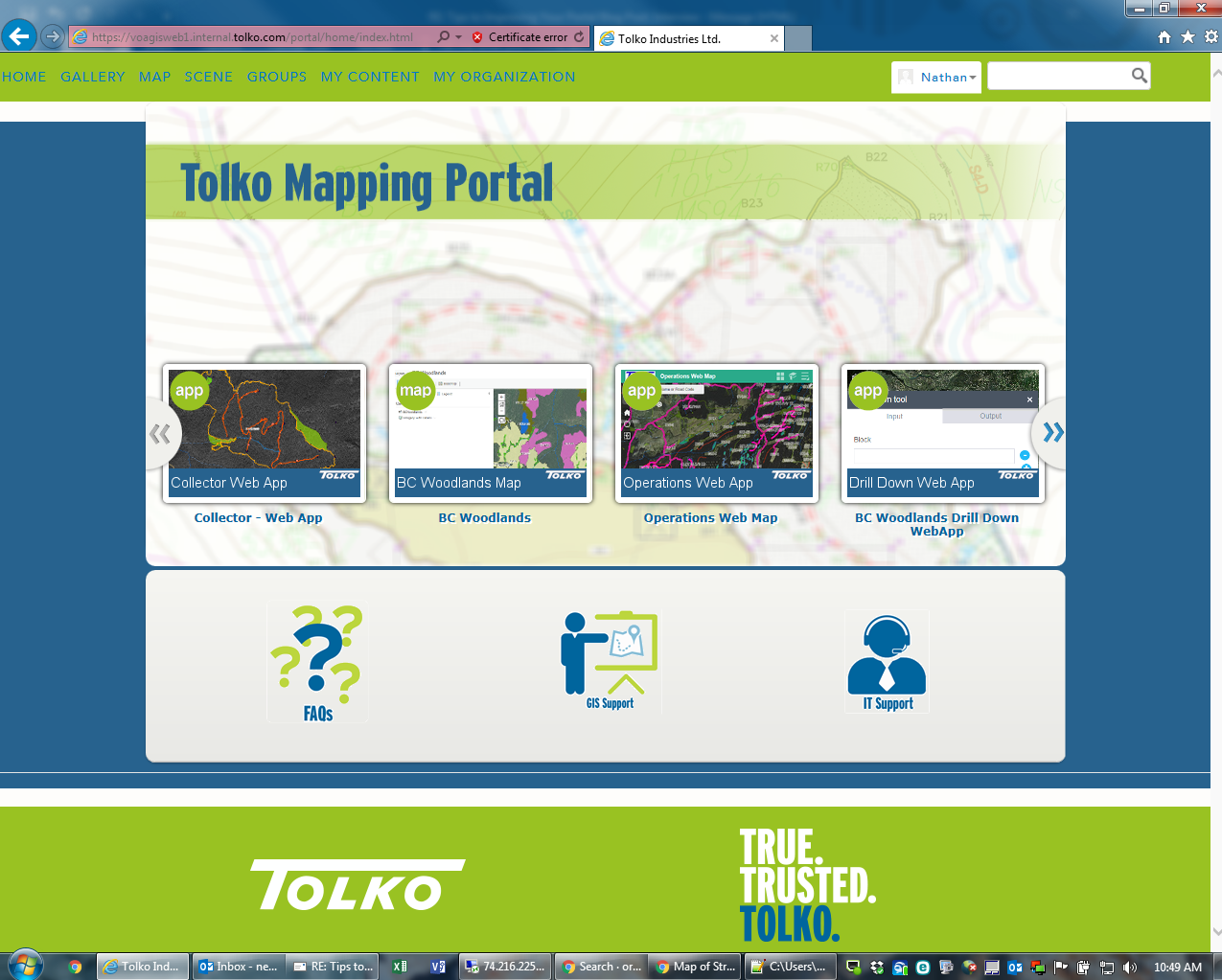 Learn how Team Pac-Map created the portal and how you can apply their tips and tricks to improving your organization’s portal in Part One of this interview series with Nathan.

AB: What inspired you to choose the concept of customizing a portal as your project for Tech Trek Idol 2016?
NE: Dan and I work in partnership on all sorts of projects. Dan’s time is focused more on functionality, and mine is spent working with people to make sure what we develop is useful and addresses their needs. Lately, Dan and I have noticed that many of the ArcGIS solution templates that Esri is designing are for mobile, browsers and all sorts of platforms, and they all follow UI and UX principles. What we find strange is that Portal for ArcGIS, which is really just another app, doesn’t receive the same kind of attention as the other apps, and we noticed that UI and UX principles are often neglected. So we thought this would be a perfect project for a couple reasons. We’ve both worked on projects like this where the UI was almost as important as the content that’s being delivered. And, in the end, all the things we’ve done to create the new portal for Tolko can be applied whether you’re using ArcGIS Online or Portal for ArcGIS.

AB: You mentioned you work on projects where UI was prioritized as the most important. Why would this be the case?
NE: Because GIS users already know GIS. On specific projects, those aren’t the users we were trying to reach. We were trying to reach the non-traditional GIS users who are using the apps that GIS people are making. Just like subject matter expert in any field, GIS professionals tend to make assumptions without keeping the end user in mind. We can’t assume people know what “zoom box” or “identify button” does.

Our idea is built on the premise that the functionality of portals should be usable and useful, and it also recognizes the non-traditional GIS users’ portal experience. That’s all about giving as much information as you can in a short amount of time. We want to provide as much impactful information on the opening web page as possible.

AB: In your opinion, what are some of the important characteristics of an effective portal?
NE: You really need to be in tune with the user’s comfort level and perception when they visit a portal. It needs to establish trust with users, so that means integrating corporate branding into the portal. If they’re looking at an app and it doesn’t appear as though that app belongs to the company, then they’ll think it’s not authoritative, and you’ve most likely lost them. Another important aspect is ensuring the longevity of the portal design with HTML and CSS code so that long after the consultants and developers are gone, the organization can continue using it. For example, if their corporate branding changes, it can be easy to update.

Nathan recommends employing code that makes updating a portal easier. Above, editing a banner in ArcGIS Online allows you to use pre-configured graphics or your own HTML code.

Another big thing was clarity. You need to keep the front page simple. On the redesigned Tolko site for example, there are three big buttons for help: one describes what the portal is, another provides GIS help and a third connects people with IT help. That’s it. The banner also featured items that we felt were going to be used most often.

AB: What are some of the incorrect assumptions that people have about portal design?
NE: One is that non-GIS professionals understand GIS. GIS professionals shouldn’t assume that people know what a web map is or does. Another is that non-GIS people will click more than three times. They generally won’t. Users will give up if it takes too many clicks for them to find what they need.

GIS professionals are unique because they have to approach what they do with both their right and left brains. A big part of cartographic design is making maps look good and conveying a certain message, so we’re just bringing that cartographic design mentality into the next evolution of GIS, which is web GIS and portal design.