What's new in the Canadian geomatics sector?  How does the new Scene with Inset Map 3D app template support 3D web mapping? How can you build compelling globe animations for story maps? See what’s happening in Canada and globally in the world of Spatial Data Infrastructure (SDI) through this collection of the latest and most significant SDI news, data, products and events this month.

The Geomatics Atlantic 2018 conference will be held in Halifax on November 14-15, 2018 at Lord Nelson. This year’s theme is Oceans of Data and will focus on exploring innovation, cutting-edge research and development, and the future of geomatics in the marine environment. The term geomatics represents a sector and technology that uses data collected by many different groups and connects many different sectors.

NASA has just launched a pilot program to evaluate how commercial small-satellite constellations could supplement the observations of Earth science missions with Earth science data. The NASA awarded the contract for purchasing the private earth observation data to three organizations: DigitalGlobe, SPIRE and Planet. The agency's observations of Earth's complex natural environment are critical to understanding how our planet's natural resources and climate are changing now and could change in the future.

The European Data Portal has catalogued hundreds of use cases from both publishers and re-users of Open Data. These searchable and filterable use cases have been collected to showcase the benefits of Open Data and the interesting European stories resulting from its use.

The entire global Arctic DEM has been re-mosaicked to 2-metre resolution and covers just over 10 per cent of the planet. With over 260,000 total 2-metre time-stamped DEMs that amount to nearly 160 million km² and 200 TB, the Arctic is now covered an average of eight times by 2-metre elevation data. A significant amount of Canadian DEM data is also available now.

Esri’s 2018 demographic data update from Environics Analytics incorporates the new 2016 Census data as its base. While most of the themes present in prior years are still available, some themes are no longer available; besides, new themes have also been added. The 2018 Canada demographics data will be released in two phases.

The Ministry of Citizens Services has published data and resources link on its DataBC portal offering data connection services that allow users to view thousands of data layers from the B.C. Geographic Warehouse (BCGW) in desktop geospatial software or via web-based map applications.  These connection services deliver current data directly from the BCGW so that web mapping application users can work with the latest data available.

With the latest release, Esri vector basemaps have been updated with map style improvements and added features, increased number of localized maps and a new creative style. Esri has also added new HERE data as well as data from the Community Maps program to improve the basemaps.

How to build compelling globe animations for story maps

Data visualization is key to sharing your data. For example, a spinning, global view of the Earth presents an impressive overview of your data. Not only does it put your story into a planetary perspective, but it’s also a great way to capture a reader’s attention. Learn more about these two easy ways to create animated spinning globes in ArcGIS Online and ArcGIS Pro. 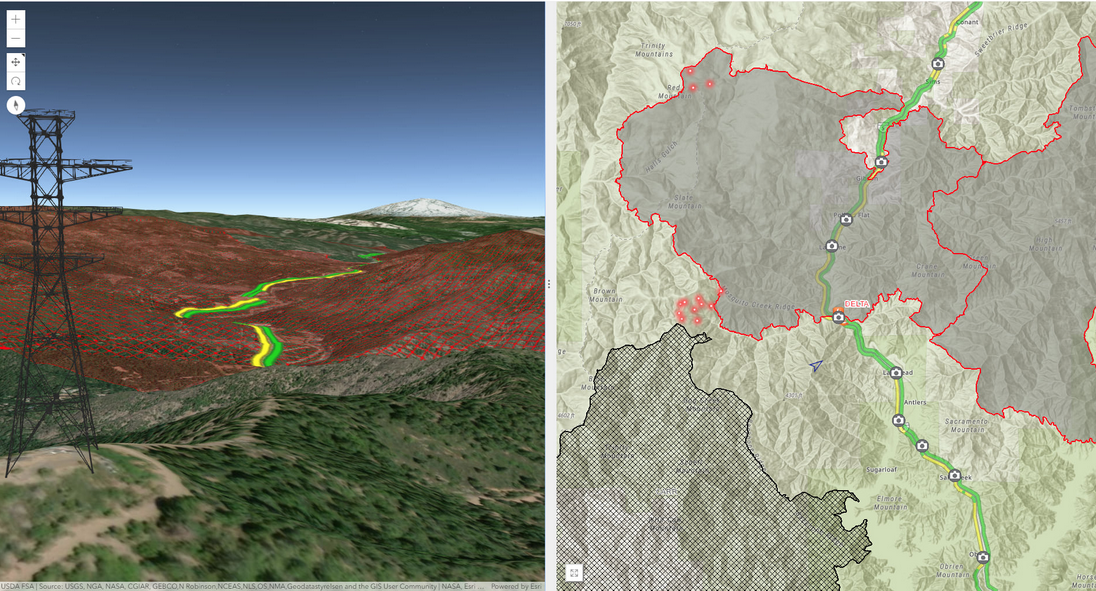 New technologies and experiences are changing the way people and organizations contextualize and understand problems. 3D GIS has also evolved to a point where users can trust authoring their authoritative data within the context of 3D scenes. Now, there’s a new 3D app template that makes introducing 3D to your organization easier!  The new Scene with Inset Map 3D app template provides a bridge between 2D and 3D web mapping by embedding a web map into an inset of a scene.

Keeping in view the significance of security and privacy considerations for technology products and services, Esri has released an overview of the assurance measures which the organization incorporates. It includes governance, standards alignment, assessments/tools, vulnerability/incident management, and guidelines.