Learn more about the release of ArcGIS 10.5, the latest apps and more in the January SDI Snapshot.

Here’s a look at what’s happening in Canada and globally in the world of spatial data infrastructures (SDI). This January 2017 post is a collection of the latest and most significant SDI news, data and products.

Alex Miller, president of Esri Canada, indicated in this Financial Post article that governments are continuing to increase their use of GIS for making better decisions. He said that GIS is becoming a transformational and disruptive technology. He also noted that much of Esri Canada’s business is with the public sector and that business is continuing to grow.

Parks Canada is the largest landowner in the federal government and the custodian of 168 national historic sites and a national urban park. The agency has a mandate to protect the integrity of park lands for future generations. Parks Canada has relied on geomatics to help fulfill its responsibility in areas such as ecological restoration, infrastructure management, biological inventories and monitoring, visitor presentations, law enforcement, search and rescue and information sharing with partners. 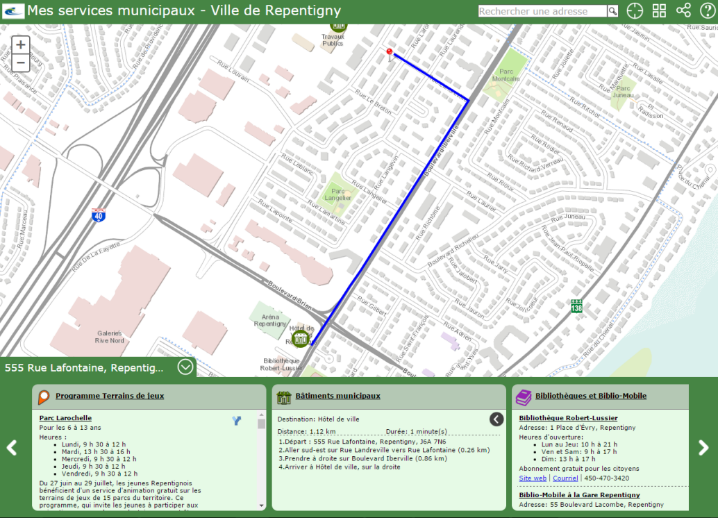 By leveraging the suite of configurable templates built on the Canadian Municipal Data Model, Ville de Repentigny has created web apps – such as the Mes services municipaux (My Municipal Services) app – to deliver geospatial information needed by stakeholders quickly and efficiently. The Community Map of Canada basemap offers greater control of the information and reduces errors, as it can be updated effortlessly.

Mapping the future: Esri’s data-rich maps are the secret weapon behind many successful brands

Esri president Jack Dangermond described Esri’s business now as the "science of where." He has managed Esri through every tech cycle, from mainframes to the cloud. In this article, he discusses how mapping solutions turbocharged with real-time data and cloud connectivity are guiding today’s organizations toward better decisions, and how Esri is plotting a course for the cities of the future.

Great potential mineral wealth in the Ring of Fire has resulted in Ontario’s Far North becoming the fastest growing area of mineral exploration in the province. However, resulting threats to caribou include habitat disturbance and loss of access to critical areas for calving or feeding. The Wildlife Conservation Society recently launched a Caribou Story Map, which helps provide a “big picture” understanding of the extent and potential impacts of this type of development on caribou.

UrtheCast announced that it has been awarded the #1 spot on Deloitte’s annual Technology Fast 50 program. UrtheCast is a Vancouver-based technology company that serves the rapidly evolving geospatial and geoanalytics markets with a wide range of information-rich products and services. UrtheCast earned the award for being the fastest growing technology company in Canada, in terms of revenue growth over the period 2012 to 2015.

The ArcticDEM project has produced high-resolution, high-quality digital elevation models (DEM) of the Arctic regions around the globe. The project is a collaboration between U.S. agencies to help coordinate efforts in the Arctic. Coupled with the accessibility of Esri's online platform, ArcticDEM data can be viewed or downloaded to meet the need for high-quality elevation data in remote locations and provide accurate measurement of topographic change.

Esri, Waze partnership: a growing trend in sharing data for the benefit of all

Esri and Waze recently announced  a partnership to help local governments alleviate traffic congestion and analyze congestion patterns. The Waze Connected Citizens Program enables local governments that use the Esri ArcGIS platform to exchange publicly available traffic data with Waze. This may represent a growing trend, in which citizens and government share data for the benefit of all.

The U.S. is a big place and it’s the third-largest country by land mass. The infrastructure that connects the country is equally immense. Here’s a web map view of the intricacy of these man-made systems. Included in the data visualizations are: the Internet, transportation and the energy distribution infrastructure.

When it comes to data, this research suggests government is limited not by a lack of data, but by the process and tools it uses to examine it. Before data transformations can occur in government, researchers argue the institutions using it must embrace strategic change.

The GeoGeek’s guide to the earth's satellite imagery

Small satellite technology is changing the world. Satellites hit a turning point a few years ago, when an upsurge in the number being built culminated in 94 launches over the span of a few months. In fact, the U.S. government, NASA, NGA and NOAA are spending millions of dollars on purchasing data and funding new smallsat programs. Record numbers of satellites are expected to launch all over the place in 2017.

ArcGIS 10.5 is a big release; arguably one of the biggest. In fact, Esri has introduced new server capabilities so big they inspired Esri to change the name of the whole ArcGIS for Server product family. Analytics and sharing are at the heart of this release. A new app that changes the way users experience spatial analytics and the expansion of how users can share content using Web GIS are just two of the features that made this an important software release.

The Esri vector tile basemaps were recently updated with new data and map style refinements. Together with other enhancements to ArcGIS Online, these updates address the key remaining issues identified during the beta period for these basemaps. The Esri vector basemaps are no longer in beta release and are now available to use in production web maps and apps. Have a look at vector basemaps to see the value of these compared to traditional raster tiled basemaps.

Ontario’s town of Cobourg has announced the launch of the ‘Where's My Bus’ application. This new web mapping application provides users with real-time updates on the geographic location of selected transit buses routes.  Updates are made every :12 seconds in real-time and displayed using ArcGIS. The application can be accessed on a computer, tablet or smartphone.

Esri ArcGIS has become a mission-critical enterprise system for local government and water utilities’ core business processes. The distinction between the software application and the GIS is no longer relevant to an end user. They have become one. This is particularly true for ArcGIS utilized by local government organizations for public asset management.