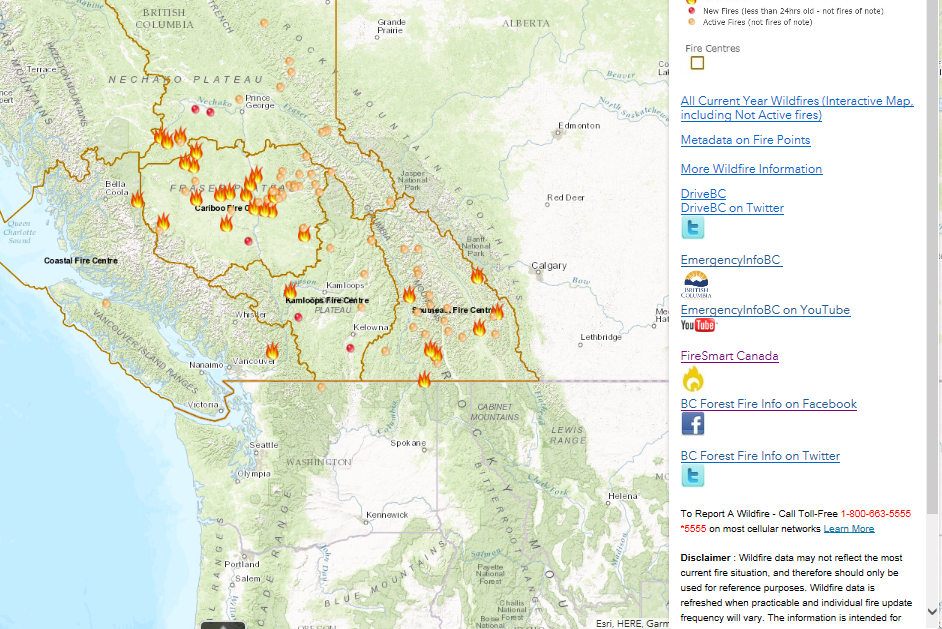 British Columbia’s forests and wildlands cover over 94 million hectares (nearly a million square kilometres) with approximately 2,000 wildfires occurring each year. 2017 has been a particularly bad year for both the number of fires and the severity of the wildfires. The BC Wildfire Service has developed an online map to inform the public regarding the current wildfire situation.

The Open Geospatial Consortium announced the publication of results from the Arctic Spatial Data Pilot (Arctic SDP). The 18 month project was initiated to demonstrate the diversity, richness and value of providing geospatial data using international standards in support of seamless spatial data exchange, with application to a range of Arctic topics. Esri Canada was a key participant in the project, which was sponsored by Natural Resources Canada and the United States Geological Survey.

2017 ESRI User Conference by the numbers – facts, stats, and numbers of interest

ESRI UC 2017 is now in the books and the planning and preparation for UC 2018 is now well underway! Some of the interesting UC facts, figures and stats that were overheard during the week include: 17,980 people along with 2,000 Esri Staff attended the user conference, representing 136 countries. There were 326 exhibitors who participated.

Statistics Canada has turned the spotlight on Canadian families as they recently published data on families, households, marital status and language. The release provides data on the recent changes in Canadian households and families from a variety of perspectives at the national, provincial, territorial and sub-provincial levels.

Recent wildfires in British Columbia are affecting air quality in Alberta quite dramatically, as some St. Albert residents recently learned. A network of air quality sensors was deployed in St. Albert, with all sensors reporting to an online collective geographic database of readings. Residents kept their eyes on the readings as they climbed in near real time, noting the spike, and commenting on social media, as news media reported the air quality effects.

The European INSPIRE SDI Directive project was started in 2007 and the SDI is expected to be fully implemented by 2020. Today, over halfway through the process, various important milestones have been completed while others still lie ahead. GIM International magazine took the opportunity to interview a senior European Commission official about the journey so far and what to look for in the future.

ArcGIS Earth – a global 3D viewer for everyone

ArcGIS Earth is an interactive globe viewer with various deployment patterns. ArcGIS Earth provides functions like navigating and searching; selecting basemaps and terrain data; accessing Esri GeoREST services, KML and other data types; adding and switching portals; and saving and sharing work. ArcGIS Earth for Enterprises focuses more on users in large organizations, exploring how they can access the value of their data in ArcGIS Enterprise and ArcGIS Online.

When government wants to address broad issues like homelessness or pollution, it needs participation from a variety of constituencies – internal agencies, community leaders and the general public. It also needs a way to make that information open and accessible to stakeholders. Esri's ArcGIS Hub is meant to put multiple types of open data and information in one place where it can be accessed and updated by citizens and officials.

How well do you know your GIS formats? Because an unknown GIS file format can be every GIS analyst’s worst nightmare. GIS technicians manage, share and create data in various geospatial data formats. Some are common. Some are not so common. GISGeography has you covered with their comprehensive list of GIS formats.