All GIS applications require some sort of geospatial data. But where does one get this data, and how do developers and users ensure that they’re using the data correctly? Is Volunteered Geographic Information (VGI) a potential source for this data?  Read this blog to find out how to assess VGI and make sure that you follow any data use restrictions.

Since both Web GIS and traditional GIS require spatial data, what’s your strategy for obtaining pertinent spatial data for your application?

One way is to collect your own data, but this can sometimes be very expensive, time-consuming and error prone. Another way of obtaining this data is to buy it from a spatial data vendor, however, this can also be expensive and the license agreement often restricts your downstream use of the data and derived products.

Another way is to get open data, which often may not be available for your area of interest, may be out of date or incomplete. Another method for obtaining this data is to use Volunteered Geographic Information (VGI), but this, too, has some pitfalls.

For instance, I recently attended a conference where the keynote speaker spoke about the creation of OpenStreetMap (OSM), which is a global VGI project. The speaker indicated that the mapping process was initially developed using a GPS receiver, a computer and a bicycle. In those early days, simply riding around on your bike with some computer equipment was sufficient to do mapping. After some tweaking, the technology was improved to the point where the collection system could be relied upon to collect reasonable quality data. At that point, the OSM movement was started to train and allow volunteers from around the world to collect data in their geographic area in a common fashion and have it posted to the OSM map.

Example of the Street basemap from ArcGIS Online for the City of Mont-Tremblant, Quebec. This basemap references the live tiled map service from the OpenStreetMap (OSM) project.

While the conference speaker made it clear that the quality of the OSM data varied from one collector to another, the end result was something that was useful. He also made it clear that the quality of OSM data was sufficient for some applications but maybe not for others. So, for example, the data may be fine for a city walking tour but not for autonomous vehicle navigation. Thus, it’s important for the data user to know and understand the minimum data quality required for their application; in other words—is the data fit for purpose?

Another speaker at the same conference indicated that in Canada to date, there has been negligible litigation related to the use of VGI. He indicated that for some time, there’s been a lot of pressure on governments to use authoritative spatial data, which generally has a higher level of confidence in terms of accuracy and currency. However, governments are beginning to look more closely at VGI due to its affordability, availability and benefits, but there may be risks associated with the use of VGI.

Most VGI data is available as open data, but it often doesn’t use the Canadian government’s open data license, which is truly open. Much of the available VGI data is open, but many have a restriction that any product or derivative product must give credit to the VGI provider. This restriction is also known as attribution back to the provider. In some cases, this is not an issue, but for example, if you were using the VGI data for a web map and others were using this web map for their application, then attribution back to the original data provider must be provided. If there are a lot of derived products, then managing the attribution correctly can become difficult. And if it’s not done properly, then it may become a legal issue.

An example of a government VGI project is from Statistics Canada, which has started a crowdsourcing pilot project that produces VGI data. The pilot project covers the Ottawa, Ontario and Gatineau, Quebec areas and has been in operation for several months. The project, which relies on OSM technology, has completed building footprints imports in collaboration with the City of Ottawa. Attribute enhancements are now being encouraged.

Another type of VGI is the Community Map of Canada Feedback application. This app should be used if a user notices a data fault, missing features or wishes to comment on the content of the Community Map of Canada. Each of these feedback items are called “observations”, and based on the map scale and type of feedback, the observation is automatically sent back to the data provider for assessment and repair if necessary. 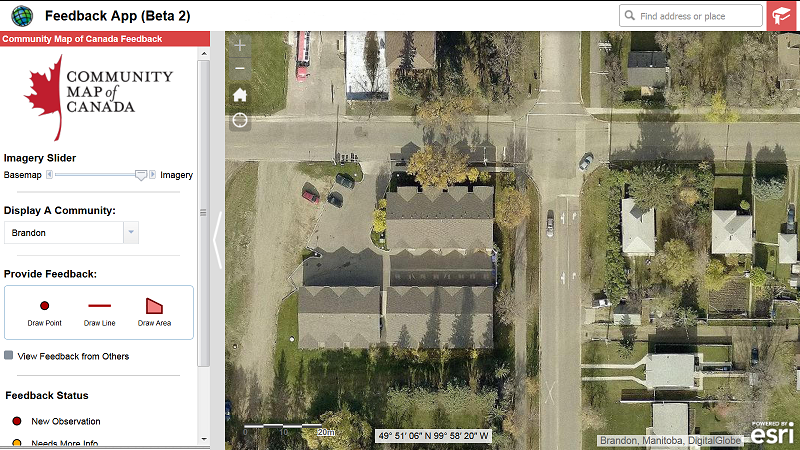 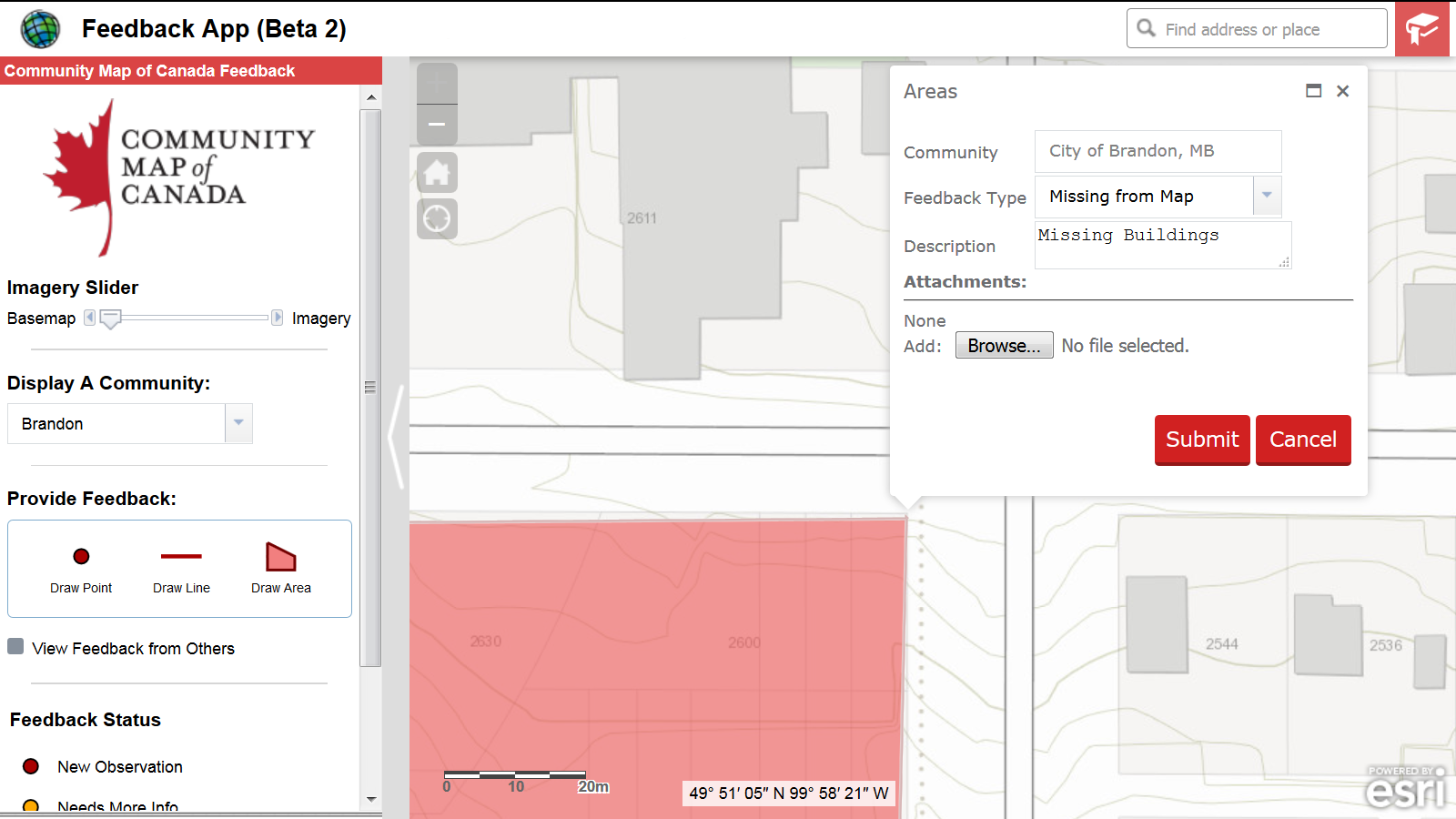 Through an app, users of the Community Map of Canada can submit their observations, such as this example of missing buildings from the buildings layer on the map.

So, is VGI a solution for all organizations? Not quite. However, it can be used for some applications, but the developers and users of the application using the VGI data must be careful about the data quality and obey any restrictions regarding the use of the data.