What do fun facts, history and geography have in common? They're all ingredients for great storytelling. See how the City of Victoria has created a great ArcGIS Online Web app to tell their story.

Since Esri launched the story maps templates, we have seen some really great stories come to life through the power of maps. These templates allow users to tell their story through a sequential Map Tour, a curated list such as a Shortlist or Countdown or a comparison of two or more maps using the Tabbed Viewer, Side Accordion, Swipe or Spyglass tools. Free to use with an ArcGIS Online account, story maps are easy to create and share within organizations and the public.

Recently the City of Victoria launched a new ArcGIS Web site to highlight the city’s walking tours. While approaching the heavier tourist season, they wanted to showcase the rich heritage that the city has to offer. Visitors can follow the tour through a smartphone or mobile device and get fun facts at various points of interest. 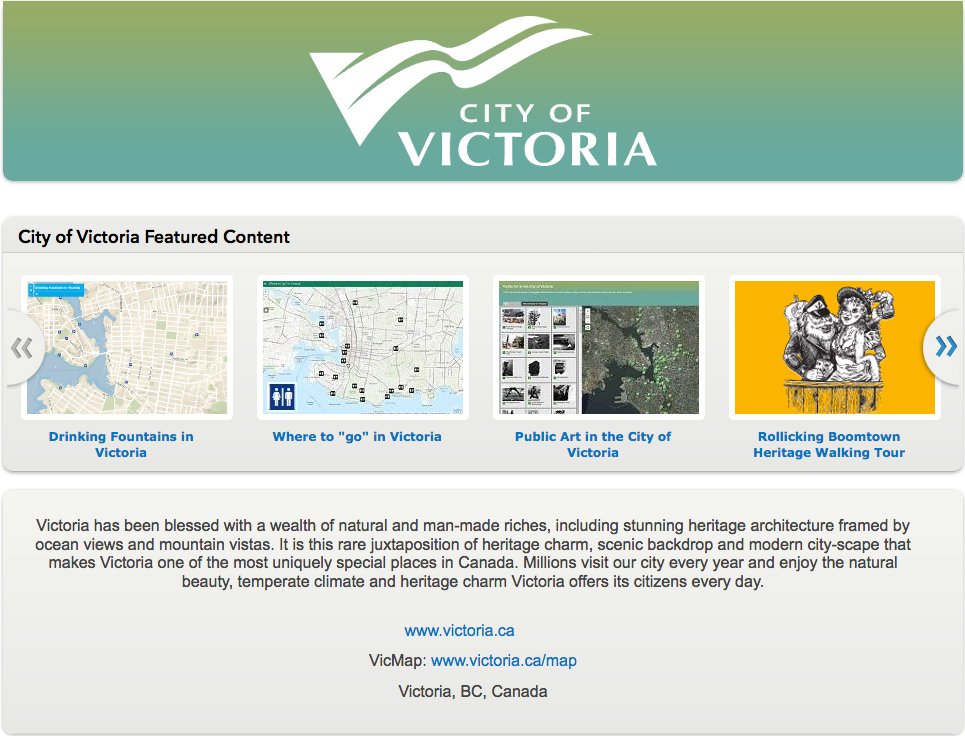 There's a heritage tour for everyone and for different interests including: Haunted Victoria, Law and Order, Mysterious Chinatown and Rollicking Boomtown.

With many theories on why, Victoria has more ghost stories than any other city in British Columbia. From Victoria’s oldest haunted sight, the Helmcken House, where the sound of a piano can still be heard, to the shadow of the “Hanging Judge” on the grounds of the old jail and gallows where the Maritime Museum now stands, you will become a believer.

The Haunted Victoria Tour takes those with a good imagination and who love a good ghost story through various spots known for sightings.

Victoria also has quite a turbulent history with the law. During the Gold Rush, Western Canada’s oldest police force had their hands full with the resulting population influx and criminal activity, including knifings, fights, murders, bootlegging, stealing and the many brothels that quickly appeared.

The Law and Order Tour takes visitors to places that were sites of disorderly conduct and criminal hangouts.

Another part of Victoria’s rich history is its Chinatown. It was the largest Chinatown in Canada until Vancouver surpassed it in the late 1890's.

Through the Mysterious Chinatown Tour you can walk through where young Chinese men came to find fortune and spend it.

The Rollicking Boomtown Tour will take you through where the miners arrived, to where they spent their time in saloons.

These story maps were developed as part of the “Map a Month” feature the City of Victoria implemented for 2014. They wanted to use a fresh way to present ideas or perspectives on what happens in the city while encouraging people to use GIS and sharing knowledge of Victoria. So far this year they have shown historical maps of Victoria, property values, cycling routes (with opportunities for people to provide feedback by drawing on the map), 1928 aerial photos, historical zoning maps, and of course the heritage walking tours. The City of Victoria saw Esri’s story maps Map Tour template as a great resource to make the heritage walking tours more interactive and desirable.