Once thought to be a suburb of Toronto, the City of Mississauga is now the 6th largest city in Canada. The city has grown over the years to develop its own identity. July’s App of the Month, Census Hub, tells us a narrative – through eight census topics – of what makes this city unique from its neighbours. 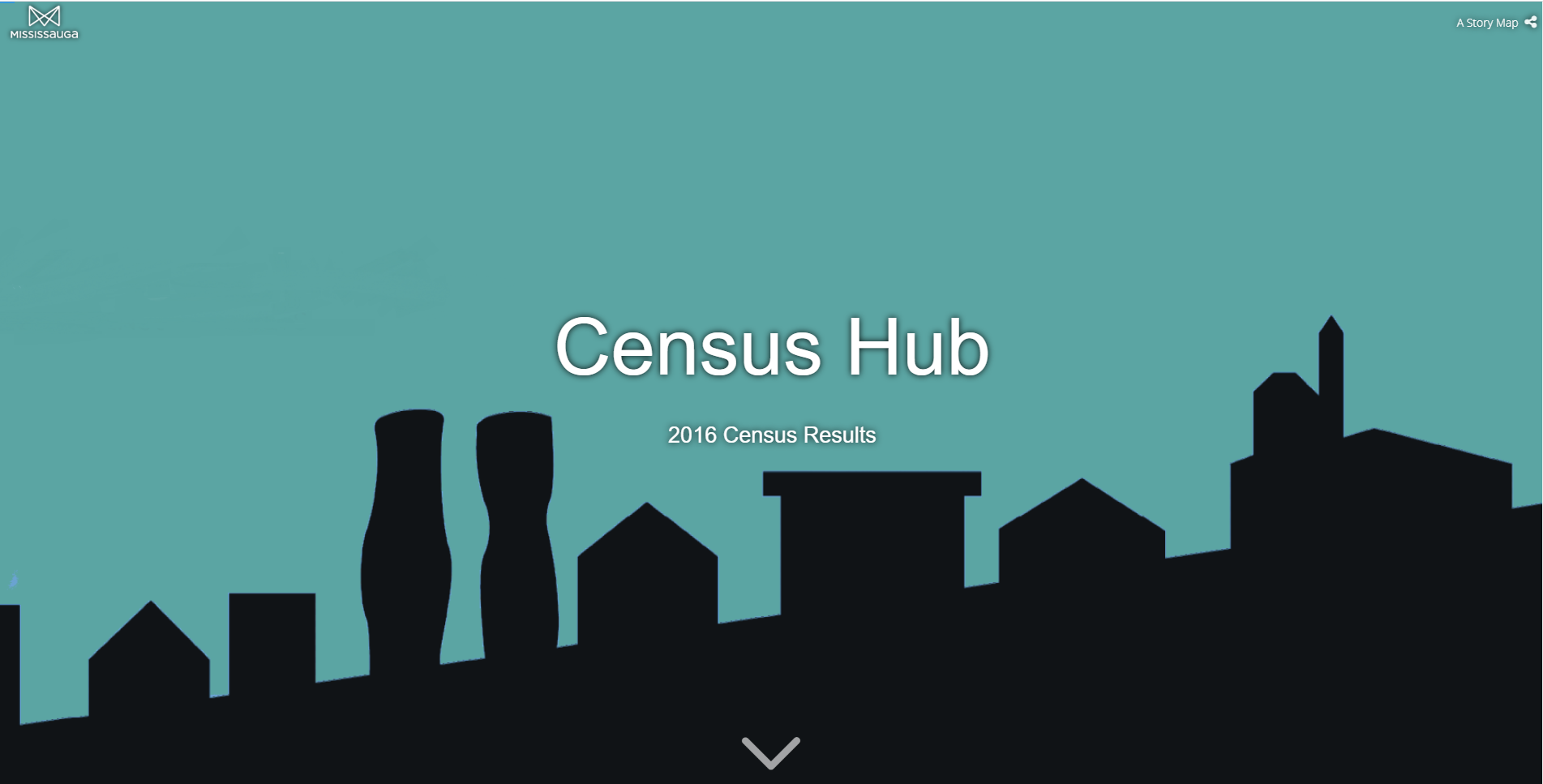 The title page for the Mississauga Census Hub

Census Hub is a new, innovative and interactive platform for exploring Mississauga and its wards and neighbourhoods through eight census topics. These census topics are population demographics, households, family demographics, languages, income, ethnocultural, labour force and education, and transportation. Leveraging ArcGIS StoryMaps and ArcGIS Dashboards, the City combined three types of media – graphics, text and maps – to display data and tell their story.

When we take a closer look at the app, the first element we notice besides its clean look is the expert use of the header to store bookmarks for the various census topics. By doing this, users can easily navigate to the census topic they are most interested in. As you scroll through the app, the header stays constant and highlights the section of the story map that you are on.

Users can navigate census topics easily through the header.

Continuing into the app, we can see why this story map was created in the first place. It was built to present statistics and analyses of the data about Mississauga’s population. Each section starts with an embedded infographic showing some statistics that give an overview of the census topic.

Each section starts with an embedded graphic that shows some interesting statistics about Mississauga’s population.

There is a similar-looking overview infographic for every topic covered. With bold and easy-to-read titles, and intuitive icons, the app gives us information that is important right off the bat. Many of these overviews also compare the proportion of change between the current census (2016) and an older census (2011). As observed above, we can see the current numbers for the Census Population and Occupied Private Dwellings as well as the percentage change from the previous census.

Mississauga’s narrative is told effectively with the addition of other embedded graphics such as charts. For many of the topics, charts are used to show trends of growth over previous years, comparisons with neighbouring cities or category breakdowns. This is generally followed by a body of text to describe and analyze the charts. The story map uses a mix of bar graphs, stacked bar graphs and pie charts.

Census Hub includes stacked bar graphs to show the proportion of family sizes in Mississauga compared to neighbouring areas and the rest of Canada.

The smart use of embedded graphics and text is what makes this application so effective in telling Mississauga’s story. This story map is a powerful tool to market the value of living in Mississauga. Sharing information on census topics like average value of homes and private dwellings, a growing population, and labour force and education in an easy-to-understand format helps families looking for a new home, as well as investors and businesses, to consider Mississauga as an option and make informed decisions.

The next item that Census Hub incorporates is maps. The narrative the City tells using images and text is further complemented by maps. These data visualizations are used effectively to show change. One excellent example is the time slider that compares two maps representing the change in population between 2011 and 2016. You can use the slider to track changes within census divisions instantly. The division colours change on a gradient to show an increase or decrease as you move the slider from left to right or vice versa. The divisions are also interactive, so when clicked on, they will give you the population information for that division.

The time slider is an easy way to understand how Mississauga’s population has changed between 2011 and 2016.

While the above example shows population change within the City, Census Hub also includes several maps that compare Mississauga with its neighbours. Below is a map that looks at average household income within The Greater Toronto-Hamilton Area. 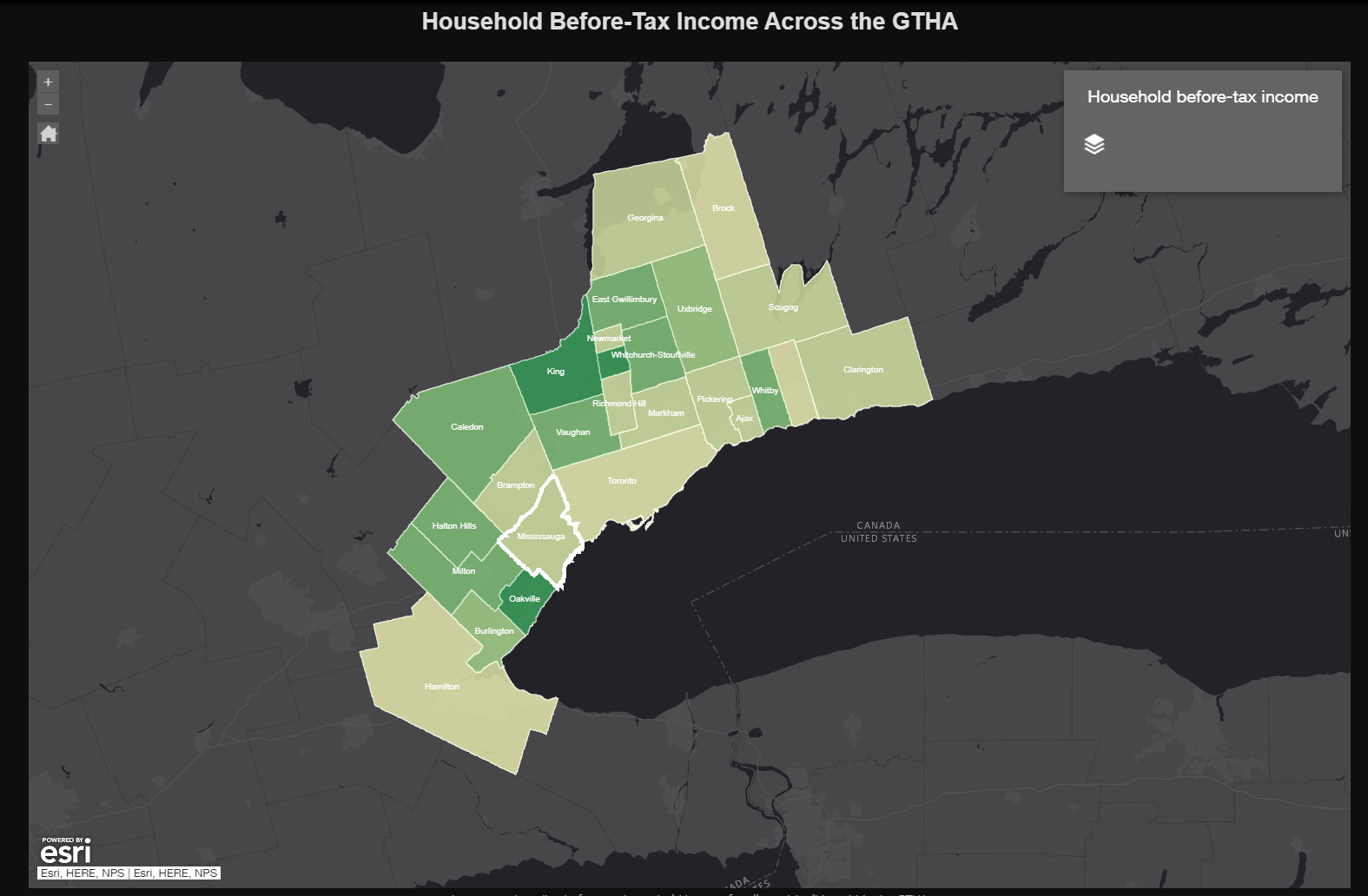 Census Hub also features similar maps that look at education levels and proportion of children and seniors, and modes of transportation. The web maps are created using ArcGIS Online and are embedded directly into the story map. 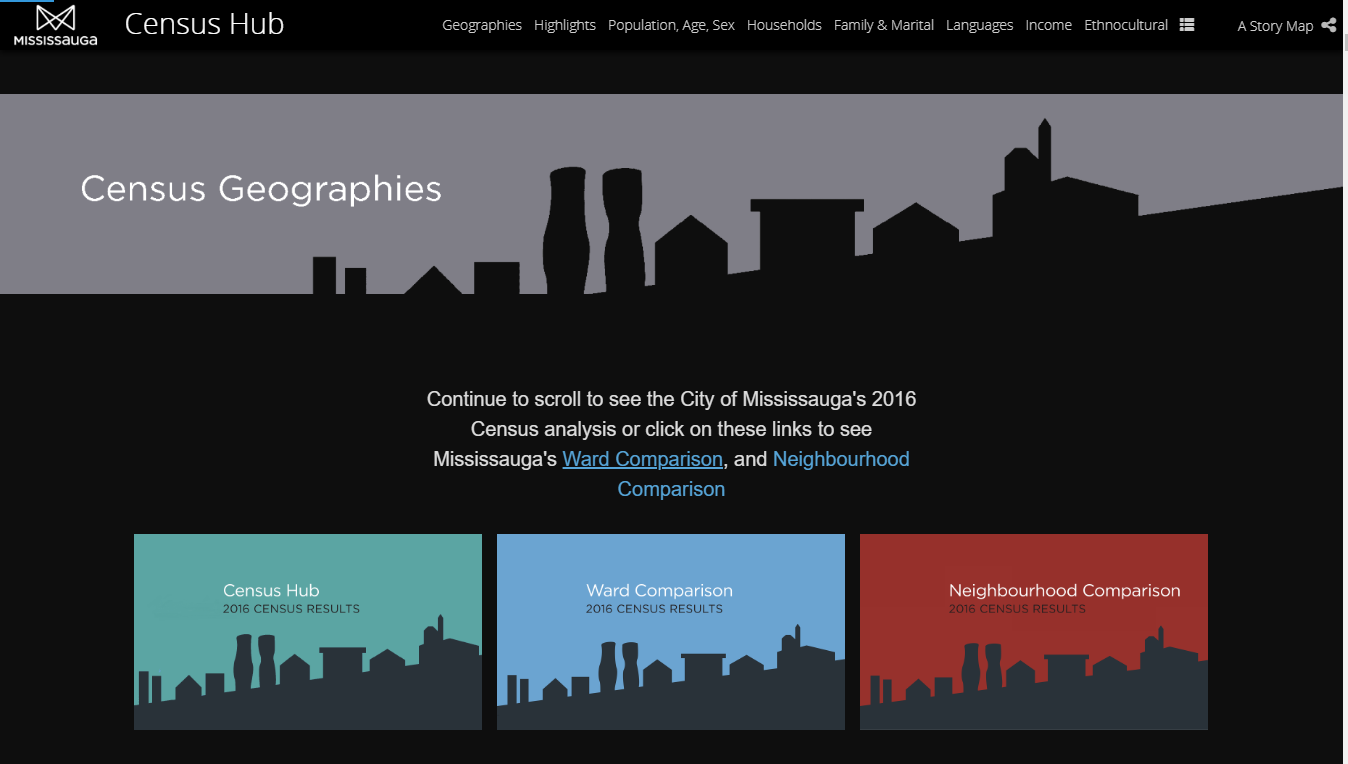 By selecting either Ward Comparison or Neighbourhood Comparison, the user is directed to a tabbed story map of dashboards – one dashboard for each of the eight topics plus one for highlights. Employing dashboard capabilities, the user is able to interact with the data by selecting a Ward or Neighbourhood, updating each cleanly designed widget to reflect the selected geography. 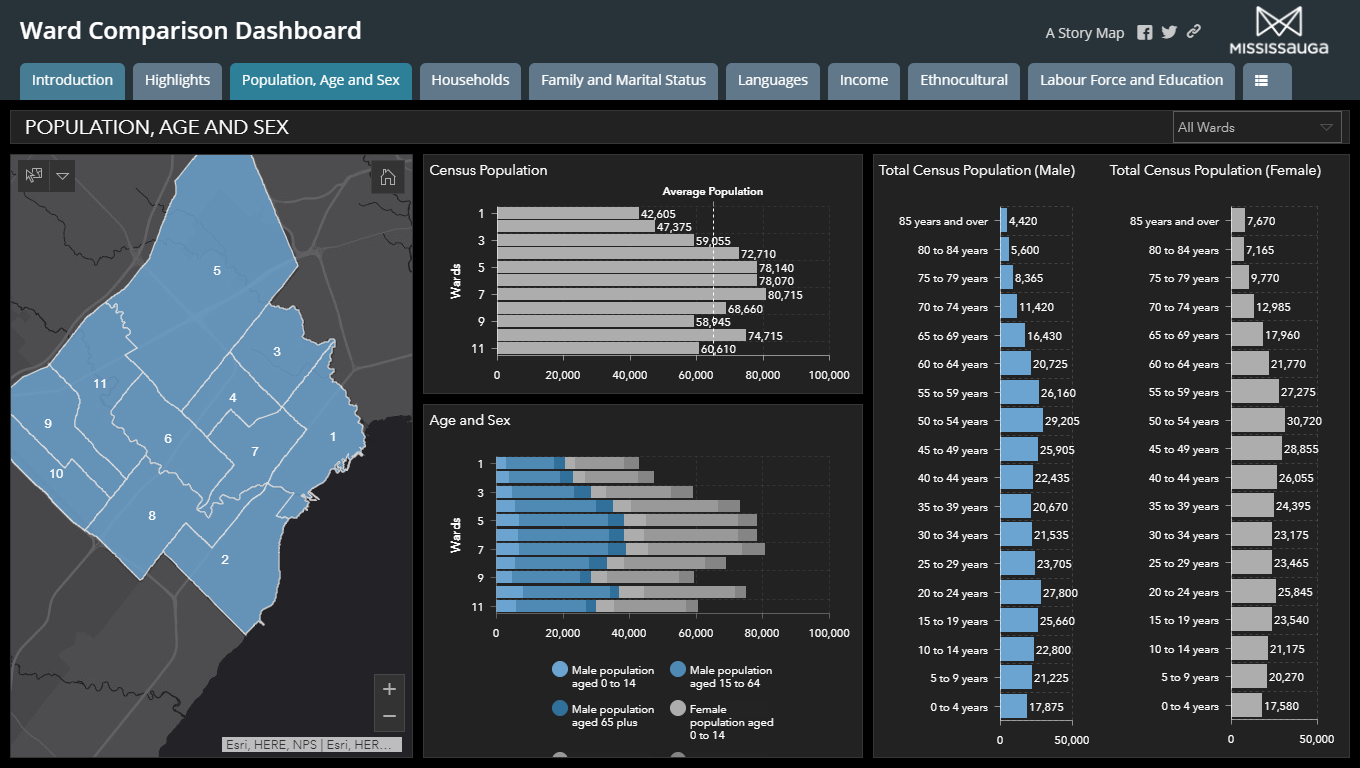 Dashboard of the Population, Age & Sex in the Ward Comparison story map 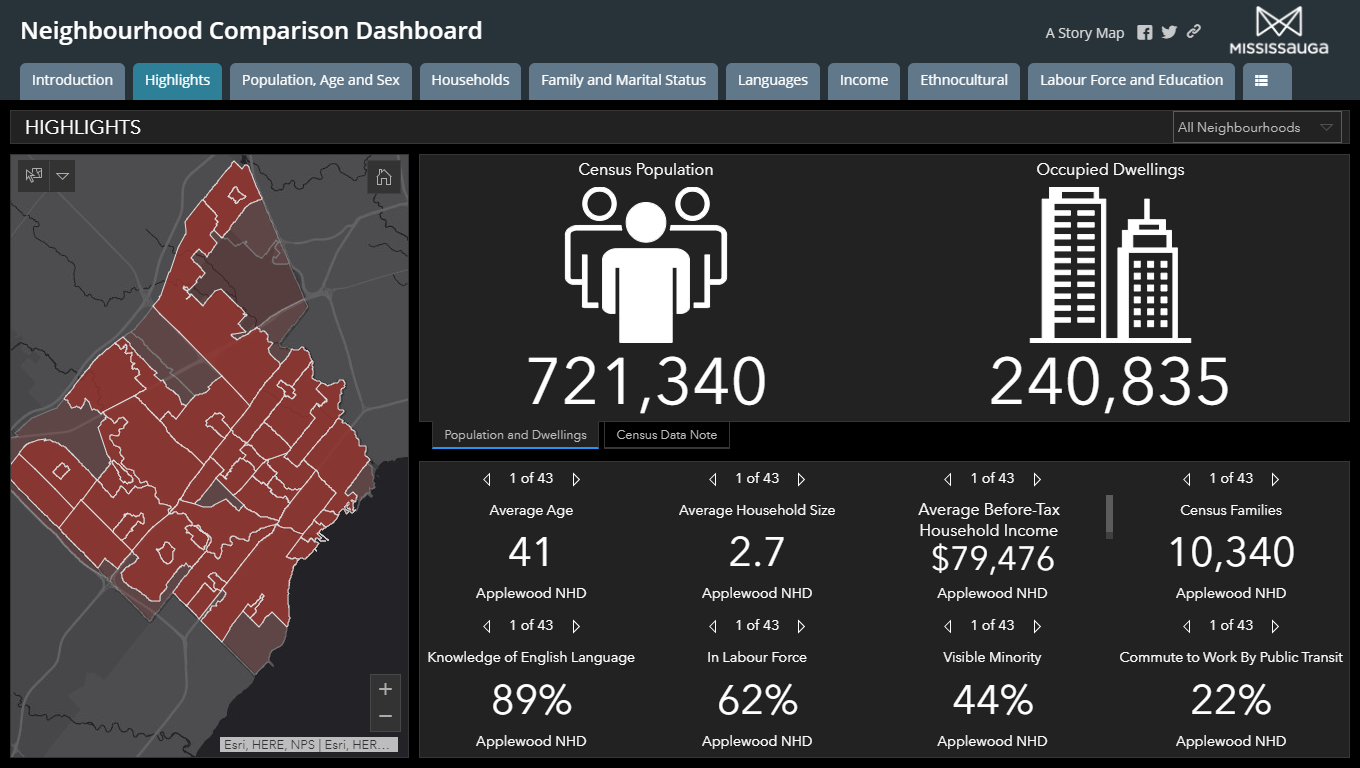 Dashboard of Highlights in the Neighbourhood Comparison story map

The interactive story map is a significant improvement from the PDF reports the City released previously to report on census results. Steve Czajka, Smart City manager from Mississauga’s IT Division, says: “Using ArcGIS StoryMaps has allowed our staff to reduce the amount of time it takes to produce census reports and double the amount of results and insights produced compared to previous years.”

Feedback from users has also been positive. “When we presented Census Hub to City Council, councillors were impressed with the story map and the amount of data quickly available to them. Being able to filter through smaller local geographies is a huge improvement from previous years as it allows for more precise data analysis. It helps us build a more data-literate organization and allows for self-serve exploration,” continues Steve.

Project lead Melanie Zakarian, a data scientist in the Smart City team, says: “Our vision for reporting census results through story maps and dashboards was three fold, it was to make data fun, to make it accessible, and to increase data literacy in all capacities. So far, it seems we’ve achieved this goal and have started to really utilize all aspects of the Esri web GIS platform to innovate and bring data forward for a number of our other datasets.”

Hashem Abdo, a researcher in the Planning and Building department, who helped build Census Hub says: “The Esri web GIS platform is intuitive, so building Census Hub was significantly faster than presenting this data through PDFs. ArcGIS Dashboards was a perfect solution for presenting census data at local geographies because it allowed us to report all of this data in an easy-to-read format. Utilizing this user-friendly technology allows for more people to explore and understand census information.”

So, as you can see, Census Hub is a great app for learning more about the population of the City of Mississauga. It effectively narrates the growth of the City through eight census topics and gives you a clear picture of what makes Mississauga unique from other cities.

Interested in creating your own story map? Visit ArcGIS StoryMaps