Canada has always ranked as one of the leading countries in the effective use of geospatial data. However, as geospatial business and applications continue to grow rapidly across the globe, it’s important for Canada to continue to expand its use of spatial data and especially the sharing of this data. The Canadian Geospatial Data Infrastructure (CGDI) is Canada’s national spatial data infrastructure and while it ranks well around the globe, it’s important for the CGDI to continually be improved–not just by governments but by the private sector as well. Read this blog post to see how Canada can build and improve on its existing SDI investments and what benefits this additional investment will bring.

A few months back, I read an article in a trade magazine entitled “Why is the (US) National Spatial Data Infrastructure Important?”. There were several key concepts in this article that I think apply very much to the SDI situation here in Canada. Here’s a summary of the important concepts in the article and how they could affect or be applied to CGDI.

The first concept in the article relates to an SDI report card. I’ve presented this concept at conferences and blogged about in the past. Peter Drucker once said, “what you can’t measure, you can’t improve”. So, how do you measure an SDI? Basically, the US report card concept involved setting up rating criteria and then rating the US NSDI against each criterion. If the same rating criteria are used in Canada as were used in the US for their NSDI evaluation and report card, then the CGDI comes out relatively well. Based on my evaluation against the criteria, the CGDI rating increased slightly in 2018, compared to my rating in 2015. 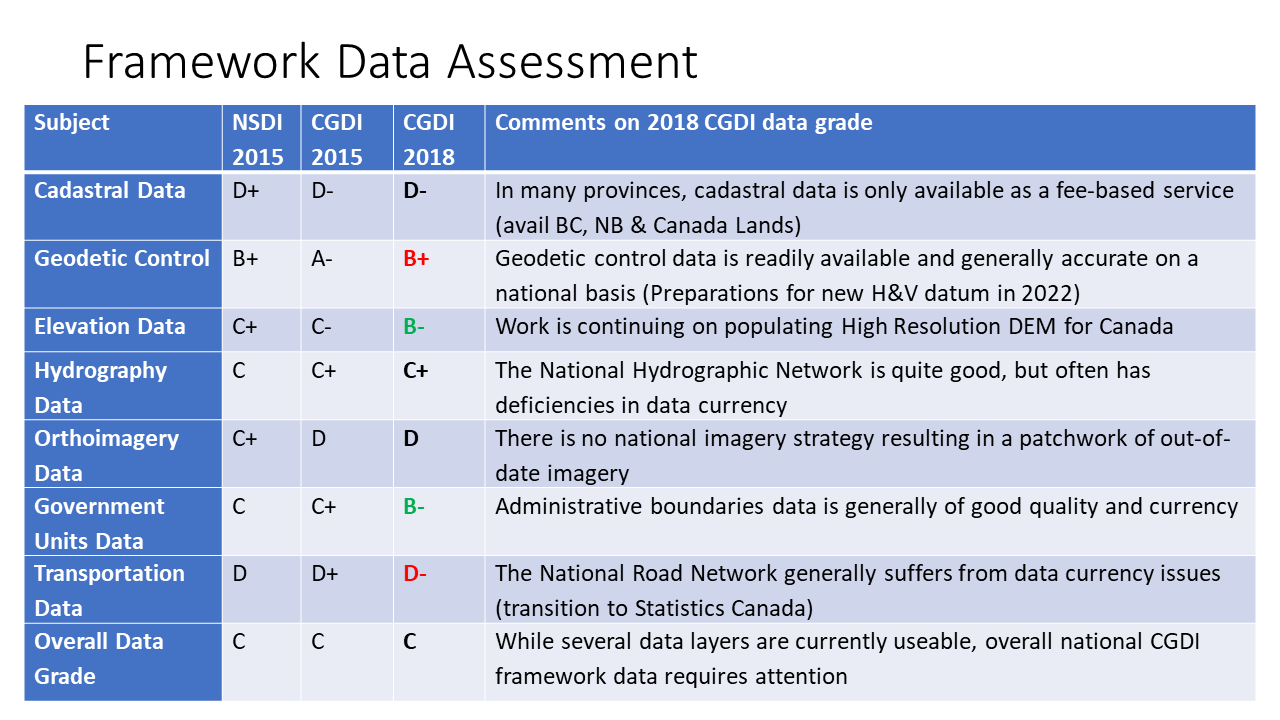 My assessment of the CGDI framework data in 2015 and again in 2018 against the same criteria as the 2018 Report Card on the US National Spatial Data Infrastructure. In the assessment, some of this national Canadian data was improved, some remained the same and some data rankings went down. This assessment was presented to the Canadian Council on Geomatics (CCOG) in 2018.

The second concept in the article highlights the importance of a national SDI. The article mentioned several applications such as natural disasters where an SDI is critical for sharing geospatial information quickly and seamlessly between those who have the data and those who need the data. The article also mentioned that the 2008 US mortgage crisis was not forecasted because no national records on land ownership were then or even are now available. Find out more about the importance of SDIs.

Another concept in the article relates to the passage of the 2018 Geospatial Data Act, which enacts legislation in the US stating that the different levels of government, academic institutions and the private sector must work together to develop the US NSDI. In Canada, there is no similar legislation. Canada has the Canadian Geomatics Accord, which is simply an agreement to share data and help build the CGDI. However, the reach of the Canadian Geomatics Accord is limited to a few signatory agencies and has no measures to oblige governments or others to share their data or on how they should share their data within the CGDI. 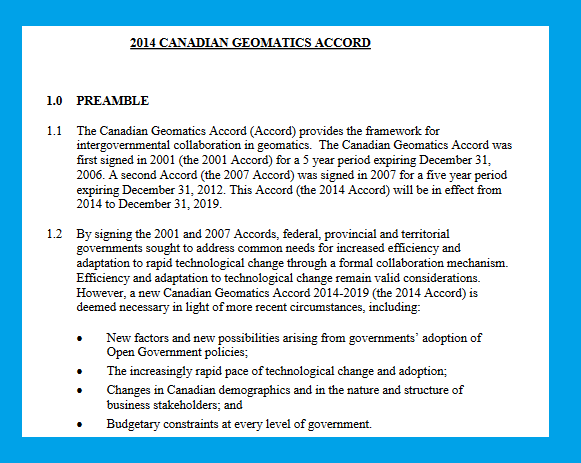 Some of the preamble text from the 2014-2019 Canadian Geomatics Accord.

The final important concept from the article is the inclusion of the private sector in the Geospatial Data Act. There is a specific provision in the Act which states: “The Committee and each covered agency may, to the maximum extent practical, rely upon and use the private sector in the United States for the provision of geospatial data and services.” No such provision regarding the use of the private sector is included in the 2014-2019 Canadian Geomatics Accord. Also, geomatics in Canada has become a much broader activity than it was even a decade ago and is now well beyond the sole limits of the federal and provincial governments to manage or control. Other governments, the private sector and academia need to be included in the new Canadian Geomatics Accord or ideally geomatics legislation.

So, while Canada is continuing to develop and improve the CGDI, there is still room for improvement. Going forward, Canada needs to measure and report on its SDI performance; continue to transition SDI use into new application areas such as public safety, marine, energy, smart cities and NG9-1-1; consider enacting geomatics legislation to improve SDI effectiveness, efficiency, usability and  reach; and finally for governments to work more closely with the private sector to speed up the modernization and use of the CGDI.