Clearwater Seafoods collects data about the seafloor and the species it harvests, as well as from its workflows and past practices, to improve the sustainability and efficiency of its operations.

When executives from Clearwater Seafoods met with an ocean mapping expert, it opened a new window on the undersea world. “It just blew us away because all we’d ever had were surface charts of the ocean,” said Jim Mosher, Clearwater’s director of Harvest Science. “Now, all of a sudden, we could see the contour and shape of the floor. It was a showstopper.”

The Nova Scotia based brand specializes in luxury seafood including scallops, clams, crab, shrimp, and lobster that it gathers mostly from the seafloor in coastal Canada—and sonar imaging and 3D seafloor models have shifted the brand’s entire outlook.

Some of Clearwater’s catch, such as clams, actually live in the seafloor, creating homes in the silt and mud known as the substrate. Catching these seafloor-dwellers is labor-intensive and expensive. A company like Clearwater needs to know when and where to harvest, but also when and where not to harvest to protect the resource and the environment. Seafloor models, made with a geographic information system (GIS), provide an additional tool to improve harvest operations and practice sustainability.

“Rather than the traditional method of just going to sea, we do a lot of pre-trip planning,” Mosher said. “We’ve moved the operation from one that senses and responds to one that predicts and then acts, targeting fishing sites with high precision. Our entire mentality has changed with the increased availability of robust data and mapping over the years.”

“We knew that some of these species that are filter feeding, like scallops don’t like living on sand, because they choke, so they aggregate on gravel,” Mosher said. “So all of a sudden, we were targeting gravel patches. But what we were doing was still really crude, compared to what we have today.” 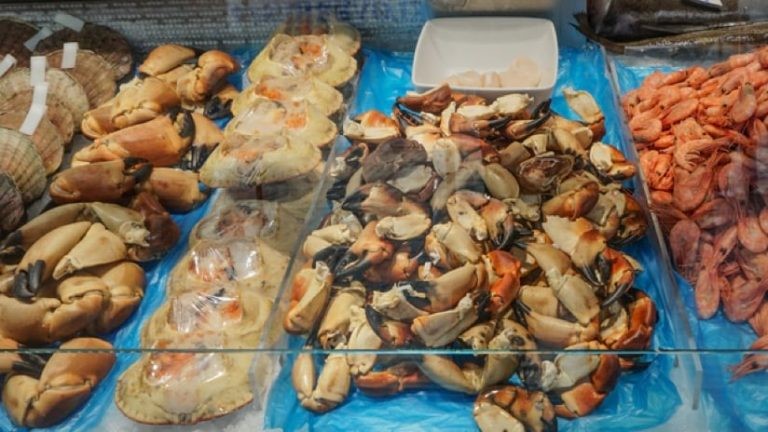 Mosher’s team continued to gather data on seabed types, rock structures, and other oceanographic ecosystem conditions, which function as layers on a base map. The layers can be combined to gain an ever-growing location intelligence. Bathymetric information can be overlaid with current and past fishing practices to determine best practices.

Clearwater’s precision approach is a matter of corporate responsibility. In Canada, companies are granted rights to a specific fishery to hunt specific species; a company like Clearwater sees it as their mission to be stewards of the ocean to protect its holdings through responsible fishing practices.

When a Clearwater ship sets sail to gather a catch, the procedure varies by species. To target scallops, a ship measuring between 140 and 150 feet, carries a crew of 16.

Scallop gathering often includes an extensive pre-planning expedition with a survey ship done in collaboration with other stakeholders in the industry. The team at Clearwater is able to mark a potential fishing area and divide it into individual grid cells on a smart map, using ArcGIS Pro. They use an underwater camera to capture seafloor images that assist in understanding species composition.

“We digitize the images, count the scallops in the grids, and complete analytics to generate density models—and we map all of it,” Mosher explained. For clam operations, captains will rely on “backscatter” maps that use multibeam technology to identify substrate hardness. These maps have multiple uses. Clearwater’s work helps them understand biomass in specific areas, knowing that allows it to calculate how quickly an area will rebound. 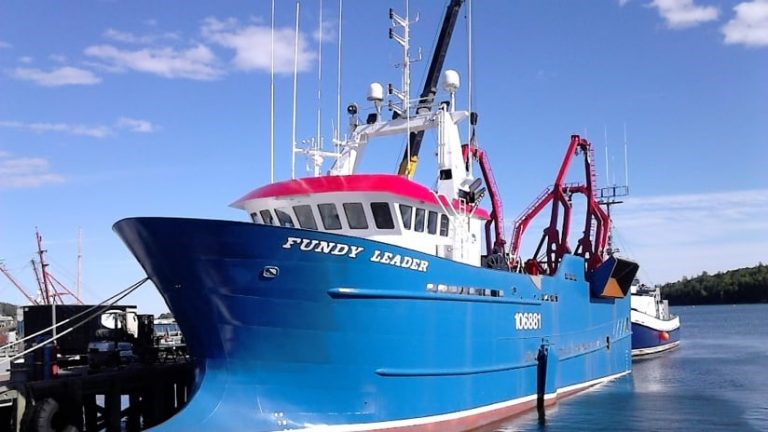 Clearwater partners with academic institutions in Nova Scotia to create thematic maps. “Geology, sediment, backscatter—and on top of that we add our survey layers,” Mosher said. “And then of course we have catch data on maps that show exactly where the ship has been in the past, so we don’t go and fish in the place we were last.”

Before a fishing expedition, a ship’s captain will study these map layers to make plans. The data will travel onboard as each ship is equipped with ArcGIS Pro on the bridge. “It’s become such an enormous tool for them that a lot won’t go to sea without it,” Mosher said.

A vertically integrated company that processes and distributes its catch, Clearwater outfits its ships to be floating factories. Their GIS affords the ability to organize and see all information related to every facet of the shellfish populations they harvest for optimal efficiency. It allows Clearwater to further its goals related to sustainability, but also traceability for food safety, and to convey the origin for each catch. In this way, GIS becomes a four-dimensional tool, cataloging the space and time for the present catch and all past catches.

Extensive mapping can yield immediate gains. However, Clearwater leaders consider the time and money their teams spend on mapping to be a long-term investment, allowing the company to adopt a sustainable business model marine development experts call blue growth. The alternative is a short-sighted emphasis on immediate gains.

With increasing amounts of high-quality data, Clearwater teams use their knowledge to forecast and predict harvest outcomes. They use sophisticated assessment models that determine stages of growth and log activities to avoid returning to the same fishing grounds until appropriate time has passed. Clearwater also factors in weather influences, species biology, and other relevant details to determine the most effective methods of harvesting.

“We’re really moving the operation from just considering ourselves as hunters to being one of culturing and nurturing,” Mosher explained. “To be able to look at the seafloor and understand population characteristics—these are the tools we need to do that. It supports the objectives of sustainability our company has.”

Growing Urgency to Map and Conserve the Ocean

Although humans have spent centuries developing increasingly sophisticated ocean maps, most are documents of the ocean surface. As recently as 2017, only six percent of the ocean floor had been mapped. Many of the tools of modern mapping, such as lidar, do not propagate well under water. Advances in multi-beam sonar, which uses acoustic waves to gather information, have led to an explosion of knowledge related to bathymetry, the study of underwater topography.

Larry Mayer, the scientist who tipped Clearwater to multi-beam sonar, now runs the Center for Coastal and Ocean Mapping at the University of New Hampshire. In a 2015 television interview, he noted a goal to “get the whole ocean mapped with this level of detail.” Six years later, the job is around 20 percent complete.

The global Seabed 2030 project, an attempt to map the entire ocean floor including canyons deeper and mountains larger than any on Earth, aims to be finished by the end of the decade.

Seafloor mapping is part of a larger ongoing effort to maximize our understanding of the ocean, and to conserve it. More than 50 countries have signed on to the ambitious goal to safeguard at least 30 percent of the world’s land and oceans by 2030. In 2018 alone, scientists collected more ocean data than in the entire 20th Century.  Researchers are using the data to understand such things as ocean circulation, sea level rise, weather systems, tsunami wave propagation, tides, and sediment transport.

Underlying much of this effort is the race to understand and mitigate the damage climate change inflicts on the ocean. The ocean absorbs high levels of carbon dioxide, increasing its acidification which in turn causes behavioral and physiological changes in marine life.

At Clearwater Seafoods, they are monitoring for impacts of climate change. “Carbonate based shellfish don’t like the changing pH,” said Jim Mosher, Clearwater’s director of Harvest Science. “Robust data collection gives us better visibility to how climate change may be impacting the species we are harvesting.”

The blue economy—which includes companies like Clearwater—is the world’s seventh largest economy, generating $2.5 trillion in activity each year. Conservation goals will not merely save the ocean from humans, but also for them.

Originally published in the Esri Blog

If you would like to learn more about advances in data collection and analysis to gain a better understanding of our oceans, register for the Esri Canada GIS Ocean Forum on Wednesday, June 9. 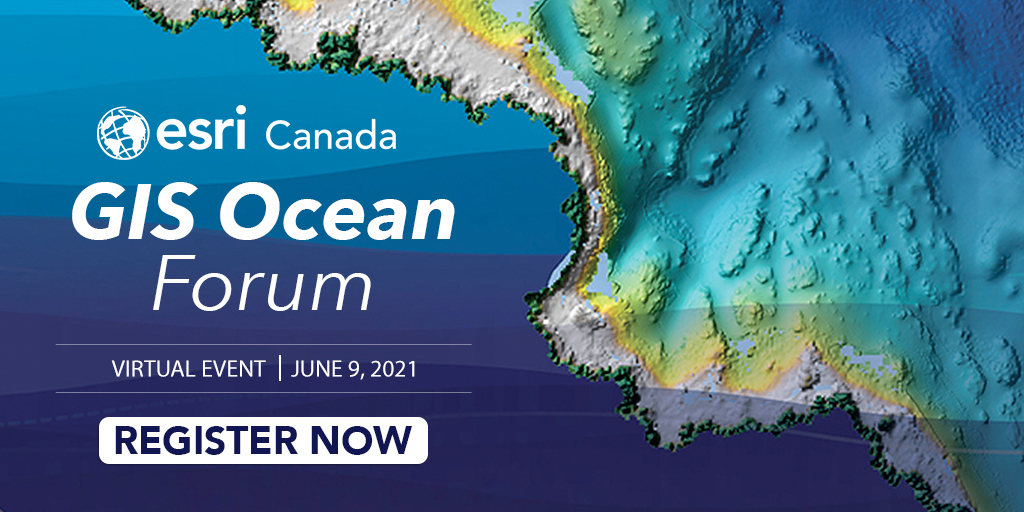