The City of Beaupré is well known by the Québec population and elsewhere. It hosts, among others, Mont Sainte-Anne, a resort favoured by sport and nature lovers. This is the reason that although the city is home to close to 4,000 permanent citizens, it must instead serve 7,000! In fact, many people have a second home in the region. In this two-part series, we will discuss the City of Beaupré and its experience with the Community Map of Canada. In this first post, we will talk about using the basemap for internal purposes.

When Émile Savard started his post as urban planning technician for the City, management wanted to first set up a geomatics department. Management produced a LiDAR summary of its territory to get a more accurate picture. The expectation was for the City to share its geographic data on a local server. The various stakeholders involved in this project quickly realized that this solution was not adaptable to the resources at their disposal.

After realizing this, Émile heard about the existence of the Community Map of Canada. In this initiative, he saw a way to host and share his data much more easily, without having to keep hardware up to date or dedicate a resource for it. Furthermore, management felt it was important to participate in an initiative that highlights data provided by relevant organizations such as public municipal and government organizations. As Émile states, “cities control the data, they are in the best position to provide the best information about their territory”. 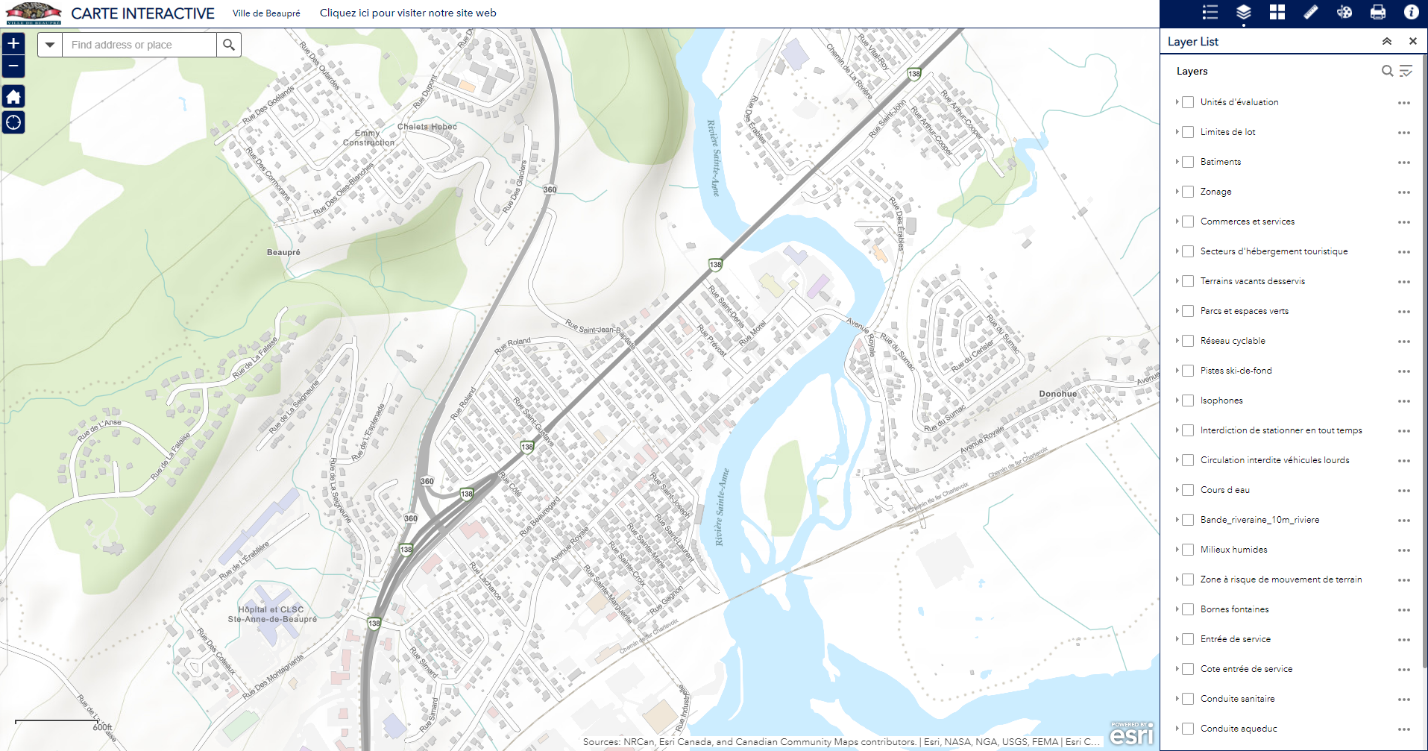 Since joining the Community Map of Canada program, the City has developed several apps, both internal for the city employees and external for the citizens. The City incorporated the buildings’ footprints, streets, paths, contour lines, imagery and more to the basemap. Internally, the apps were developed for the urban planning, public works, recreation and fire safety departments. These include, among others, apps for inspection of street furniture in the parks and a survey for field inspections. For Émile, these apps help City staff to work more independently and to have easier access to the information they require. The work is thus done more quickly, as the apps have made it possible to reduce the number of actions required to accomplish a task. “Daily requests are more easily handled with the team” states Émile.

Precision and timeliness of the basemap is vital for employees to have accurate information. The capability of quickly updating the basemap has therefore proven to be an important factor in being part of the Community Map of Canada: “with other basemaps, the process of updating and editing is slow. With the Community Map of Canada team, the process is fast”. In fact, the team carries out daily updates and two new basemaps are published per week. The City is in full swing and many people want to settle here. Consequently, four new residential sectors are currently in development. To ensure smooth running of the work, Émile has developed a data collection app to inspect the various sites. Information on the type of site and the status of projects is recorded. Photos of the work progress can also be added. Another app was developed for the recreation department to inspect street furniture in parks.

Émile did not expect his apps to have such a quick success with the staff. “At first glance, I would not have thought that the recreation department could be interested in these tools. But it was these members who came to me requesting access” Émile added. “They were tired of having to carry a paper notepad in the field with all that it involves”. The fire services also resorted to these tools. The apps are now used weekly by the teams, “there are less calls for certain types of requests, or for requests between colleagues, less handling of data on paper, therefore less processing errors” stated Émile. The apps have enabled them to become more efficient, to the great advantage of the citizens.

Don’t miss the second part of this blog on the City of Beaupré. Next time, the topic will be on sharing information with citizens.