The City of Beaupré is well known by the Québec population and elsewhere. It hosts, among others, Mont Sainte-Anne, a resort favoured by sport and nature lovers. This is the reason that although the city is home to close to 4,000 permanent citizens, it must instead serve 7,000! In fact, many people have a second home in the region. In this two-part series, we will discuss the City of Beaupré and its experience with the Community Map of Canada. In this second post, we will talk about using the basemap for external purposes, with the goal of communicating with the population.

Promoting communication with the citizens

When Émile Savard joined the City of Beaupré, management expected to expand access to information for its citizens. The goal was to provide information on operations happening in the region, snow removal being among them. The ski resort is popular with skiers because the city gets a significant amount of snow. Informing the citizens on curbside parking at night was a noteworthy element. So, Émile created a web app. When snow removal is planned for certain areas, residents can easily find out if they can leave their vehicle on the street. “The goal was for the citizens to easily identify if they can park, when the street is green, it’s possible, when the street is red, it’s not possible. The information is produced in the form of two synchronized snow-clearing flashing lights” says Émile.

The citizens are also able to enter a complaint using an interactive Survey123 form on the City’s website. They can identify the subject of their request as well as locating it on the map (to remind you, the map is accurate and up to date since the base is fed by the City’s data). The accuracy of the basemap is an important element as the City wants to ensure the reported problem is resolved properly, therefore they need to know the exact location. Émile told us that “we can easily see daily if new requests were added”. After one year in operation, approximately 40% of requests are now made online. 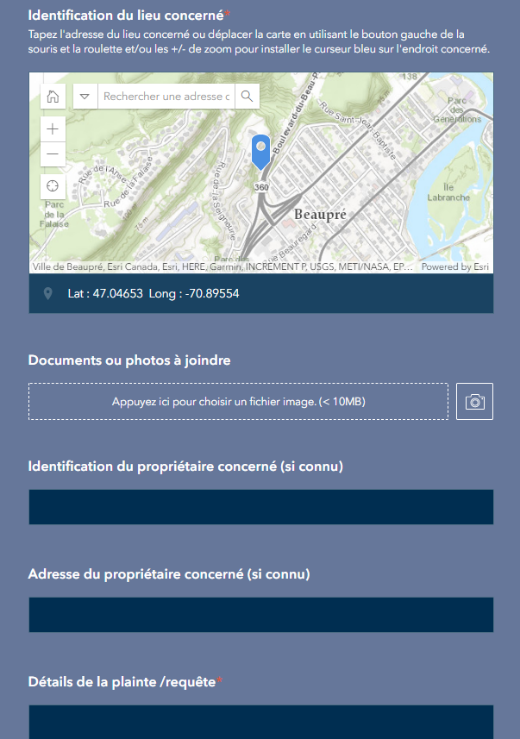 Residential developments bring their own set of questions from concerned stakeholders: business people, surveyors, sponsors and real estate agents. “We often received calls asking for a description of the terrain at any given location, ex. information on the relief”. The basemap forms the basis of their interactive map, therefore allowing the users who view it to answer their questions. “The map loads quickly and is user-friendly” says Émile. He adds “we have had 6,000+ visits to the interactive map in 18 months, for approximately 350 visits per month”.

The City’s goal is to update its data four times per year. Ultimately, it plans to add an open data portal online. Management also aims to improve what is already in place, i.e. have a 23-layer interactive map available to the citizens, in addition to modernized 45-layer map for the staff, constantly evolving based on the needs of the citizens and the team. The City would also like to eventually do a real-time follow-up of snow removal vehicles. In a nutshell, the City thinks big!

Whether it is the residents now having access to a wide range of information or perhaps the city’s staff who can more easily and quickly find answers to their questions, the different apps created make the City more efficient and intelligent, to the great benefit of its residents. For Émile, the Community Map of Canada is “the best way to share data. As the community grows, the benefits grow for everybody!”.

Do you want to learn more? Don’t hesitate to contact me at fblouinmichaud@esri.ca.