August’s GIS Ambassador of the month is Scott Norman from Toronto, Ontario. Let’s find out more about this Senior Market Analyst and how he’s supported the Esri Canada’s K-12 group with a new resource for students.

This month’s GIS Ambassador is Scott Norman, a Senior Market Analyst at Canadian Tire in Toronto, Ontario. This post will highlight his work on an ArcGIS Online learning resource, GIS background, and professional career.

We were introduced to Scott through one of his former professors from Ryerson University, Dr. Claus Rinner. It’s been great to work with someone keen to share his knowledge and passion for geography and GIS with the next generation. 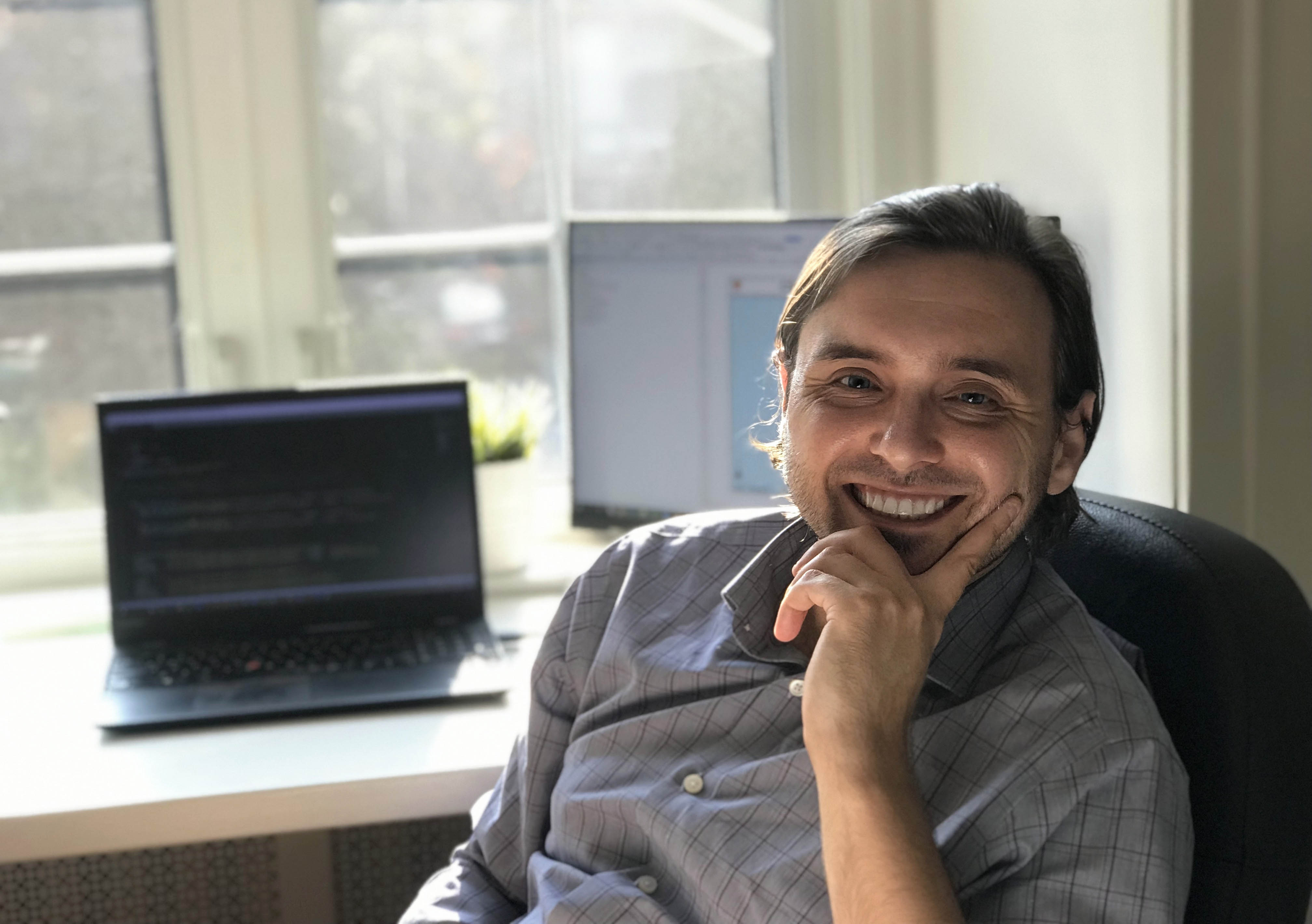 Scott is always ready to help. When he was an undergrad and master’s student at Ryerson University, he was known as a great resource, as he helped many students with their assignments at the GIS lab.

Tell us about your GIS background and work history.

My career in geography started at Ryerson University in the Geographic Analysis program. In the third and four years of my undergrad, students were required to complete a set number of hours at a work placement. My hours were split between working with a professor in the Geography department and consulting for the bakery where I was working.

The opportunity to consult for my employer presented itself after I realized the bakery was not collecting postal code information from their customers. This prompted me to implement a system to track the customers’ postal codes and bread purchases, allowing for this important information to be mapped. The outcome was the ability to target flyer distribution to existing and potential customers. This was the first time I saw the power of GIS applied to a sector where I worked.

During that time, I had also begun my criminology courses and did a minor in this area. As a geography major, I had the opportunity to collaborate with one of my professors by presenting how GIS can be used to understand crime in an Introduction to Criminology class.

After graduating, I had a contract position at a Canadian packaging and printer company before working at Canadian Tire. In both instances, the company hired me to do basic data collection, entry, and manipulation as I had taken both programming and database classes in university. Shortly after starting at Canadian Tire, I was asked to help integrate FGL (formerly Forzani) into our GIS environment.

Once FGL was integrated, I was asked to help design, implement, and continuously develop a Zone Management system for the Ship-to-Home initiative. The system started as a pilot project but would later be responsible for both the eligibility and the pricing of shipping across Canada for all Canadian Tire and Party City locations. As I began working on the Zone Management, I decided to go back to Ryerson University for the Master of Spatial Analysis program. The program gave me a better understanding of the nuances of spatial analysis, and I was lucky enough to have Canadian Tire allow me to use real-world sales data for my major research paper.

Today, I am a data steward and maintain many of the spatial datasets within Canadian Tire’s GIS environment. This allows me to work with many different teams across the organization and help bring a spatial component to their daily work. In addition to this, I have also begun working with IT to update and improve our GIS infrastructure. This upgrade project has two main objectives. The first is to increase the efficiency of our current GIS employees’ work. The second is aimed at enabling non-GIS employees across the company to access and implement spatial datasets more easily into their analyses.

Why did you want to get involved as a GIS Ambassador?

I wanted to get involved as a GIS Ambassador to share my knowledge that GIS is a tool that can be applied to almost every sector. However, the average person does not realize it exists.

I was lucky enough to have a teacher in high school who introduced me to GIS in my World Issues geography class. I recognize how easily I could have missed out, and that’s why I want to do my best to promote it as much as possible.

How have you supported the use of GIS in K-12 education?

Over the past couple of months, I have been working with Esri Canada’s K-12 education group to create a Career Path Series lesson that focuses on the retail sector’s use of GIS. This involved creating the Trade Area Creation and Sales Mapping tutorial that introduces students to a variety of ArcGIS Online analysis tools, including creating joins and drive-times. 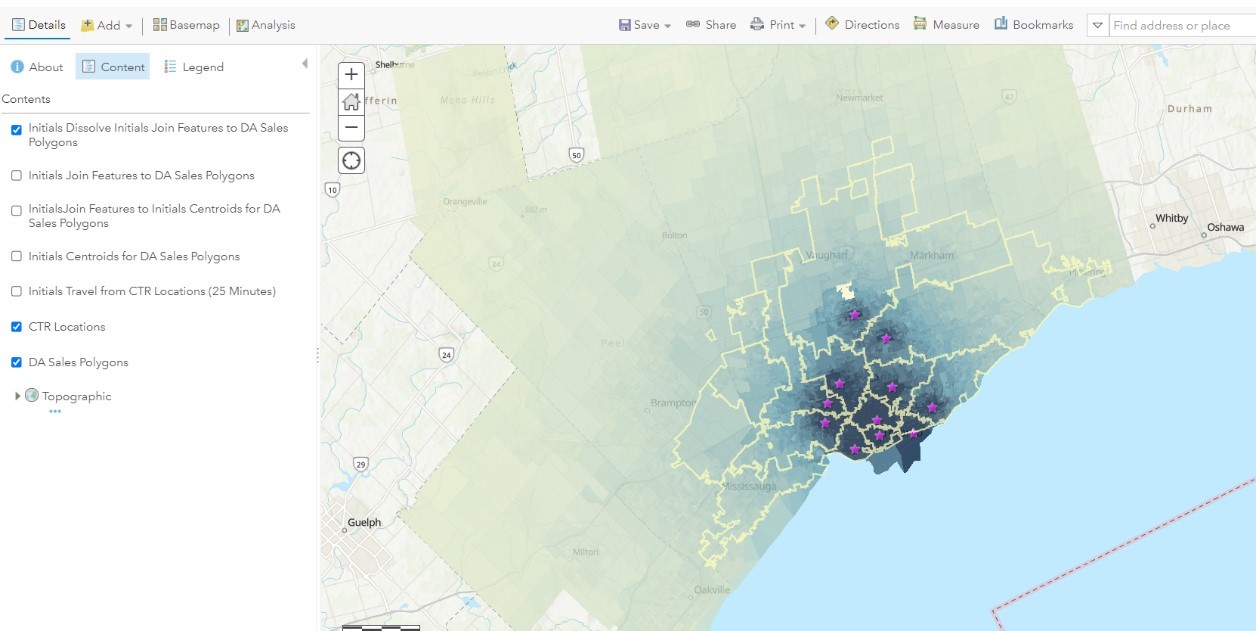 The final map students will create from the Trade Area Creation and Sales Mapping tutorial. In September, the GIS for Retail lesson will be posted on the Esri Canada K-12 Resource Finder.

The Career Path Series showcases how sectors use spatial analysis and maps, no matter their focus. It’s important to connect with students interested in GIS and show them potential career paths. As previously stated, the GIS field remains relatively unknown to many, so the more we can promote it, the better it is for students to see the potential.

What are your plans in supporting the K-12 community in using GIS?

I will help Esri Canada’s K-12 education group with some upcoming events starting with developing and testing the Skills Ontario GIS competition question. At this event, students get to show off their ArcGIS mapping abilities. I will also be supporting the K-12 Education group at Esri Canada’s GIS in Education and Research Conference.

Thank you, Scott, for your enthusiasm and support! We are excited about our future projects with you.

If you are an educator looking for a GIS Ambassador to help you with a resource or a workshop, sign up to connect with one.