In honour of World Water Day, we’re sharing with you COBAMIL’s Répertoire interactif du PDE story map. Read more on how this watershed organization is engaging residents and communities in Québec to get involved in water protection.

There are 40 watershed organizations in Québec working jointly to protect the province’s water resources. COBAMIL is one of those organizations, serving a population of 400,000. Operating on Montréal’s north shore around the Mille-Îles River, they put scientific understanding of issues at the core of their water protection initiatives. Their mission is to consult, educate and raise awareness of water resource management among the population.

The COBAMIL story map, “Répertoire interactif du PDE”, arose from the need to summarize the wealth of information contained in the Plan directeur d’eau (PDE), a 800-page document issued by water resource stakeholders. In creating the story map, Cynthia Gagnière, project manager at COBAMIL, wanted to empower and motivate the local population to get involved and do their part in protecting their local water resources. While working on the project, she was surprised at how easy and simple it was to put together such a comprehensive story map. 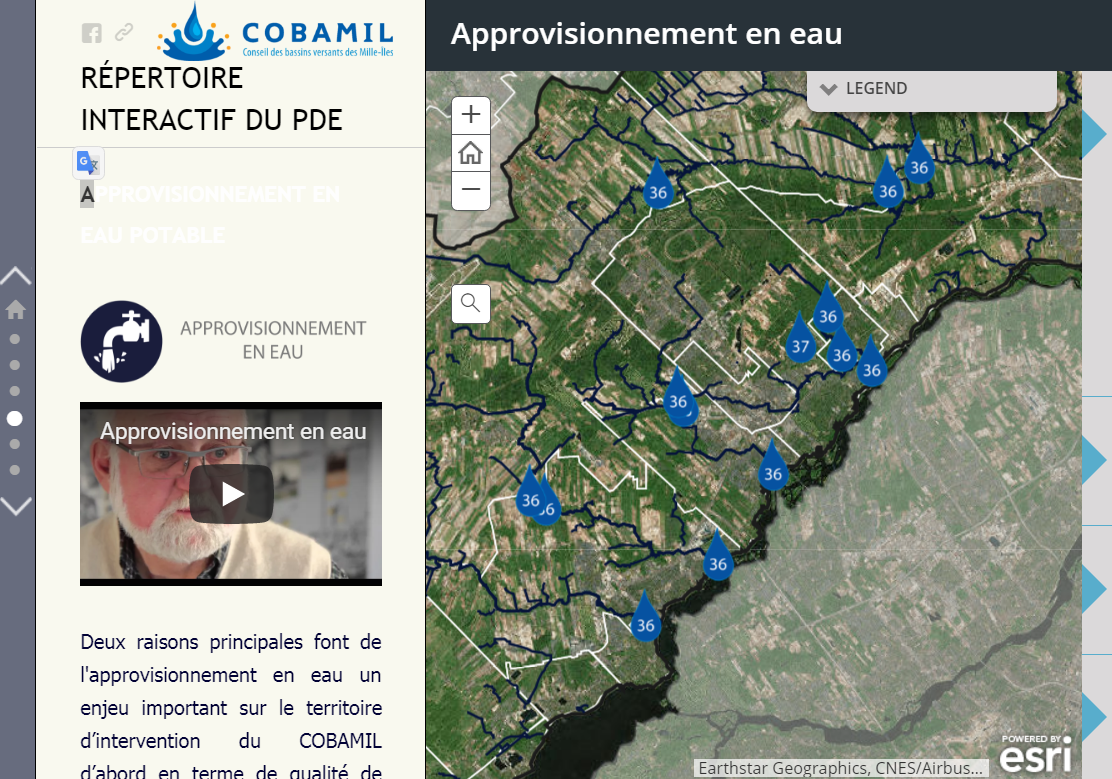 “I’ve been using Esri geographic information systems since my time at university,” says Cynthia. “I’ve used it as an intern, and when I started at COBAMIL, I insisted on using ArcGIS. I’m amazed by the ease of use and ArcGIS’ capacity to scale up any project.”

Cynthia highlighted various advantages in selecting ArcGIS as the tool to help COBAMIL promote water preservation awareness, such as ease of use, time savings/speed of development and increased productivity. However, chief among them was ArcGIS’ compatibility with many data formats such as Excel.

With the success of her story map, Cynthia hopes this will push municipalities in Québec to act and collaborate with other communities on how to best protect their natural areas. She also wants to raise awareness among citizens.

“I want to empower people to do their part in improving water quality, when maintaining their lawn, disposing of used water, etc. They can also share photos via the story map on how they do their part directly,” adds Cynthia.

So far, the story map has received great feedback from COBAMIL staff and they are excited to see how people will use it when they launch it today to coincide with World Water Day. In the future, Cynthia plans on using crowdsourcing to create even more engaging story maps.

Don’t hesitate to share your thoughts and impressions about the “Répertoire interactif du PDE“ app. Leave a comment below.